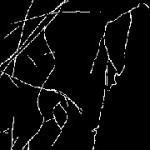 Environment. Rock n. 1 of the Vermelhosa Valley (Côa Valley area) lies at 180 m altitude, on the left orographic side of the Douro River, which is flowing few scores of meters below. The Douro is now 10-20 m higher thanks to the Pocinho dam, situated 6 km down in the valley. The surrounding hills are (mostly were) covered by a terrace-cultivation of olive-tree, almond-tree, and a large extension of vines producing the best Porto wine. The climate is very hot and with no rain during all the summer.

Lithology. The rock, having survived to the destruction caused by the terrace creation, looks like a red vertical smooth panel, 7.50 m large and 3.30 high, facing SSE. It’s a Greywacke Ordovician Schist, Desejosa Formation (see better detailed description in J. A. Bravo Nunez text), a metamorphosed oceanic clay and sand not soluble in water, and so not affected by erosion. Thus being very stable and smooth, the panel is crossed by a lot of multi-plane fractures, which subdivide the body of the rock in various polyhedric blocks. These blocks can be displaced by various factors (tree roots, tectonic movements, water action). So the engravings are perfectly preserved, unfortunately sometimes showing the loss of some entire sectors. Other times we can find the same figure subdivided along two different surfaces, now not at the same plane.
The surface is also affected by many (not very large) vertical lines of percolated concretions, which sometimes overlap the engravings.

Engraving technique. All the engraved figures are done by very fine scratched lines (described in Italian with the term of “filiforme”, it means like a thread). The internal colour of the engravings can be darker, lighter, or the same as the external surface, depending a lot on percolation and vegetal or mineral alteration. Anyway it’s very clear that a well defined kind of figures (horses and warriors, see the Iron-Age section by A. Fossati) are much lighter (“white”) than all the others. All the figures can be easily obtained by a stone or a metal point. The lighter figures show longer curved and less deep lines (as if executed only by a light scratch, and not engraved), and so they were probably obtained by a metal point (a little knife is sufficient), In the other figures we can find a lot of best detailed particulars, as for example the whiskers of a gazelle-like figure. We can sometimes find a deeper point at the beginning of the line, probably caused by the first impact of the stone tool.

Superimpositions. Thus it’s sure that many superimpositions between figures lie on the rock surface, it’s quite impossible to detect them without a microscope. The most noticeable evidence is that the already described lighter figures have been executed after the darker ones. But if we look attentively at the intersection of the lines we can notice that the newest ones don’t cut the oldest: they simply “jump” across. It means that they were executed with a minor pressure. It also means that, if the internal colour of the engraved lines was the same, we wouldn’t be able in a technical way to detect any priority. We can only detect which figure has been executed with a harder pressure.

Recording techniques. The rock surface has been divided in two sectors. Sector “A”, on the right side, has been completely traced (1996, September) on 19 standard plastic sheets (contact transparency method, see related text of B. Campos). Also J. Kolber’s sketching method was partially utilised. Pictures has been taken with natural and artificial grazing light, searching with the sun and the mirrors to obtain the best “visibility” of the engravings, in other ways very hard to recognise. Both for the Rupestrian Archaeology and the Geological parts specific rock records were filled.

New discoveries, figures and styles. The final result of the tracing shows a huge and close intersection of hundreds (thousands?) of scratched lines. Particularly the central area is completely filled. We can find the first engraved lines a few centimetres up to the soil level (corresponding with the mother-rock level). The upper lines has been executed higher than 2.50 m, thus utilising artificial stairs (or something like them). The rock is now under study, and all the figures not yet entirely recognised. For the moment we can recognise:

More figures will be surely identified after the complete study of the tracing. We have not here the space to discuss in particular each point. For the moment it’s important to notice that:

As already stated in the introductory part, all these kinds of figures are well present in Palaeolithic cave or mobiliar art.
The superimposition of the (late) Iron Age figures shows without any doubt the priority of the Palaeolithic-style figures.
The discovery of new elements, not yet identified in the Côa Area (female figures, probable extinct fauna depiction), due to the particular features offered by linear engravings, is very important in itself and in supporting a Palaeolithic attribution. This attribution complies for the moment with a Solutrean range, confirming the huge archaeological and scientific importance of the engravings of the Côa Area, and highly contrasting with some dating methods previously applied.
But perhaps the most important and evident fact is that it’s possible that many other engraved areas will be found in the region, As the same lithology also lies outside the Côa Valley. Many of them have been probably (and unfortunately) already submerged by the Pocinho dam. We hope never more.

Vermelhosa, rock 1: sector A, so called "elephant like" figure, under study (Gravado no Tempo tracing)

Vermelhosa, rock 1: sector A, gazzelle like figure, notice the whiskers and long fine subtle spear down (Gravado no Tempo tracing)