The geology of the Douro and Côa Valley 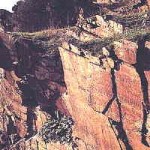 The geology of the Douro and Côa Valley: general aspects of the rock art areas.
RRegarding the morphostructural units in the Iberian Peninsula, the region of Vila Nova de Foz Côa is part of the Iberian Massif, a fragment of the hercynian block that includes 75% of the peninsular soils, with an altitude of about 600 m above sea level.. 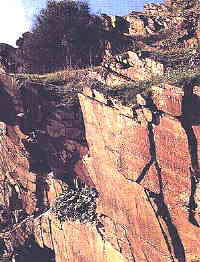 In this area there is a wide presence of metasedimentary rocks of the "Complexo Xisto Grauvaquico" (graywacke schist complex), for this sector denominated as "Grupo do Douro" (Douro Group).

Limited presences of metasedimentary rocks of the Ordovician and the granitic massif of Numão and of Freixo da Numão break the lithologic monotony of the Douro Group, in the north sector of this region. The granites proliferate in the south sector.

The petroglyphs have been engraved on the metasedimentary rocks of the Douro Group, on the edges of the rivers and in the tributary valleys of the Douro and Côa rivers, this last affluent of the first. The Douro Group is constituted of very ancient sedimentary rocks (with more than 500 million years), submitted to metamorphism and deformation phenomena, that have turned them in metasedimentary rocks. The fact that the metamorphism and deposit have been less intense has permitted the geologists to obtain information about the sedimentation background. So it is possible to attribute to the formation of the Douro Group a marine background of deposit, in waters comparatively deep and of turbidity facies, probably corresponding to an area of the continental slope.

The distinction between these three formations is made on the basis of stratigraphical and lithological criteria. So the Rio Pinhão Formation is composed of metagraywackes inserted with thin layers of dark phyllites. The distinctive characteristic of the Pinhão Formation is the green colour displayed by the chlorite phyllites alternated to metaquartzwackes. The Desejosa Formation is defined by the presence of stripped phyllites that are the result of a thin interchanging of dark with clear layers. 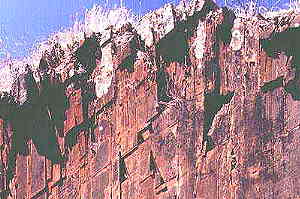 The rock surface of VRM1

These previously described rocks were submitted to deformation and metamorphism episodes: we can find the traces of this phenomenon in the penetrative foliations, in the faults and in the fractures: other tectonic structures are also examples of such traces. Besides identifying synsedimentary thrust tectonics of Sardic age, the most significant tectonic structures, as also the slaty cleavage in the less metamorphic areas, the schistosity in the areas more metamorphic, and the foids, are the result of the hercyninan tectonic action that was in activity between the Middle Devonian (about 390 Million Years) and the Late Westphalian (About 310 Million Years).
The most significant faults of the region extend in the NNE-SSW direction and correspond to the important sinistral wrench-faults in relation to the late hercynian phases of brittle faulting. The Vilarica fault, passing 1 km from Vila Nova de Foz Côa, takes this direction and must be considered as seismically active.

A complex net of recent fractures is distributed along the entire region causing, with the hercynian structures, the deep embanking of the Côa and of the Douro rivers.

The rupestrian nucleus of Vermelhosa Valley

The Vermelhosa Valley is a little valley shaped as a Y, excavated by the runoff water, in an outcrop of the Desejosa Formation. The running waters flow into the Douro river, about 500 m downstream of the confluence of the Côa in the Douro.

The exposed rock is a dark phyllite, very fine-grained, slightly containing quartz. It is constituted essentially of quartz and white mica.

The rock mass is covered by numerous foliations, whose intersection forms a particular grid of detachment planes, responsible for the polyhedral geometry of the outcrops. The bedding, the slaty cleavage and some joint sets contribute to the formation of this grid. The engraved panels correspond to the sub-vertical surfaces of joint, very smooth and regular, mostly orientated N40E.

The weathering action is not very intense; it concerns the exposed surfaces and the foliations surfaces where the water circulates. The alteration fronts, which are spreading from these surfaces to the internal body of the rock are thinner than 1 mm. Thus the rock is not quite altered, the “filiform” kind of the engraving, the majority of which has been executed by scratches less than 1 mm wide and deep, render these erosion phenomena, from the point of view of the conservation, quite troubling.

Another kind of degradation (sometimes the most important) of the engravings is the progressive dismantlement of the panels. This process, mostly mechanical, can have a natural or a human origin.

As already stated, a spatial foliation net goes through the entire rock body.
A kind of natural dismantlement has a vegetal origin: the penetration of the roots inside the schistosity levels diminish the cohesion between the blocks, which can be in this way easier moved by the flushing waters.

The results of the agricultural activity are, in a direct or indirect way, much quicker and heavier, in a particular way because of the dismantlement of the rocky outcrops in order to build containment and terracing stone walls to obtain a larger cultivated extension.