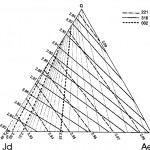 In the case of intact artifacts, though, a totally non destructive analytical method should be preferred, whenever possible. Furthermore, for dishomogeneous rocks, the sample needs to be larger than a few milligrams in order to be representative of the composition. Although the amount of information that one can obtain from the observation of a thin section in optical and electron microscopy is not easily matched by other methods, the procedure outlined here can be very valuable for a non-destructive, quick screening of a large number of samples.

The Göbel Mirrors are a new device, based on a layered crystal, which, mounted on a D5000 SIEMENS diffractometer, transforms the primary divergent X-ray beam into a highly brilliant, parallel beam (1). If the dimension of an object are adequate (up to 60 cm in bulk, depending upon the shape) it can be directly analyzed, by XRPD, without sampling. Even a rough, irregular surface, both on flat and bent objects, is suitable for the analysis. The XRPD analysis is, therefore, totally non-destructive and is obviously very adapt to analyze many different materials, such as pigments, stones, ceramics, metals, patinas, salts efflorescences etc. If a very small amount of material is sampled, the capillary mounting, in transmission geometry, reduces the effects of low peak/background ratio and preferred orientation, greatly increasing the quality of the patterns.
Concerning the “green stone” axes, we have recently demonstrated (2-3), that the position in the XRPD pattern of three selected reflections is indicative, with good approximation, of the chemical composition in the triangle Jadeite (Jd) – Aegirine (Ae) – Diopside (Di) (less then 6% average error).

About 50 axes were sampled and studied by petrographic microscopy in the traditional way. For 15 of these, the SEM-EDS microprobe analyses were carried out, obtaining the elemental composition on several selected points for each of them. The mineralogical composition of the rock was proved to be a bimodal distribution of terms (jadeite (Jd) and omphacite (Om)), of the isomorphous clinopyroxene series. On the same 50 samples, X-ray powder patterns were collected and the cell parameters were accurately measured. The observed ranges of the cell parameter for the two types of clinopyroxene are listed in the following table:

It is well known that the dimension of the unit cell is strongly dependent upon the chemical composition. Since the values reported above show very little overlapping it should be possible to deduce the pyroxene composition from just a couple of carefully selected reflections.

The two peaks (310) and (002) proved to be the best choice, since they depend only upon ao and bo, and co . sin(ß), respectively. Furthermore, they are intense, well separated from other reflections, and occur in a small section of the pattern.

On the triangle Jd-Ae-Q (were Q stands for any other end-member) the chemical composition of samples from the literature was plotted together with the dhkl values of the two selected reflections. Two sets of lines were obtained by joining points with closest dhkl.

In the diagram shown below, a third reflection (-221) was also plotted to double check the interpolated value obtained by crossing the other two lines.

The next figure shows the XRPD pattern of an axe made of both jadeite and omphacite, for which the three above mentioned reflections are shown. From the pattern it is evident that the peaks are sharp and well resolved. By measuring their dhkl and using the above diagram it is easy to estimate the pyroxene composition.

In the left figure the internal consistency of the literature data is shown, in order to check the validity of the procedure. The literature data, coming from single crystal structure refinements, are affected by small errors both on the cell parameters and on the chemical composition. However, the empirical interpolation procedure may be affected by larger errors, due to the the somehow arbitrary interpolation of the points. Since the observed and calculated values should obiously be located on the diagram diagonal, the points spread reflects the error, which is less then 3% in average.

On the figure down, the agreement between the estimated composition for our samples and the one obtained by the microprobe analyses is presented. In this case, both estimated and measured compositions are affected by larger errors. In fact, the individual points analysed by SEM-EDS have different composition due to the clinopyroxene dishomogeneity in the rock. XRPD gives the real mean values of the dhkl for the clinopyroxene range. The microprobe analysis gives an average composition certainly bias, because of the non random nor exhaustive selection of the points analysed. In spite of this, one can see that the predictions obtained are encouragingly good, being the cpx composition affected by an average error less then 6%.

We are confident that by measuring XRPD patterns with a microdiffractometer as close as possible to the spots were the chemical composition was obtained by SEM-EDS this agreement can be further improved, or at least we can verify that the estimated compositions lye in the same range of the spread of the microprobe analyses.
A screening of a large number of “jade” objects carried out in a non-destructive way using the Göbel Mirrors and the above mentioned procedure can therefore be a very powerful tool to define the nature and provenance of the material.

ACKNOWLEDGMENTS: We are grateful to A. Giordano and G. Menges (Karlsruhe SIEMENS Laboratories) for the use of the Göbel Mirrors. To R. Oberti for kindly providing unpublished cpx structures. To M. Venturino of the Soprintendenza Archeologica di Torino for providing the material and archaeological background to this study, and to the CNR Committee 15 for financing this research.