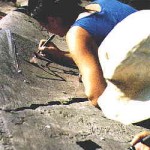 TRACCE no. 6 – by Angelo Fossati

The term Rupestrian archaeology was coined in Val Camonica in 1989 to indicate the need to treat the study of “rock art” as an archaeological discipline, on par with other branches. 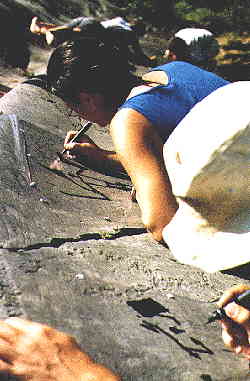 Tracing by transparency in Valcamonica (photo Footsteps of Man)

In recent years the study of rock imagery has seen changes in techniques and analytical procedures: besides the traditional chronological approaches, direct dating methods have also been introduced in Europe and elsewhere.

The approach to the methodology debated in this poster is mainly the result of experiences acquired in that particular petroglyph area that is Val Camonica and the Alpine Range: in any case we believe that most of the points hold good for other rock art sites, despite the fact that each site may have different traits and conditions that must be carefully considered before starting any scientific work. This poster (*) should be considered a sort of critical addenda of Rupestrian Archaeology, a booklet printed in 1990(1).

The investigation of a site or rock with petroglyphs involves a number of steps: some in the fields and others in the laboratory. The first thing is to note on a map the position of the carved surfaces and to compile a form with all the information regarding the rock itself, noting also the state of conservation, stippling patterns, variations in the patina etc…

Records and database: a specific Rock Art application (by Footsteps of Man

Sometimes the rocks have most of their carved area covered by a mantle of soil and/or vegetation (e.g. moss and lichen). What to do? It is sure that this mantle obscures the petroglyphs but moss and lichen growing over the figures could, arguably, contribute some information about their date, and the same could be said for the excavation.

Even if very rarely the covering has any archaeological stratigraphy, we can imagine that, in the future, the development of the studies should bring a technology able to give more information.

So, even if it is not an ethic applied everywhere, it is probably the case of leaving in the rock art sites few rocks or part of carved rocks not studied, not cleaned, not unearthed, waiting for the future generations of rock art specialists.

Cleaning the petroglyphs with chemical agents, even it could be useful in the management of a rock art site with a tourist impact, must be considered dangerous and probably contaminating (and in this sense destructive), if we think of the possibility of a direct dating. 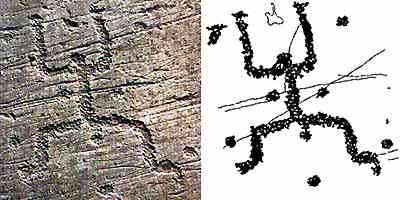 Once the visibility of the petroglyphs is assessed the next step is to trace the figures. The easier and best way to record a petroglyph is to use transparent plastic field sheets, commonly cut to standard sizes. Stippling and scratching figures are generally traced in black, while red is used to show cracks and natural striations.

The engravings are best seen in natural grazing light, but, where these conditions are impossible, the use of mirrors can help the highlighting. Also artificial light can be useful, in the night, or, if it is possible, in the daytime, after covering the rock with a big black and thick plastic sheet.

While drawing a pecked figure the tracer should follow the dots of the pecking, without colouring the inside completely in black.

In the case of superimposition within the engravings the last one (the more recent) should be copied first: the other, covered by this, should be traced leaving a very small piece of pecking or scratching: the iconographic effect is normally good and in the scientific publication one can recognise the perception of the superimpositions. Another technique is to trace using different colours, but the problem is to understand the phases of the drawing before the tracing, something not easy also after the drawing has been finished. Other documenting techniques, such as rubbings (or frottage) are not as precise as tracing: the superimposition within the figures and the distinction between the carvings and the natural fractures are often not clear. In any case the frottage, if repeated continuously on the same figures, can be considered a destructive technique, and can cause the abrasion of the peckings.

In recent years stereo-photogrammetry has been sometimes adopted as a tracing technique (for example in Lombardy and in Veneto regions, northern Italy): unfortunately the figures were traced only with a contour (like in the drawings of the first rock art scholars!), or filling completely in black the inside, without the evidence of the peckings.

Sometimes the differences between the natural cracks and the figures are not clear, as well as the superimpositions. The problem is that the drawings of the stereo-photogrammetry were not made by rock art specialists. At the moment the results that we know are very far away from the current standard of tracing requested by the scholars.

Stereo-photogrammetry can surely be used for other purposes, i.e. to understand the state of conservation (impact of the microflora or the consumption of the engravings).

Rupestrian archaeology: the way ahead

The study of rock art is certainly the archaeological field most in need of interdisciplinary studies. The introduction of direct dating techniques (microerosion, AMS, cation-ratio, etc...) cannot erase the use of the usual dating techniques: the analysis of the style, the study of the superimpositions, the comparisons between the objects found in the materials and in the rock imagery.

The controversial direct dating obtained by different scholars on the Palaeolithic engravings recently discovered on the rocks along the river Côa in Portugal underlines once more this need for interdisciplinary fields.

(*) This paper was presented as poster at U.I.S.P.P. XIII Congress, Forlì September 1996