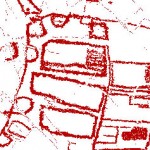 The topographic engravings in the Alpine area represent an important constant, not different for cultural valency from that constituted by the representation of weapons first and duels afterwards. A geographical constant that, as has been seen, enjoys a vast diffusion. A chronological constant that, while with some interruptions, extends from the pre-remedellian period (Final Neolithic-first Copper Age) to the middle Iron Age. 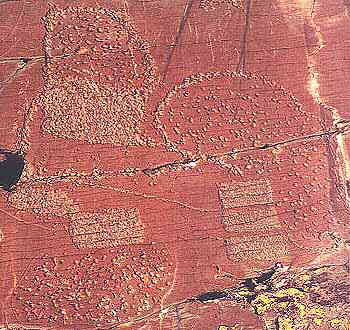 Evidently it is a stylistic phase which, while presenting undoubted features of chronological priority, goes alongside other great thematic groups and that itself constitutes a precise thematic vein, bearer of mark and of meaning.

The topographic engravings undoubtedly represent the ground, ploughed and settled.

They are indisputably linked with a process of settlement and therefore are on the side of the shepherd-farmer, on a level not contrasting but surely different (or complementary?) from that of the warrior, so well represented by the very long sequence of weapons and duelling scenes engraved on the Alpine rocks.

The agriculture theme, that of the working of the land, of the adaptation of the ground to human requirements, of its "conquest" and of its becoming possessed perhaps in a pioneering way finally occupies a big thematic box which in no way could be absent.

The already quoted chronological priority of part of the topographies perfectly matches an economic and cultural area just before the metals age, in which land, breeding and agriculture evidently took the primary role in strategies of sustenance. 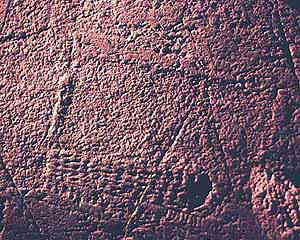 Paspardo town, Valcamonica, the “Rock of the Ghosts”, Copper Age, very faced. To notice the rectangular elements and the aligned dots (photo Arcà -Footsteps of Man)

The iconographic point of view itself can facilitate understanding of single semantic elements: the presence of filled or grid rectangular areas can represent the harvested, cultivated, sown or ploughed fields. One must remember, by the way, how certain cereals, and in particular rye, are cultivated within the Alpine area up to relatively high altitudes and how flint lamellae with traces of wear and tear by mowing have been found in the Bego zone at over 2000 m altitude (Gias del Ciari).

The presence in Valtellina of particularly elongated engraved rectangles is in accordance with the particular shape of the fields (cultivated or in hay) still present today in the zone. Whoever in any Alpine valley observes from the opposite side in spring, a newly-ploughed field must observe the geometric shape which stands out as brown in the green of the surrounding grass. The presence of circular perimetric lines, gathered round a rectangular nucleus, recalls the stone erection of walls-enclosures for the livestock around a seasonal construction, planted in a plain pasture zone (or glacial plateau).

The box grids easily accord with a more stable settlement in which the steep ground is adapted by the installation of terraces for the control of erosion and to acquire plain areas for domestic and productive uses (1) . In particular, it is from the Middle Bronze that settlements on top of a rock called “castellari” arise. Similar structures can still be recognized today at the foot of the Cima di Causega, on the southern buttresses of Mt. Bego (2) , where 27 stone “hive-shaped” boxes follow the course of the level curves and enclose a surface of about 4 hectares. Such a structure allowed the consolidation of a steep side, the liberation from the stones of a pasture surface and the creation of suffcient enclosures to imprison and lead groups of ruminants. The presence inside the contoured geomeric areas of “dots” or “macaroni shapes”, often can indicate a group of pasturing animals or a specific horticultural cultivation or the regular piling up, still in use today, of small heaps of cereals or newly-mowed hay.

Vite, Valcamonica, rock n. 20, Copper Age. Here we can suppose a village-map. with a perimetric wall surrounding houses. The eyelets are similar to Copper Age wall bastions, like at Los Millares, Spain (tracing Footsteps of Man)

In the topographies of the Iron Age there appears to be a greater “squaring” of the farming areas, together with a higher division. Taking into consideration the specific features of the sites, perhaps it is possible to recognize the representation of less steep ground on a plain or on territory that is just beneath and assign to them the function of real maps. However, in many other situations an ample direct vision of the surrounding lands is not possible.

Nevertheless, analagous signs are found, almost as if they were done according to a “cliché”. At Mt. Bego (the most evident case is that of the rock called “Village of Mt. Bego) there are symbols that seem to represent a vast settled or cultivated zone, which is improbable due to both the high altitude and the uneven morphology of the site.

Such conditions make plausible the thesis which sees in the topographies an idealized and conceptual representation of one or more settled units or of farming land. Essentially, it is not so much (or not only) a representation of the real as it is a symbolic act, strongly loaded with cultural significance, which in this role can express an act of ritual auspice, made concrete on occasion, or periods of transhumance and consequent absence from the stable settlements or creation of new farming settlements, through the ploughing of a soil which is still virgin

Thus, these engravings can be interpreted as a topography of territory depicted in an act of ownership or on the occasion of people's first occupation of an area or as a well-wishing practice for a happy return. In many cases they represent without any doubt the most ancient maps in Europe.

(*) This paper was presented as a communication at NEWS ’95 (Turin September 1995), Semiotic Signs & Symbols section