The petroglyphs of Santinho Beach 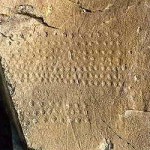 TRACCE no. 7 – by Rodrigo Aguiar 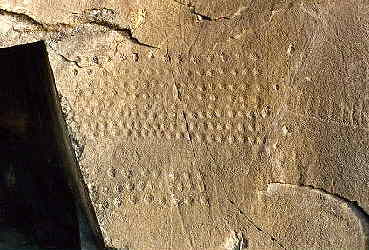 In the southern side, distant about 100 m from the coast rock walls, runs a stream of pure water, which probably satisfied the water needs of the prehistoric peoples.

Until now, we have no proof of settlement in Santinho beach. The nearest site is in the north, crossing the dunes, in Ingleses beach. Those sites have not been deeply investigated, but I can argue, through a surface collection and ceramic analysis, the existence of the Itararé and of the Guarani cultures.

Tracing photographed in escale of 15 cm

The site is not well preserved, and remains of sambaqui show the possibility of a hunters-gatherers preceramic occupation. It’s very strange that we have no vestige of rock art in Ingleses beach, even with favorable conditions such as the abundance of the diabase rock. However, we have a great number of lithic stations (sharp and polished implements), perhaps the biggest site of lithic stations in S.ta Catarina Island.

Making a typologic analysis of the petroglyphs in Santinho Beach, the predominant type is represented by the circles, showing a variation of 8 subtypes and totalizing 20 elements; the most frequent subtypes are the series of filled triangles (silhueta), and between them the double parallel series (repeated 6 times, totalizing 12 elements), which is a theme commonly repeated regionally in the painted decorations of the Guarani ceramic, in the interior of the S.ta Catarina State. Locally we have a corrugate style.

The survey resulted in the cataloguing of 105 engraved figures. Among them we can find not only very well preserved signs but also more faced figures, which we can see only from 6:00 to 8:00 a.m. (from December to March).

The techniques employed are the pecking and the polishing (diabase rock). There are 83 polished engravings, 19 pecked and 3 with both techniques. This demonstrates that in many cases (but I don’t believe in all cases) the engravings were previously prepared by pecking and afterward polished.

About the engraved lines, the largest is 3.3 cm and the smallest is 1.1 cm. Breadth average is between 1.5 and 2 cm. The deepest engraving line reaches 5 mm in rectilinear figures and 7 mm for ensembles of points in series, but the majority is of plain engravings measuring less than 1 mm in depth.

I recorded measures, engraving techniques, preservation, place and name of the site, alterations of the rock, and others points.

Besides photos and slides, plastic sheets in natural size were traced. The traced sheets were reduced by photography and related to a scale of 15 cm. All the information I acquired was placed in a computer, in order to organize a database.

The two first superimpositions may suggest there were two periods of rock art activity, represented by a polishing technique.

It’s really difficult to define clearly the rock art periods, having only 3 superimpositions to analyze. I hope that collecting all the data and analyzing S.ta Catarina Island and adjacent islands under a complete survey, I will be able to reach more reliability about periods and styles of the rupestrian iconography of this region.
Many Thanks to Mr. Andrea Arcà for the excellent orientation he gives me.