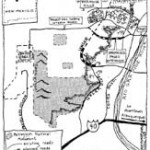 Paseo the Road to Nowhere

TRACCE no. 7 – by Friends of the Albuquerque Petroglyphs

Friends of the Albuquerque Petroglyphs (FOTAP)

Your Letter is URGENTLY Needed to Save Petroglyph National Monument

Sen. Pete Domenici (R-NM) and Congressmen Steve Schiff (R-NM) and Joe Skeen (R-NM) have announced they will introduce legislation to allow Paseo del Norte, a six-lane freeway-type road, to be built through Petroglyph National Monument. By the time you see this alert, identical bills may be introduced in the US Senate and House to delete 8.5 Monument acres for Paseo constuction.

In order to defeat these bills, we need the President and Sen. Bingaman (D-NM) on our side. This can’t happen without your help.

Using your own ideas and some of the following points, write brief letters to Senator Bingaman and the President’s Interior Secretary, Bruce Babbit, urging their strong opposition to any Paseo bills.

1. It would set a national precedent allowing commuter roads to be built through other units of the National Park system. Currently, road construction in parks must serve a direct park purpose. Let’s keep it that way. Paseo uses the Monument like a doormat, serving no park purpose.

2. It would desecrate one of the last remaining major sacred areas for Pueblo Indian tribes. In a desperate effort to save this area, Pueblo leaders have broken their long-standing secrecy regarding their religious practices, for the first time publicly revealing that the Monument is a great outdoor church, a consecrated place of prayer and offerings, and a spiritual center still used today for rituals assuring the afterlife journey of deceased persons. This is unprecedented new information. Road construction in such a sacred area is outrageous. Do we want to keep on repeating our country’s shameful treatment of native Americans?

3. Paseo is a politicians’ road. The people don’t want it. Two polls by Research and Polling showed a consistent two-thirds majority of registered voters in Bernalillo County opposed roads through the Monument, would pay more for routes avoiding the Monument, and wanted the Monument protected without exception.

4. It would promote costly suburban sprawl and could contribute to another round of tax increases. Paseo would be like a hose irrigating runaway growth west of the escarpment, costing taxpayers eight times as much as orderly growth in urbanizing areas, and resulting in other problems such as air pollution. City plans currently recommend against the extension of services for 25-80 years to the area that Paseo would penetrate. Who needs Paseo anyway?

5. There are less expensive alternatives to alleviate traffic congestion and provide for orderly growth without Paseo and Unser. The existing westside road grid is a shambles of inadequate intersections and arterials. Transportation planning expert, Robert Morris, developed a plan that would alleviate traffic congestion by simply adding right and left turning lanes and through lanes to key intersections. Together with widening some existing arterials, Morris’ plan beats the City’s road-building juggernaut hands down. 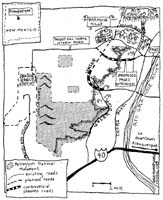 Paseo the Road to Nowhere