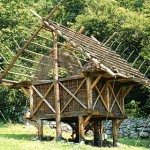 TRACCE no. 7 – by Footsteps of Man

Born in 1946 at Cerveno, a little village in Valcamonica not far from Brescia, Lombardy, after the first studies in a boarding-school in Turin, he attended the Academy of Fine Arts in Bergamo where he could develop the use of particular painting techniques that he produced in his first artistic productions. At the same time there arose in him the desire to approach other techniques, such as sculpture.

The idea of reconstructing different materials came to him during his work as stage designer of the Santa Crus of Cerveno, a living via Crucis acted by the local people which happens every ten years: he was requested to remake the objects and the clothes of the actors who bring objects and dresses like the eighteenth-century statues of the Via Crucis in the local parish church.

During our management of the Museum of Nadro – a rock art exhibition that introduces the engraved sites of the Regional Park in Valcamonica – we asked him to remake three huts, the architectural figures most represented in the petroglyphs of the area. He participated in the experimental archaeology section of our congress “I Camunni tra Storia e Preistoria” (1989) where he presented the reconstruction of the Iron Age chariot engraved in rock 23 of the National Park of Naquane (Valcamonica) and the Bronze Age plugging scene of rock 8 of Campanine in the Regional Park (Valcamonica).

Between 1989 and 1990 he started the first melting of the copper and the fusion of copper and tin to obtain the bronze for daggers, axes and swords.

During our 1st International Rock Art Congress in 1992 he exposed a few metal weapons arousing positive comments on his work.

In 1994 he was requested to reconstruct a few weapons for the important exhibit “Le Pietre degli Dei” on the engraved menhirs of Valcamonica and Valtellina, among them a beautiful remedellian kind copper dagger (fig. 1).
In 1995 the Archaeological Museums of Milan and Bergamo asked him for some objects for two permanent exhibitions regarding the Bronze Age and the metallurgy (fig 2).

Between 1995 and 1996 he reconstructed for the Regional Park of Ceto-Cimbergo-Paspardo (Valcamonica) the Iron Age granary now exposed in the Foppe di Nadro Park (fig. 3). To remake the granary he observed the huts engraved on the 24 of Foppe di Nadro and the real granary found in the site of Brig (Canton Valais – Switzerland) which was very similar to the architectural engraved representations. 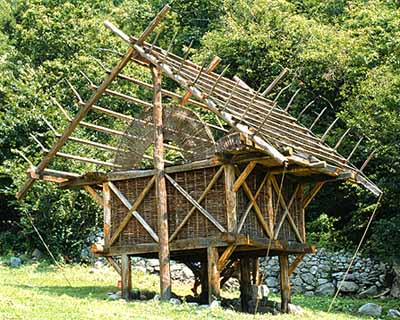 In the first months of 1997 he finished 12 reproductions of objects found in the Roman graveyard of Borno (Valcamonica) now exposed in the Municipality of the town.

Unfortunately and unexpectedly he died on Thursday, April 24, 1997.

We are planning to honor his memory with a great exhibition to be held at the 2nd International Rock Art Congress in October 1997 (see the first announcement).

We hope in this way that his work will be alive and remembered by all the people he knew or simply by all who want to approach his beautiful creations.