Scratched horses in a relief 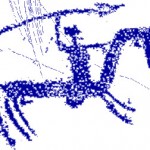 TRACCE no. 7 – by Elena Marchi

Scratched horses in a relief from Cividate Camuno – Valcamonica (Italy). The Camunnian rock art of the Iron Age is characterised, besides thousands of hammered engravings of warriors, hunters, animals, scenes of ploughing, of breeding, figures of houses, engraved with a careful and naturalistic style, also by engravings of inscriptions and alphabet in the so called Camunnian alphabet.

It derives from the Etruscan world and transcribes a language, just that one Camunnian, from the end of the 6th cent. B.C. to the 1st cent. A.D. Between these inscriptions, usually on flat and irremovable rocks, there is one engraved on a slab of sand stone, discovered in Cividate Camuno (1).

It is a fragment of rock on which there is engraved, with the polissoir technique, an inscription in the Camunnian alphabet (also called alphabet of Sondrio), placed between two parallel lines engraved with the same technique.

The inscription divides the slab in two parts, one upper where there is engraved a horse, and one lower with a horse and an anthropomorphic figure.

The different figures and the inscription too are not complete: the slab is broken on every side. Judging from the remains it is probable that the two animals were ridd,en whereas the anthropomorphic figure, in front of the horse in the lower part, could be the squire who leads the horse and the rider (as frequent in the Camunnian rock art , for example on Rock 27 of the Nadro Park, on Rock 60 of the National Park of Naquane or on Rock 20 of Redondo and also as it appears on the processions of warriors on the Situlas).

The horses are represented in the naturalistic style of the IV 3 phase of the Camunnian rock art of the Iron Age. They have inside a decoration with little concentric circles (so called “at eyes of dice”), characteristic of different periods (from the Bronze Age, to the Iron Age and the historic period): in the Iron Age on a lot of manufactured articles there is this type of decoration, for example on the terracotta andiron handle in the form of stylised heads of small horses from the Villanovian settlement in Bologna of the 7th cent. B.C., on the terracotta askòs from tomb 525 of the burial ground at Benacci of Bologna (and of the 8th cent. B.C.) or on the helmet of Negau type etched on the lower band of the Bormio Stela (probably a fragment of a decorated slab of a templar frieze) of the 5th cent. B.C., on the shovel of the tomb 6th of the Ca’ Morta.

The style of the horses is like the style of the figures of rock 35 of Naquane (Figure 2-3), of rock 2 of Bedolina (2), of rock 60 of Naquane, of rock 20 of Redondo and of the rocks of Pià d’Ort. The animals have the muzzle turned lower and the ears almost horizontal to the back; the hoofs are lightly bended for showing the movement. The inscriptions in the Camunnian alphabet go from the end of the 6th cent. B.C. to the 1st cent. A.D.

The association between the inscription and the animal figures in naturalistic style is in favour of a dating to the 5th-4th cent. B.C. rather than of a late dating, to the Roman age (3).

This chronology is derived especially from the comparisons with the scratched and hammered engravings of rock 20 of Redondo and of the rocks of Pià d’Ort. Besides the characteristic representation in different decorative bands (upper a pack of horses, in the middle an inscription, lower another pack of horses) is like in the Situlas Art, in the Villanovian Stelae, in the cited Stela of Bormio or in the Tresivio Stela, where there is an inscription in Camunnian alphabet.