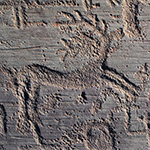 (October 9, 2020, European Day of Rock Art). With its 104 engraved rocks, the National Rock Art Park of Naquane is the main archaeological site of Valcamonica and one of the most important European rock art sites. The best-known rock is the n. 1, called the Great Rock for its size; more than two thousand figures have been engraved over its surface: deer hunting scenes, acrobatic riders, sword duels, women with hands up, wooden barns, ducks, geese and chickens, the mysterious palettes … a virtual tour allow to discover it, to enjoy the panorama, to fly over its engraved figures looking at ultra high-res pictures, tracings and 3D models (PDF available).

From the discovery to the online virtual tour 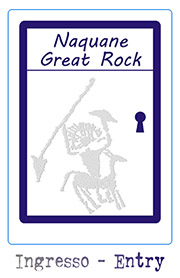 The Naquane Rock Art National Park (Fusco, Mirabella Roberti 1975), located in Valcamonica (Lombardy – Italy), had been established in 1955 by the Archaeological Superintendence of Lombardy (MiBACT-Italian Ministry for Cultural Heritage and Activities and for Tourism), which managed it until 2018, when it passed under the management of the Lombardy Regional Museums Directorate, a peripheral body of the MiBACT. With its 104 engraved rocks, it is the main archaeological site of Valcamonica (Lombardy, Italy) and one of the most important European rock art sites. Over its spectacular sandstone surfaces, a 240 million-year-old clay turned into stone during the geological ages and shaped by the glaciers, more than ten thousand figures are scattered, arranged along rocky tables or waves and sometimes hidden by lichens and patinas. 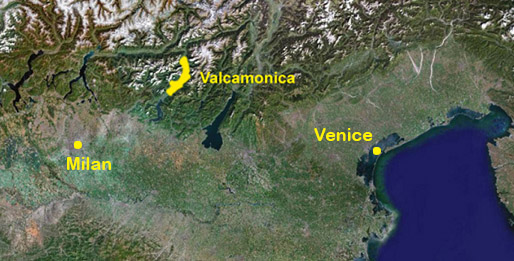 The position of Valcamonica in northern Italy (Lombardy), surrounded by the central Alps

The best-known rock of the Naquane Park, and one of the most interesting engraved rocks of the entire Alpine rock art, is the n. 1, called the Great Rock for its size; coded as NAQ1, it is 34.6 meters wide and 8.2 meters high. 2043 engraved figures, from the recent Neolithic to the 20th century, has been recorded and cataloged over its surface; it is not easy to see them all, even less to remember them. The Naquane Great Rock is also.

The most ancient figures, very few, no more than seven geometric elements, date back to the recent phases of the Neolithic and/or to the first of the Copper Age, 4th millennium BC. Another small group of eight figures pertains to the full Copper Age (first half of the 3rd millennium BC): two human figures, a broad-horned bovid, a geometric shape executed in outline, three uncertain halberds.

The great majority of the others were engraved during the end of the Bronze Age and above all (over 80%) throughout the Iron Age, during the 1st millennium BC: deer hunting scenes, acrobatic riders, sword and boxing duels, women with hands up, wooden barns, ducks, geese and chickens, the mysterious palettes … and more, weaving scenes – unique in European rock art – and a duel connected to a labyrinth, probable representation of the Lusus Troiae, an initiation ritual game tied to the Theseus myth, already testified from the end of the 7th century B.C. and then in the Republican Rome. 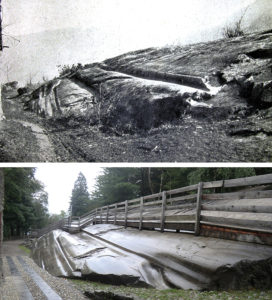 The Great Rock was firstly noticed at the beginning of 1932 by Giuseppe Amaracco, a local guide who worked for Giovanni Marro (Marro 1932), the Piedmontese anthropologist who discovered, thanks to the Amaracco’s surveys, the engraved areas of the left slope of the Camonica Valley. The areas of the right slope of Valcamonica had been discovered a few weeks before, in December 1931, by Antonio Nicolussi, assistant of Raffaello Battaglia (Battaglia 1933), the archaeologist of the Padova Royal Superintendence. 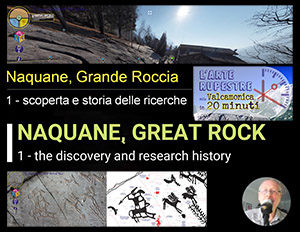 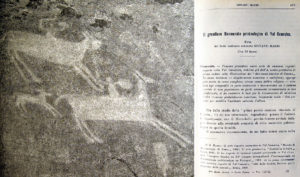 Naquane Great Rock, a photo of the two large riders in the first published paper about the engraved rocks of the left slope of Valcamonica, where also Naquane is placed (from Marro 1932)

In 1935, 1936, and 1937 the Great Rock was studied by the researchers of the German Forschunginstitut für Kultumorphologie (Leo Frobenius, Franz Altheim, Erika Trautmann, Karl Kerényi), who took some pictures, rubbings and drawings, not particularly accurate. These campaigns, which operated as part of a research on the culture of the Aryan race, were financed by the Ahnenerbe – German Association for Research on Ancestral Heritage, a para-Nazi institution run by the head of the SS Heinrich Himmler.

In 1954, on the occasion of the Brescia exhibition devoted to weapons and prehistoric engravings, Emanuele Süss produced various three-dimensional plaster casts of the most interesting parts of the Great Rock; some of them are still today exposed at the Museum of Ceto, in Valcamonica. In 1957 NAQ1 was recorded on wax paper by Emmanuel Anati, who firstly applied a diachronic cataloging of the figures, based on styles and superimpositions, and marked the beginning of a new phase in the Valcamonica and Alpine rock art research (Anati 1960). In the late ’80s and early ’90s, A. Fossati and M.S. de Abreu traced some figures and scenes of the rock to illustrate the informative panels planned by the Archaeological Superintendence. 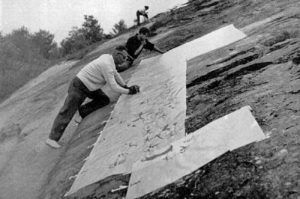 August 1957, the tracing of the Naquane Great Rock, made on wax paper; in the foreground the Anati’s father; behind him, Battista Maffessoli “pitoto“, the guide of Anati in Valcamonica  (from Anati 1960)

The new documentation and the online virtual tour

Feeling the exigency of producing an up-to-date recording of the Great Rock of Naquane, the author (Andrea Arcà, Ph.D.) recently performed a complete contact-tracing, which consists of 221 transparent plastic sheets and covers 65 square meters of engraved surface, fully digitalized in vector graphics (Arcà 2016a, 2016b). 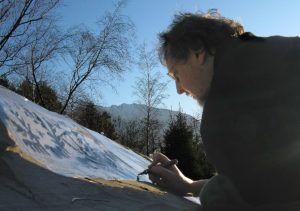 Andrea Arcà tracing figures on the rocky surface of NAQ1 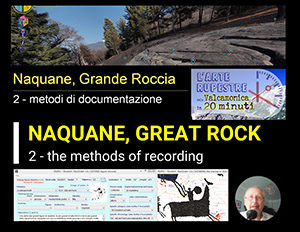 The rendering of the tracing is as essential as an archaeological drawing, clearly showing figures, scenes, and engraving phases; at the same time, it is someway analogous to a cartographic map, symbolized by the means of flat projection, selection of relevant traits, complexity reduction, design and visual effectiveness, ready for communication and publication.

A specific software, RARO-Rock Art RecOrder, has been written by the author to catalog the figures – which are 2043 on the entire rock, mostly belonging to the first Iron Age, VII-VI cent. BC – and to produce an automatic HTML output, enhanced by filtering options and stats. 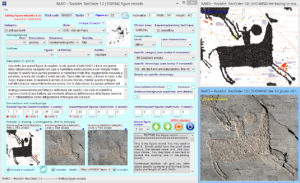 A 3D model of the entire surface has been produced by photogrammetric software, deriving from it a DEM and then a zenith plan with contour lines. Some more detailed 3D models have been produced thanks to the help of Paolo Emilio Bagnoli, Pisa University, using photometric stereo technique, which is able to gain far better results than laser scan for closer views of single figures and scenes. 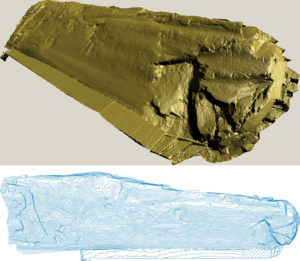 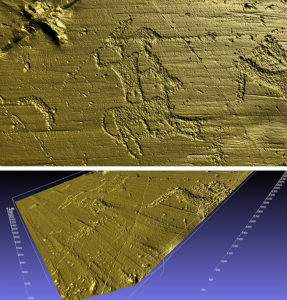 After such a long and complex recording job, the main problem is the large size of the rock, the uncommon extension of the engraved surface, and the consequent huge digital weight of the image files produced. These files, a complete tracing in scale 1:2 at 300 DPI (18×9 m) and a series of ultra high-def stitched photos (68K x 21K pixels for the northern part, 1.4 Gigapixel), can’t be easily managed by a desktop PC, and not at all online. These conditions forced the author to find a way to effectively present all the material collected: the solution is given by tessellation. Such a technique, working with different zoom levels and subdividing pictures in tiles, allows to overtake the visualization limits of the extremely large picture files, like gigapixel .JPG or .PSB, which can’t be shown on the Internet. It can be applied both to spherical panoramas and to flat zenith tracings or photographs. 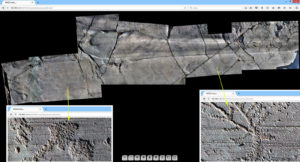 So, an immersive model, de facto an interactive virtual tour, was created, joining four spherical multi-resolution panoramas, 16 ultra-large zenith photo mosaics, the rock art tracings, and the 3D models (photogrammetric and photometric) of NAQ1. The result is an online tool for archaeology and study purposes, useful at the same time to show and to promote worldwide the great richness of the most important engraved rock of the Naquane Park, in Valcamonica. 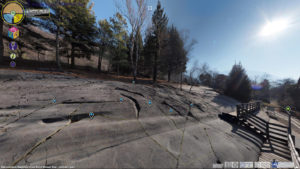 The splash page of the model is like a virtual gateway: by opening the door and entering the virtual tour (once inside, move the mouse and rotate the wheel!) you can plunge yourself into the discovery of the Great Rock, enjoy the panorama, fly over the engraved surface and enlarge it until you can recognize even the smallest details, highlighted by the best grazing winter light.

You may surf it here. Welcome and enjoy the visit! 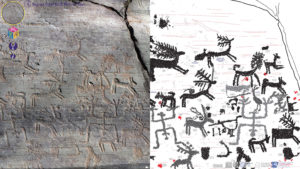 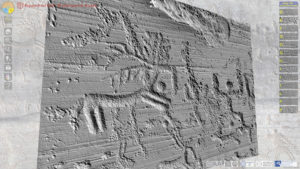 From the interpretative point of view (work-in-progress, unpublished), the author faced a large series of comparisons with the figurative elements present on the archaeological finds contemporary to the Great Rock engraved figures: vascular art, toreutics, tomb frescoes, stone and wood bas-reliefs.

The leading themes seem to be related to weaving scenes, deer figures, weaponed men, and shovels.

The deer hunting/capturing scenes are repeated like a cliché: is it a mythical depiction with a heroic character? ἀσκός 1993.1 red-on-white from Vulci (late 8th cent. BC, Etruscan-geometric style; photo Cleveland Museum of Art) vs NAQ1.i199-201 figures (late 7th-6th cent. BC; tracing AA)

For the first half of the first millennium BC, and in particular for the first-medium Iron Age, the correlation of subjects highlights a dense network of relationships, which place Valcamonica in close relation with the surrounding cultures of the Paleo-Venetian, Hallstattian, Etruscan and Italic areas, without excluding Greek and Near Eastern influences. The almost exclusive provenance of the comparanda from funerary contexts, and to a lesser extent from ceremonial and offering sites, reveals a clear symbolic intent; the choice of the figurative programs suggests a series of much closer contacts than it might seem at first glance with mythological figures and characters.