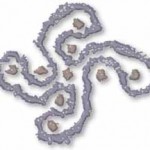 TRACCE no. 7 – by Paola Farina

The motif of the “Camunnian Rose” in the Rock Art of Valcamonica (Italy). Part *. The shape of the so-called “camunian rose”, engraved on several rocks of Val Camonica, consists of a sinuous quadrilobate groove, winding around 9 cup-marks, whose disposition is fixed and is a recurring model; today this pattern is well-known, also because lately it has become the symbol of Lombardia.

A swastika “camunian rose” from Giadighe, Capo di Ponte, related to a warrior of style IV 2

The name “camunian rose”, by now alsdo used in scientific language, is conventional and not completely exact, because the shape doesn’t represent a rose and the word has been used just for its analogy with the petals of a flower; the meaning, on the contrary, is much more complex and it seems to refer to a symbology, which is nowadays difficult to recover and to understand entirely, because we have no longer the interpretation code of these ancient symbols.

In order to have a scientific and complete documentation, we created a corpus of all the "camunian roses" known in Val Camonica: we found 84 "roses" engraved on 27 rocks.

They are placed mainly in the Middle Valley (Capo di Ponte, Sellero, Ceto and Paspardo), but numerous cases are in the Low Valley too (Darfo-Boario Terme and Esine).

We have determined three basic types:

Moreover, for every basic type we have determined some particular types, that we can summarise as follows: complete “roses”, incomplete and others which are difficult to classify because some elements differ from the basic type.

As far as the chronology of the “camunian rose” is concerned, we have gained different elements from the study of the superimpositions and the links with easily datable engravings (particularly men).

We have noticed that all the "camunian roses", that are datable with some certainty (the collected documentation is not always clear), belong to the Iron Age (style IV in the stylistic-chronological definition by R.C. De Marinis and A. Fossati -1-)

There is only one very doubtful case of a swastika “rose” datable already at the Final Bronze.

The first type of “camunian rose” that appears in Val Camonica is the swastika type, documented from style IV 2 (mid 7th – 6th century BC) and which seems to be present not later than the late IV 2 or the beginning of IV 3 (5th – 4th century BC); the asymmetric-swastika type seems to be more or less contemporary with the previous type. The quadrilobate type cannot be dated before late IV 2 (late 6th century BC), because the more ancient engraving related to it is datable at this period, it goes on into IV 3 and is the only type which remains in IV 4 (3rd – 2nd century BC) and IV 5 (1st century BC).

Two quadrilobate “camunian roses”. Bedolina R. 16, Capo di Ponte. Both “roses” are related to a warrior; the first one can be dated to late style IV 2, the second one to IV 5 (Iron Age).

In conclusion, from this information, we can hypothesise the following type-chronological sequence of the “camunian rose”. The motif appears in style IV 2 with the swastika type, which probably sometimes “turns” into the asymmetric-swastika; towards the end of IV 2 this pattern develops into the quadrilobate type, losing partly the idea of movement suggestedby the bend of the arms of the previous types. The development of the quadrilobate type emphasises the static aspect. At the beginning it presents rounding and symmetric arms, then it takes an irregular contour and becomes more and more stiff, until it reaches, in the late period of style IV, a schematic and squared shape, sometimes even without cup-marks, which resembles a cross.

We have singled out some identical or very similar motifs to the “camunian rose” in different European prehistoric and protohistoric cultures.

Some quadrilobate decorative elements with cup-marks, which can be compared with “camunian rose”: two amber plaques from the Jezerine necropolis (360-250 BC); a fibula from the Grossweikersdorf store (8th century BC)

For the swastika type we have just one very precise comparison with a rock engraving in England (Ilkley, Yorkshire), which is really identical, even in size, to the great “rose” of Carpene near Sellero; this comparison was already mentioned by P. Jacobsthal in 1938 -2-. But we can notice vaguer similarities with some whirling motifs, resembling the rotating circular course of the “rose”, even if they are different in such a way (for example, some patterns have more than four arms).

For the quadrilobate type we have a larger number of precise comparisons, that is patterns which show the cup-marks (recurring and essential element in Val Camonica) as well as the quadrilobate contour. They are mainly decorative elements on bronze hand-made objects coming from the alpine area, datable to the Iron Age: two fibulas from the Grossweikersdorf store, in Low Austria (Ha B3, 8th century BC) -3-; some belts of Hallstatt culture, coming from rich women’s graves (Ha D2, 530/525 – 500 BC) -4-; two amber circular plaques, coming from the Jezerine necropolis, in North Bosnia (360 – 250 BC) -5-; a celtic coin of unknown provenance (second half 1st century BC) -6-.

It is interesting to notice that all these discoveries can be dated between 8th and 1st century BC and therefore, from the chronological point of view, they are in accordance with the development of the “camunian rose”. 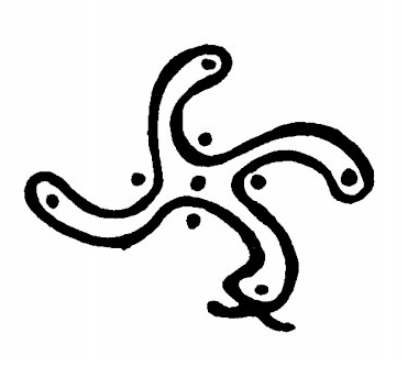 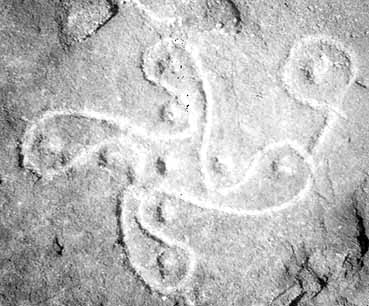 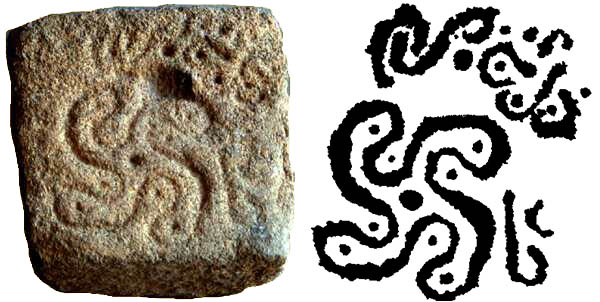 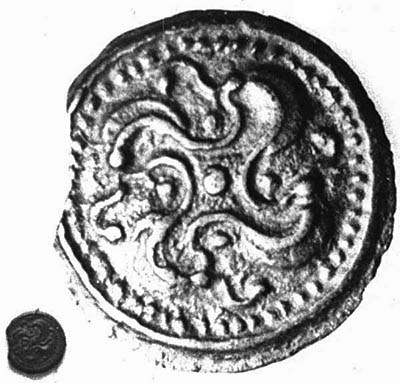