The Sama Valley in southern Peru has only a few rock art sites. This article describes one of those sites, which is located at Coropuro on the south bank of the river. It has a interesting collection of petroglyphs, some of which might be linked to a previously unnoticed geoglyph nearby. 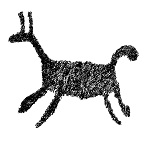 It is a fact that – especially in the coastal deserts of southern Peru and northern Chile (an area also known as the Desert Andes) – petroglyph sites and geoglyph sites are sometimes found relatively close together in the same area. A fine example is the geoglyph at Cíceras in the Majes drainage in southern Peru, which is found only 940 m (as the crow flies) east of the petroglyph site of Cíceras (Van Hoek 2021a). Moreover, geoglyphs and petroglyphs occasionally display the same type of imagery, like the camelids at Cíceras, which mirror several petroglyphs of camelids at nearby Cíceras, and the geoglyphs of Huacán (also in the Majes drainage), which are very similar to petroglyphs at Toro Muerto (Van Hoek 2021b). Attempting to locate a petroglyph site near Coropuro in the Sama Valley of southern Peru using Google Earth, I also noticed a large feature close to the petroglyph site, which possibly represents a previously unknown geoglyph. This study tentatively proposes that the purported geoglyph at Coropuro has possible parallels in the imagery of the nearby rock art site of Coropuro (Figure 1).

Figure 1. The location of the purported geoglyph at Coropuro (oval frame; enlarged in the inset to the right) and the approximate location of the petroglyph site of Coropuro (rectangular frame). Illustrations © by Maarten van Hoek, based on Google Earth.

About 85 km inland from the village of Boca del Río on the Pacific coast of southern Peru (and more than 100 km when following the course of the Río Sama) archaeologist Richard Ochoa Peña – SACRUN SAC (Arequipa) recorded the petroglyph site of Coropuro on the lower slopes of  Cerro Resbaladero in the Sama Valley. Further south of  Cerro Resbaladero the summit of Cerro Caquilluco forms the highest point in the immediate area at 3890 m. To the west of the site there is the deep gully of Quebrada Cobaya. The slopes of Cerro Resbaladero are completely bereft of vegetation (Figure 2), but is strewn with debris, smaller fragments of rocks and some larger boulders of red volcanic stone, which were the target of the prehistoric people who created their images on the rock surfaces. 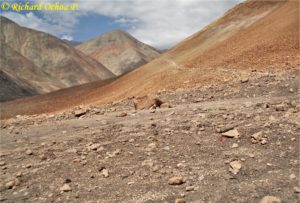 Figure 2. View from the petroglyph site of Coropuro, looking east. Notice the ancient path. The petroglyph boulders are located in the grey-sand area in the foreground. Photograph © Richard Ochoa Peña – SACRUN SAC (Arequipa).

This remote site is not mentioned in the inventory compiled by Rainer Hostnig (2003). But in a publication about Miculla (an extensive petroglyph site in the extreme south of Peru) Gordillo Begazo mentions that there are hear-say records of petroglyph sites in the Sama Valley along a track that connects Coruco (also known as Quebrada Gil; at 850 m asl) with Chucatamani at 2400 m asl (1992: 57, 60; exactly the same text and map appear in Gordillo Begazo 1996: 99, 102), but no further details – like a site name – were available. Finally, the name of the petroglyph site of Coropuro is only mentioned by Gordillo Begazo (2004: 344).

Coropuro is a large boulder field located at an average altitude of 1845 m asl, while the valley floor of the Río Sama to the north (about 215 m downslope) is at 1790 m asl. It is unknown how many boulders have been recorded, but based on the photographs published by Richard Ochoa, I tentatively estimate that there are around twenty to thirty boulders with petroglyphs.

The imagery at Coropuro definitely belongs to the rock art tradition of southern Peru (its northernmost limit being the Locumba drainage) and northern Chile (its southernmost limit being the Camarones drainage). For example, the petroglyphs of (fully pecked) camelids on Boulder COR-008 (Figure 3A) show the same pose and the typical downward bent tail as several camelid petroglyphs at Miculla, 45 km to the SSE (Figure 3B).

Of course, like many rock art sites, Coropuro also has its specialties. Special – and probably unique – is the large central bowl-shaped depression on Boulder COR-001 that is surrounded by four narrow ringmarks and a broad and deeply recessed fifth ring (Figure 5). On the same panel is a deeply carved petroglyph that seems to represent a human head. Because of the T-shaped groove emerging from the top of the head it may well be a “trophy” head (larger arrow and inset in Figure 5). Finally, Boulder COR-001 has a row of four small petroglyphs that just possibly might symbolise vulvas (indicated by small arrows in Figure 5). 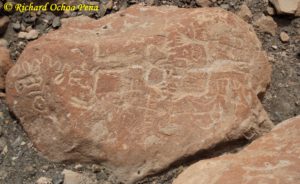 Figure 7. A and B: Petroglyphs on Boulder COR-012 at Coropuro, southern Peru. Photographs A and B © by Richard Ochoa Peña – SACRUN SAC (Arequipa). Inset: Detail of Boulder ROS-024A at Rosario, northern Chile. Photograph © by Maarten van Hoek.

On boulder COR-015 is only one petroglyph. It depicts a fully laterally depicted and fully pecked  zoomorph (a feline?) with dots for claws. Opposite the small boulder COR-009 is a very large boulder (COR-021) with a rather rough surface. It has a large number of petroglyphs among which are a few anthropomorphs and camelids. Remarkable however are at least four petroglyphs that represent the Insignia-Tumi (orange arrows in Figure 8A). They look like footprints of a bird, but I have demonstrated that they are representations of high-status objects, possibly worn on the head or on garments (Van Hoek 2016). A similar motif occurs on Boulder COR-016 and another one on Boulder COR-009 (orange arrow in Figure 8). Petroglyphs of the Insignia-Tumi occur in a rather wide area, for instance at San Antonio in the Yarabamba Valley of Arequipa, southern Peru, 160 km to the NW (Van Hoek 2017) and at the site of Chilpe in the Azapa Valley of northern Chile (130 km to the SSE) (orange inset in Figure 8). On Boulder COR-029 are also two simple petroglyphs of the Outlined Cross, also known as the “Venus Cross” (yellow arrows in Figure 8A). Boulder COR-019 is remarkable for bearing two petroglyphs of animal tracks and a rather complex anthropomorphic figure (Figure 8B).

Figure 8. A: Boulders COR-009, 021 and 022 at Coropuro, southern Peru. B: Petroglyphs of animal tracks on Boulder COR-019. Photographs A and B © by Richard Ochoa Peña – SACRUN SAC (Arequipa). Orange Inset: Petroglyph of one of the Insignia-Tumis at Chilpe, northern Chile.

Finally, there is proof that the site of Coropuro was also frequented by Post-Columbian travellers as is evidenced by the petroglyphs of crosses on altars on Boulder COR-018 (Figure 9). Similar crosses have been recorded at Alto de Pitis and Toro Muerto in the Majes Valley. 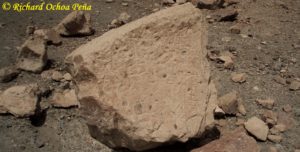 At the moment only three rock art sites have been recorded in the drainage of the Río Sama: Coropuro, Quebrada Gil (also known as Coruca) some 29 km to the SW of Coropuro, and the rock art site of Anajiri, 24 km to the east of Coropuro. All three sites belong to the same rock art tradition and most likely indicate an ancient route from the coast to the highlands (and vice versa). So far no examples of geoglyphs have been recorded in the Sama drainage, but just possibly very near the petroglyph site of Coropuro one geoglyph may have been constructed.

The Possible Geoglyph at Coropuro

Because geoglyphs (not a form of rock art) are usually very large, many can easily be recognised with the aid of Google Earth. This way I discovered a geoglyph in the Nepeña drainage in northern Peru (Van Hoek 2015) and with Google Earth I could locate the Huacán geoglyphs in the Majes drainage of southern Peru (Van Hoek 2021b). When trying to locate the Coropuro petroglyphs, I also spotted a remarkable feature about 250 m WSW of the petroglyph site. It is found just below an ancient path that runs from east to west. The purported geoglyph runs vertically uphill. Moreover, the lower end ends abruptly (the upper end is blurred). Therefore it is very unlikely that the structure is a road, like the geoglyph at Cíceras in the Majes drainage (Van Hoek 2021a). The structure comprises two narrow, parallel walls (roughly 5 to 6 m apart) of about 20 m in length (possibly longer), located between 1845 and 1865 m asl (Figure 1). The lower, north end of the purported geoglyph is about 285 m south of the valley floor of the Río Sama (at that point at 1795 m asl). Unfortunately the layout of the upper (southern) end of the structure is obscured by debris, possibly caused by minor landslides. Importantly, it seems that the two walls have a small curved end at the lower end. Especially these curved features seem to offer a clue as to the nature of the purported geoglyph.

The Geoglyph – Petroglyph Connection at Coropuro

Despite the huge difference in size and in layout there still may exist a link between the Coropuro geoglyph and some of the nearby petroglyphs. Notably two anthropomorphic petroglyphs show characteristics that seem to mimic the geoglyph (or vice versa, of course). In rock art sizes are often exaggerated. For instance, the anthropomorphic figures on Boulder COR-009 have short legs, but one has an exaggeratedly long neck (see Figure 4). However the “strange” Anthropomorph 1 on Boulder COR-004 has extremely long legs that – moreover – both end in curved features that most likely represent the feet (Figure 10A). It has a small, fully pecked head and apparently only one arm (?) that touches (unfinished?) Anthropomorph 2. The long groove between the legs (too long to symbolise male sex? or an unfinished feature?) is still enigmatic. Just possibly the long groove is the body (without legs), while the two long lines might represent excessively long arms. However, this careful suggestion is contradicted by the anthropomorphic figure on Panel COR-008.

Even more interesting is the anthropomorph on Panel COR-008 (Figure 10B). It has a square, outlined head and two curved arms that seem to end in a cupule. Above the head is an undulating  line that may represent some kind of headgear (or hair?). The figure seems to have no thorax, but from the shoulders run two long parallel grooves that both end in curved features that – again – most likely represent the feet. I very tentatively would like to suggest that the extremely long legs of those two anthropomorphic figures may be related to the very long lines of the geoglyph, which might represent the legs (and feet) of an intended anthropomorphic geoglyph. The thorax and head may never have been finished or have been blurred by debris.

The petroglyphs so far recorded at Coropuro are of interest as they unambiguously confirm their relationship with the rock art tradition in this part of southern Peru and northern Chile. Especially the “flute-player” on Boulder COR-004 is key in this respect. Also the style of the camelid petroglyphs is similar to those at many other sites of this rock art tradition.

Whether the geoglyph indeed was once intended to represent an anthropomorphic feature is most uncertain at this stage, but the resemblance with the long legs of the anthropomorphic petroglyphs on Boulders COR-004 and COR-008 is striking. Scientific research regarding the geoglyph will be necessary in order to establish the possibly anthropomorphic nature of the structure.

The author is much indebted to archaeologist Richard Ochoa Peña, gerente general of SACRUN-SAC (Arequipa, Perú) for his kind permission to use his photographs in this article. However, the content of this study is completely my responsibility.