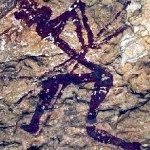 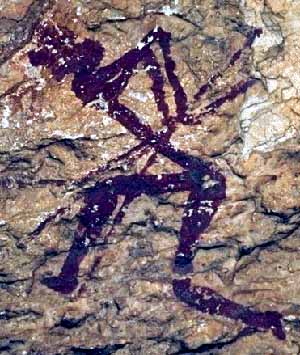 From 1992 onwards, a research Project is being carried on with the support of the DGICYT and the CSIC. The main purpose of this Project is a methodological one: the evaluation of the scientific and documentary possibilities that new techniques such as digital image processing offer to the study of prehistoric art and its conservation. The above mentionedArchives are the data base of this research.

The immediate objective is to ensure the conservation of the present photographic archives and to transfer their contents to digital media. The creation of an integrated information system, made up of a bank of digital images, and a group of documentary data bases will guarantee a system of permanent access to the valuable documentary funds of the archives for all research workers.

In addition, several experimental programmes are being developed to solve methodological problems on the technical processes of rock art,. From the results of this research important contributions to the solution of conservation and dating problems of rock art are expected.

This is the name given to the figurative rock art found in open air sites dating to the Post-Palaeolithic era in the East of the Iberian Peninsula (see map). The paintings always appear in rock shelters, illuminated by daylight, and found in ravines and gorges well above sea level (400 to 1000 meters).. The first discovery was made by Cabre in 1903 (Calapatá, Teruel), and a great number of new paintings have appear since then. However, the deterioration of this rock art are increasing so quickly due to both environmental factors and visitor erosion. 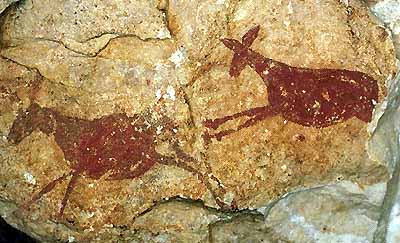 Hunting and battle themes are most common, although scenes of food-gathering, dancing, and rituals are also found. Warriors armed with bows and arrows and women dancing or gathering are the most important figures. Sometimes it is possible identify different tools and the clothes used by these people. Between animal figures the most commonly depicted are deer, goats and bovines, some of them with arrows in the body, as if they were hunted.

The colour used were mainly red, although black or white appear less frequently. The size and position on the rock wall is varied, giving a greater sense of movement and expressiveness. On the other hand, you can find in the same rock shelter micropaintings (5-6 cm) and lager figures, up to 50-60 cm.

The chronology of these paintings has been widely debated. Originally researchers such as Breuil and Obermaier believed they were contemporary with Franco-Cantabrian Cave Art, and dated them to the Upper Palaeolithic.

Other authors, including Hernández Pacheco, Almagro, Ripoll and Beltrán, claimed that they were produced in a later, post-glacial period, during Epipaleolithic times. This proposition was accepted until the 1980s when Macroschematic Style was discovered, example being found under paintings of the Levantine type.

The similarity between macroschematic and the decorative themes found on cardial ware (Early Neolithic) has made it necessary to reconsider the chronology of Levantine Art, and this must now be dated as beginning in the Early Neolithic.

This collection, created during the early 1970's, is made up of nearly 7000 photographs and abundant complementary documentation covering 99 rock art stations classified into 44 groups.

Its great importance as a documentary collection is reinforced by the fact that it contains information on heritage which has suffered considerable deterioration in recent years. The original project was funding by CAYCIT (Education and Science office). An equipment of several archaeologist were working between 1971 and 1976 under the direction of Dr. Martín Almagro Basch, All the pictures were made by the photographer Fernando Gil Carlés, who sometimes used special films to record the paintings. A general view of the rockshelter usually was include in the photographic list of each site, and all figures was recorded using a serial number. Drawings, plans and a general description with the colour, size and type of the figure complete the information compiled.

The Corpus does not include all the Levantine Art paintings, as since it was finished new sites has been discovered. However, most of the important ones, such as Albarracin, La Valltorta, Cogull or Cingle de la Gasulla are included and all the trends and styles are represented. Therefore, It is of great importance for researches.

One of the main objectives of this project was to prepare a digital version of these photos to make them more widely available, protecting at the same time the original films. For this reason the digital option seemed the most effective option to ensure interchangeability and accessibility for the future, while maintaining sufficient quality in the results.

Although there are many technical options for digital image processing, we have chosen for the development of this project one of the most extended commercial standards: the Kodak Photo-CD system.

There are two main reasons for this choice:

Location of the rock art sites in the AAR

The accuracy of a digital image in relation with the analogic image that it represents could be measured in terms of RESOLUTION: the size of the original surface (measured at its own scale) that is stored in the digital matrix as a single code (usually measured in points per inch [ppi] or in micras). Levels of resolution are in direct relation with the size of the digital matrix containing images.. The Kodak Photo-CD system offers 6 levels of resolution, from 128×192 to 2048×3072 and one more level to work with special equipment.

Since the final aim of this project is offer an useful tool for the researchers and avoid to handle the original documents in the Archive, all the information related with the rock art paintings is now under a Database construction. We chose Microsoft® ACCESS 7.0 program to implement an specific archive, combining different tables and the digital images. In this new archive we include not only the topographic references to the original documents but both geographical and artistic description of these paintings and bibliography.

An Information System allow the integration of both contextual data and digital images, offering the opportunity to search for combined toponymic, iconography and/or contextual criteria. We are also preparing an electronic paper inhtml format about all the Corpus in order to publish it ininternet.

As first step, an advance of this work has been showed in the International Seminar “Conservación y difusión del arte rupestre al aire libre en ambiente mediterráneo” held in the Museum of La Valltorta between 20-22 May. We hope all this work will be ready for internet users before the end of 1997.