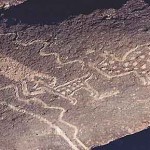 Together with Elena Miklashevich of Kemerovo, Siberia, I paid a visit to the Toro Muerto petroglyph site, Peru, on 18th April 1997, in the company of a commercial tour-guide and also of Eloy Linares Malaga, who first brought the site to the world’s attention over 40 years ago.

The setting — the desert landscape — is absolutely fantastic. However, our first reaction was of surprise at how few petroglyphs there were. The hype (“the world¹s biggest petroglyph site, etc, with 100,000 glyphs on 4000 rocks”) had led us to expect something like Three Rivers (New Mexico) or the Burrup Peninsula (Australia) with glyphs on every rock, so that one would not know which way to turn.

At Toro Muerto, the vast majority of rock surfaces are empty, and distances can be considerable between decorated rocks. In fact, at times Elena found herself saying “Where are all the petroglyphs?” We have no doubt that this is an extensive site, with rocks scattered over 4 km, but she tells me that Siberia has examples of petroglyphs extending more or less continuously for greater distances than that. In addition, even accepting the figure of 4000 rocks, a total of 100,000 glyphs (and I note that the Nuñez Jimenez book makes no such claim) would mean an average of 25 glyphs per rock.

The vast majority of Toro Muerto rocks contain only a handful of figures; and the number of rocks we were shown containing numerous motifs (though never more than a few dozen) was small — maybe a dozen or fifteen. Linares reckoned that we had seen a representative sample, of about 20% of the site. So our best guess is that, even accepting an extent of 4 km, and a figure of 4000 decorated rocks, the total number of glyphs is probably a few tens of thousands at best. Probably less. So although it is undoubtedly a major site, and the most important in Peru, it is far from being the world¹s biggest. This is just hype.

That is a minor point. The crucial issue is how to save it from destruction. We were shown evidence of natural damage (erosion) and of manmade damage (graffiti; broken rocks), but there did not seem to be much of the latter, especially once one was away from the area nearest the village. 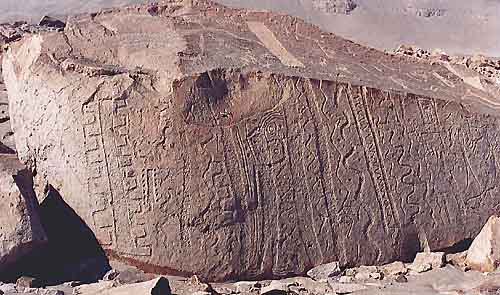 It is not easy walking or climbing on the Toro Muerto sand, and it would be a really determined vandal who ventured very far into the site to do damage — we saw no evidence that this had happened.

Linares makes much of the threat from an irrigation ditch which has been dug. I asked him repeatedly — including through the interpreter — to state precisely what the threat to the site was, since the ditch seems very small to me, and besides it is far from the vast majority of the site (which is moreover at a far higher elevation). He was very evasive. With Côa in mind, I asked if he was worried that the rocks would go underwater, since this seemed impossible. He finally stated that his worry was that, if the irrigation project went ahead, the locals would simply be encouraged to continue damaging or removing the rocks. This seems a very vague worry.

As Linares points out — and as has been mentioned in his piece in INORA, as well his more recent plea written with Matthias Strecker — the local church was built in 1722 with stones which probably included some petroglyph rocks; and when Linares first came to the local village in 1951 he found that other petroglyph rocks had been used (at some unknown date) in building an outhouse there. He also claims that there have been instances of damage or removal of rocks since 1951, though these seem less well documented. But in any case, it is clear that the nibbling at one edge of this vast site has been going on for decades, if not centuries, which is sad but not unusual.

I had hoped and intended to launch a press campaign on my return to try and save Toro Muerto, but my visit showed me that this is absolutely impossible. Any newspaper or magazine editor would ask me “what is the threat to this site?”, and since there is no specific threat of the Côa type they would laugh in my face. Nobody is going to print a story about a site where people have removed or damaged blocks occasionally over the past few centuries.

The only course of action open to the rock art community is therefore, in my opinion, to follow Matthias¹s guidelines in the published pleas, and for individuals or organisations to write to the Peruvian authorities and ask them to install some kind of guardian or visitor centre. However, I feel the chances of success are very slim. 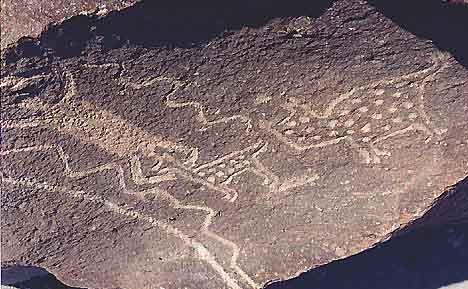 First, a building was erected some years ago, but is now abandoned. Second, the tour guide informed me that hardly any tourists visiting Arequipa bother to go to Toro Muerto — instead they all go to Colca Canyon for the scenery and condors. This is undoubtedly true — Arequipa has absolutely no postcards or other information available on the site. So the cash-strapped Peruvian authorities are highly unlikely to spend lots of money on something that nobody visits — and of course trying to publicise the site and bring in coachloads of tourists would bring new problems.

The best long-term solution for Toro Muerto's survival (or at least the survival of the small part which is within easy reach of the village) is to educate the locals about the importance of the glyphs, so that they police the area themselves.