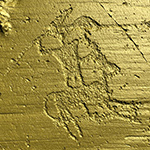 Worldwide, Paolo Emilio Bagnoli, former full professor of Photonics and Optoelectronics at Pisa University, is among the few researchers active in the rock art field to apply to engraved rocks the method of 3D modelling on a photometric basis. As a tribute to his memory, it is appropriate to remember him in his own words in relation to the photometric technique applied to 3D modelling (PDF available).

by Andrea Arcà – Footprints of Man

Worldwide, Paolo Emilio Bagnoli, former full professor of Photonics and Optoelectronics at Pisa University (Information Engineering Department – Italy), is among the few researchers active in the rock art field to apply to engraved rocks the method of 3D modelling on a photometric basis (Vanzi et al. 2016).

He passed away on January 12, 2023. As a tribute to his memory, it is appropriate to remember him in his own words in relation to the photometric technique applied to 3D modelling.

“Photometric 3D models are considerably more efficient than photogrammetric ones, returning the 3D values of each pixel of the source photographic shot; photogrammetric 3D models, on the contrary, are limited to the recognised tie points on the rock surface, which are about fifty times smaller in number, compared to the pixels of the same 3D modelled area; basically, in photometric 3D, the spatial resolution of the model corresponds to the dimensions of the individual pixel. 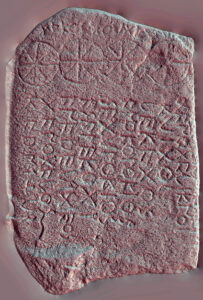 Photometric 3D has its basis in mathematical optics. It uses only four digital photographs, with the camera stationary in the zenithal position with respect to the rock surface intended as a Lambertian surface. The four photographs are taken with the light source in the four cardinal directions with respect to the camera pose and with an identical alpha angle with respect to the rock surface. The light reflected from each pixel of the four images depends on the albedo of the rock and the local slope (gradient) with respect to the x and y coordinates of the images (dZ/dx and dZ/dy). It is, therefore, possible to separate the two contributions obtaining on the one hand the gradient map (thus due to morphology alone) and on the other hand the albedo map without the contribution of morphology. The 3D surface of the object, i.e. the matrix function Z(x,y), is obtained by the integration in two dimensions of the sum of the gradients (dZ/dx + dZ/dy).

The density index of a photometric 3D model, in correlation to the captured area, is determined by the combination of the camera sensor and lenses and by the shot distance and zoom level. Even little pecked dots and fine glacier scratches are recognized within the models, which may compete in quality and effectiveness against the best overnight grazing-light pictures, offering moreover a gain in levelling out enlightenment and colour conditions; such results are very well performing, combined with tracings, for publication, communication and exhibition purposes”.

While photometric models are suitable for covering limited and planar surfaces in great detail, photogrammetric models, on the other hand, are better suited to cover larger surfaces, so rendering the volumetry of an entire engraved rock, or of very deep, more markedly three-dimensional engraved signs, which cannot be easily treated with the photometric method.

3D modelling on a photometric basis has been applied by Paolo Emilio Bagnoli to some important engraved and inscribed rocks and stelae in northern Italy. Mention may be made of the splendid and highly detailed models of some sectors of the Great Rock of Naquane (Arcà 2022) in the Capo di Ponte National Park in Valcamonica, as well as that of the Briona stele, the most important epigraphic document in Cisalpine Celtic.

Farewell dear friend, may the earth be light to you and may the light be with you.