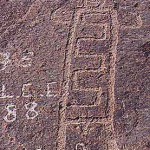 TRACCE no. 8 – by Matthias Strecker

Toro Muerto Paul Bahn’s report of 30/4/97.
Paul Bahn reports on his visit to Toro Muerto on 18th April 1997, together with Elena Miklashevich, in the company of Eloy Linares Málaga (ELM). He rightly states that the number of engraved figures has been exaggerated by ELM. 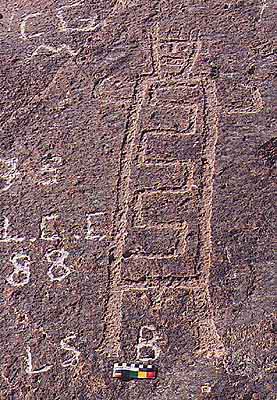 The same point was already taken at the congress at Cochabamba, during Symposium 4, where we consulted Robert Bednarik who had previously seen a large part of the site. Someone present at the time said that an exaggeration might help to draw attention to Toro Muerto. Personally I do not find this necessary. We all agree that it is an exceptionally large site and definitely a very important one.Toro Muerto petroglyph (photo Elena Miklashevich)

Paul states that so far vandalism is limited. I am glad about this opinion. Actually, he has probably seen more of the site than I did though I believe I saw a good portion of it in June 1996, when I was appalled by existing vandalism. And there does not exist any policy, management or any means whatsoever to stop destruction of the site.

I agree that there is no imminent danger from the irrigation project which apparently has not yet begun to affect the petroglyph site. However, I do feel that there is a serious possible threat to the site by settlers. In June 1996 ELM and I stated that a plantation of fruit trees and construction of a hut existed right at the border of the site.

I also agree that tourism to the site is (still) scarce, but it does exist. The petroglyphs are mentioned in several international tourist guidebooks and I was informed about tourist visits by a taxi driver in June 1996. In the article I wrote on Toro Muerto in collaboration with ELM, we suggest that a permanent exhibition be set up at the village Coriri. Of course, this should be part of a plan to protect the site. If only a part of the site would be effectively protected and would be prepared for tourism, this might safeguard a significant portion of these petroglyphs for the future.

Though to my mind it is extremely unlikely that one day Toro Muerto might be included by Unesco in the World Heritage Sites list, it seems reasonable to follow up this intent, as it means that the Peruvian authorities have to act accordingly.

One of the actions should be to employ a guardian and install a visitor centre which naturally would draw a significant number of tourists.

Of course, this would have to go hand in hand with an education campaign among the local population.