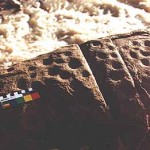 While some direct rock art dating methods are facing significant challenges, one of them, the microerosion method, is going from strength to strength.

During 1997 I participated in three separate expeditions to petroglyph sites in various parts of central Bolivia, a region whose rock art I have studied since 1987. During this field work I managed to secure reliable age estimations from several petroglyph sites. These results are the first direct rock art dating estimates so far produced in South America. The Bolivian results are fully consistent with archaeological predictions. 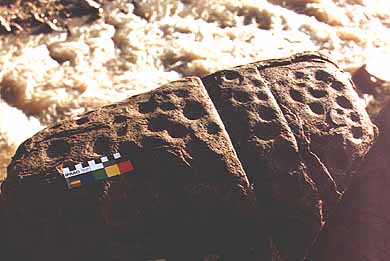 Cupules on quartzite dyke at Inca Huasi, with Uyuchama River seen below. Age not determined, but most probably of the early Holocene

In particular, some of these results were secured in totally ‘blind tests’, in which the analyst was advised only subsequent to stating his results that there was alternative age evidence available.

At Lakatambo 2, the microerosion-based age estimate of a cupule was E700 ± 150 years, and after this was announced to an accompanying archaeologist, Roy Querejazu Lewis (President of SIARB), he reported that the large occupation site on which the petroglyphs occurred dated from roughly A.D. 1200.

At the impressive Inca Huasi site, three distinctive types of rock markings occur: large shallow, dish-shaped grinding surfaces on near-horizontal rock panels, simple geometric motifs and geometrically arranged cupules on sloping rock, and randomly distributed, deeply weathered cupules on a very hard quartzite dyke near where a river has broken through it. I made a detailed microscopic survey of them and found that the ground surfaces were the most recent, the quartzite cupules the oldest. Being unable to obtain reliable microerosion data from the two older forms of evidence, I determined the relative weathering degree and then focused on extracting a reasonably solid age estimate from the recent ground dishes.

In the absence of a calibration curve for the region I had to resort to using the Grosio (Italy) curve, which also falls within the Lake Onega (Russia) calibration range. Accordingly, and in full appreciation of the qualifications that apply to such substitution, I was able to say that one particular polished surface analysed at Inca Huasi would be E1028 ± 300 years old if we accepted the Grosio calibration values as relevant. The other, similarly ground surfaces nearby all seemed to be of a similar age, while the recent petroglyphs were pronounced to be in the order of two to three times as old. This would effectively make them between 1500 and 4000 years old. The age of the older quartzite cupules is impossible to estimate, except to say that they are significantly older, probably of the early Holocene. These estimates were found to coincide with the archaeology of the adjacent occupation site and other, nearby evidence, which suggests intensive human presence from three periods: a culture with rich ceramic finds and agriculture around 1000 years ago, an earlier culture lacking a pottery tradition, and before that a Palaeoindian presence.

As in the rest of South America, reliable information about the antiquity of pre-Historic Bolivian rock art has remained elusive until now. We are better informed about recent rock art corpora of Bolivia, i.e. of the Colonial and Republican Periods. But for the time before the Spanish conquest, beginning in 1532, clues for the age of all Bolivian rock art have until now been limited to speculation. On a previous research visit of Bolivia, I examined the then newly discovered site Cabracancha and attempted an approximate age estimate of its petroglyphs, using purely geomorphological criteria. This led to an age estimate of 500-1000 years BP. The petroglyphs at this small site are dominated by a distinctive ‘trident’ design which is prominently found on ceramic remains in Bolivia. Such remains were subsequently excavated in a stratified context at Comacho Tunal Mayu, where they occurred together with charcoal providing a radiocarbon date of 560 ± 70 year BP in 1996. This seems to confirm the estimate derived from ‘direct’ indices, increasing our confidence in the validity of such analytical approaches.

At the sites Toro Muerto, Kalatrancani 1 and Kalatrancani 3 it proved impossible to secure reliable microerosion data from the petroglyphs themselves. So I collected discarded and worn stone tools that had been clearly used in the production of petroglyphs and analysed them instead. The tools from Toro Muerto prove conclusively that the site was used over a long period of time, up to about 4000 BP, and this result agrees completely with an independent estimate by Dr Alan Watchman, arrived at through examination of accretionary deposits. The rock art of the other two sites, however, is much more recent, and was made just before the arrival of the Spanish.