The conclusion of the rock art survey (part *) 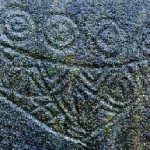 Santa Catarina Island shows sandy beaches separated by rock tongues and dikes of diabase, where the petroglyphs occur. There are several smaller islands by the external line, which points to the Atlantic Ocean, and some of them have habitation and rock art sites.

It is situated in the South Brazilian littoral, in the State which has the same name. The geographic localisation is 27º22’49’’ of south latitude and 48º21’05’’of west longitude. His extension is 55km and it has an 18km in his larger width.

This survey is the result of a 4 years research developed without any kind of financial support. It was presented to the Federal University of Santa Catarina as a History course conclusion thesis.

To understand better the context in which the rock art was inserted, uprising all the available bibliographic material concerning the prehistoric populations of the area. There is not a lot of material published about this subject, and neither studies made in this region, what turns difficult the contextualization of Santa Catarina Island prehistory.

When we talk about hunters and collectors, there are fortunately the João Alfredo Rohr’s researches made in the archaeological sites of Pântano do Sul (1977), Armação do Sul, Praia Grande (1962), Rio Tavares and Ressacada (1959); there is also the research made by Anamaria Beck in Ponta das Almas sambaqui (1972).

Concerning itararé tradition, there are Praia da Tapera and Base Aérea sites (1958) dug by Rhor; and Rio Lessa site dug by Beck (1972). 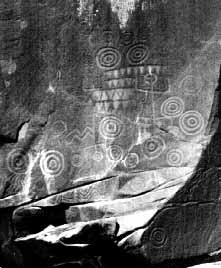 Related to guarani tradition, there is only the excavation made by Walter Piazza (1965), in the archaeological site of Rio Tavares; the rest is just superficial samplings.

This is the oldest tradition we have vestiges from in this region, and the first signs of occupation (until now) are dating from 4 500 BP (Rohr,1977). They were the sambaquis builders (TRACCE IV), this is the reason why we sometimes call them sambaquianos.

They were pre-ceramist individuals and practised body painting, following archaeological evidences found on burial bones (Rohr, 1962), usually red paintings. Those burials could be flexed, semiflexed or extended, and contained often funeral objects as axes, pebble, necklaces made on bones or vertebrae, arrows, and other kinds (Rohr, 1958; Schmitz, 1992). 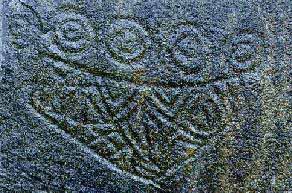 Many of these archaeological sites were completely devastated by the whitewash industry, which used to get raw material from the shells of the sambaquis.

They were ceramists who practised hunting and collecting and were possibly horticulturists too. Their ceramic were rudimentary having no ornaments and the colour goes from dark brown to black, with an exclusively utilitarian character, used on preparation and consume of the food.

Only two sites were dated: Praia da Tapera (800 BP) and Base Aérea (1140 BP). They usually chose the beach sand plains to build up their villages, but sometimes they also reoccupied the sambaquis of hunters and gatherers.

As well as the hunter and gatherers, the itararé also practised body painting, evidenced by the presence of red painting on burial skeletons (Beck, 1972). Those burials are often disposed in semicircles or circle segments suggesting the use of domiciliary cemeteries (Silva, 1988).

They are the Indians who had the largest contact with the European colonisers.

On Santa Catarina Island they were known as carijó. They cultivated the “mandioca” and the “cará”, exploiting also hunting, fishing and collecting resources.

The ceramic played an important role in the guarani communities, being used in preparation and stocking of food, as well as in ritual aims in which the igaçabas (funeral urns) were the most important ones. The most used ornaments are the corrugated, the fingernail punctuate and the painted. Schmitz believes that painted ceramics were used in noblest finalities than the corrugated ones. The ethnical historical evidences show that the guarani practised the body painting too (Metraux, 1948).

With the white men arrival, the carijó as well as the most part of the Santa Catarina State and Brazilian Indians walked to their extinction.

The rock art of Santa Catarina Island and adjacent areas was never deeply studied, and the goal of this inedited study was to find and catalogue all the symbols found during the fieldwork in this region.

From North to South of Brazil, there are a lot of rock art sites, usually with many particularities from one region to another, resulting very often in stiles which are totally opposites.

In the case of Santa Catarina Island and adjacent areas, petroglyphs are exclusively what we have and there are no rock paintings. The petroglyphs were made by polishing or pecking, and sometimes both of two techniques can be observed , indicating that in some cases the engraving was previously prepared by pecking and then accomplished by polishing. Those pecking were obtained by percussion and the polishing by abrasion of a stone implement over the support rock (always diabase).

To catalogue the rock art were used photographs, tracings – with the method utilised by Footsteps of Man (Arcà & Fossati,1997) – croquis and field files as registration technique.

(to be continued in next TRACCE issue)