Rock Art in the Himalayas 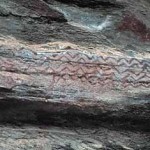 The Himalayas are the highest land formations on our globe. Traditionally they are identified as the embodiment of God, and therefore, are allowed with a divine aura. The Indian mysticism and spirituality are largely associated with these awe-inspiring glittering lofty masses.

The Indian mountains including the Himalayas are perhaps the only place on the earth where caves and rockshelters are still being used by the God-seekers or spiritual aspirants. Although geologically the Himalayas are of “recent” origin, they bear fossil remains of late Miocene, Pliocene and early Pleistocene fauna and also the earliest hominids like the Ramapithecus. 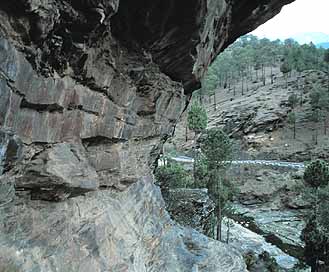 Due to lack of proper paleontological and archaeological investigations, we do not know how much about prehistoric treasures that the Himalayas hide, yet we have sufficient evidences to prove that the Stone Age man had been living in this part of the world. Besides the lower palaeoliths from the Nepal and Indian Sivaliks and middle palaeoliths from the Kashmir region we have at least 68 known rock art sites from the Uttarakhand region (the Indian Himalayas between Nepal and Himachal state of North India). Rock engravings have also been found in Gilgit, Kargil and Laddakh region of Kashmir.

In Uttarakhand the main concentration of rock art is found in the source region of the Suyal, a tributary to river Koshi in Almora district. At 12 sites there are either paintings or faded impressions of pigments on the rocks, and at the remaining sites, rock art is noticed in the form of engravings, arrangements of dots and cup-marks. The main subject of paintings seems to be group-dance. The dancers in long rows hold hands together and wear long aprons and heavy headgears. There are non hunting scenes as such. Sometimes mean and women are shown goading goat-like animals without holding any weapons in their hands. The figures are micropgraphic and painted in light red, brick red, crimson, white and blackish-green. Among animals ox, goat and fox are mainly painted. There are designs made up of wavy lines, cross-lines and finger-tip-dots. A few inscriptions in the Gupta Brahmi and Sankha script are also found. 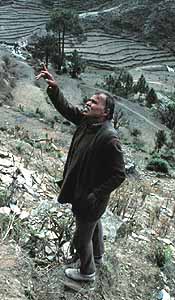 Among the engraved drawings trident, swastika, plant-motifs, snakes, arrangements of dots and deep cup-marks are noteworthy. Besides, there are underground circular caves, rectangular trenches, long rows of cylindrical pits, giant monoliths with cup-marks and a live tradition of dolmens known as the “pitarkuri” – the ancestral house. The art of Uttarakhand can be associated with the Megalithic people whose stone-cists are found in the river valleys in abundance. Thus the antiquity of the art in Uttarakhand can be assigned to some 3000 years before present.