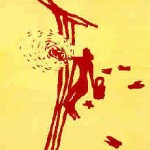 TRACCE no. 10 – by Giacomo Omallini 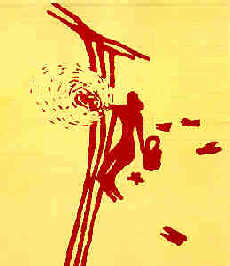 A human figure, the so-called ‘Man of Bicorp’ is near a cavity where there is the chest of bees. Hanging on three lianes he is picking up honeycombs, while near we can find some stylized bees.

For the bad condition of maintenance has been launched an international campaign for the rescue and the inscription in the world-wide patrimony.

This painting has been disfigured by vandal visitors and needs an urgent intervention of rescue.

Mr. And Mrs. Lucien and Marie-Madeleine Adam, beekeepers in Serdynia (France) and Mr. Florencio Chicote, President of the provincial Association of beekeepers of Burgos (Spain) became promoters of a collections of signatures deposited by the seat of the Unesco in Paris.

Apicoltura on line supplies this address and the email of the Unesco to send messages.
The UNESCO World Heritage Centre 7, place de Fontenoy, 75352 Paris 07 SP France.

! Propagandize this iniziative by the sites of the Rock-Art