Rock and Roll with the Camunnians 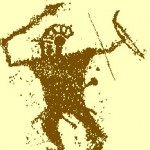 A lot of weapons!

TRACCE no. 10 – by Fieldwork participants

Rock and Roll with the Camunnians. Did they have ladders in the prehistory?
The slopes beneath the Village of Paspardo are steep, very steep. Far below is the River Re, and high up are the ruins of a mediaeval castle…

When we enter the woods, the rushing of the two waterfalls can be heard. This is the sound that accompanies our work.

To reach the site is a perilous journey. Slippery slopes, loose rocks, mean it is necessary to try and grab hold of tree branches for support, but you have to watch, some of the branches belong to blackberry thickets. The wood is mainly chestnut trees and they have very prickly seed cases, so putting your hand down to steady yourself can be a painful experience.

A new discovery: the tallest engraved warrior in Valcamonica, over 140 cm (Iron age)

We overcome all the obstacles in order to uncover rocks that carry fascinating rock engravings.

Discovering the rock engravings needs a trained eye and a lot of sunlight. A mirror can be a great help - it reflects the sunlight and created a grazing light which highlights the engravings.

Once we have discovered new engravings, the problems are not over. The engraved rocks are huge and even more steep then the slopes we walk on. Their surface is smooth, polished by the glaciers and that is exactly why they were chosen by our ancestors. The surface becomes even more slippery after a day of rain, which is quite common here in this part of the Italian Alps.

A sumer 97 fieldwork new discovery: inscription in North-etruscan alphabet(Iron age); we can read -Ueluekaizmeu-, but we can’t translate it

Here we are with our plastic sheets trying to trace all the engravings on these steep rocks. How do we trace the figures high up in the middle? How do we reach them without rolling down the rock? We experienced lots of difficulties, and it gives rise to the question: How did the people manage to engrave on these steep rocks?

Did they have ladders….?

The figures appearing on the rocks that we brought to light over the last few days represent a vast gamut of women in prayer, men in a fighting mood, animals and a footprint.

Part of the carvings show fighters with more or less harsh dispositions. They carry shields, spears, or swords. It is assumed that the size depends on the social status of the fighter. Some appear as featherweights and others as heavyweights.

Unfortunately, some figures lost some anatomical parts along the way. They appear in fact as incomplete anthropomorphs: some have missing arms, some missing legs and some even are missing their heads. This is largely true of animals, especially if edible. Horses, dogs and deer prevail.There are three ages represented: the Bronze Age, the Copper Age and the Iron Age. These figures have been carved on rocks with the hammering technique that consists of pecking directly or indirectly on the rock with a quartz or flint stone.The following are our final impressions.