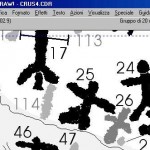 Digital auto-tracing in Rock Art Recording. Applications of computer vectorial design.
In the same way that we need to have a good reproduction of the scenes depicted or embossed in vases, we have the necessity of recognising perfectly all the figures engraved on a rock surface… 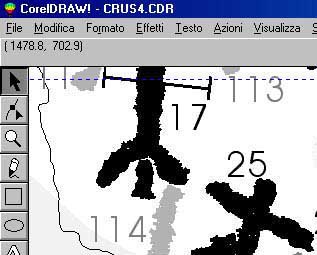 In the same way that we need to have a good reproduction of the scenes depicted or embossed in vases (fig. 1), we have the necessity of recognising perfectly all the figures engraved on a rock surface. In most cases the engraved figures are very faint, and often superimposed one each other (fig. 2-3). The complete recognition of all the figures and of all the superimpositions is the basis for a correct rock art recording , it means the basis for a correct “rupestrian archaeology”. 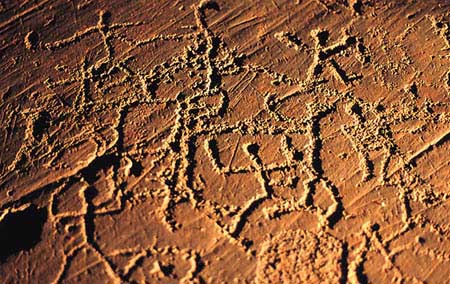 Figure 3 – Superimposed figures on the Big Rock of Paspardo, Valcamonica

Obviously the most important thing is the experience of the rupestrian archaeologist, who is able to recognise the figures related to the particular rock art culture he is studying and is able to look attentively at each superimposition, recognising the underpositioned and over positioned figures, which can deliver data exactly like an archaeological stratigraphy.

Relating to these necessities the best method is the manual tracing. In Valcamonica, which is probably the richest Alpine and European open air rock art pole, it has been developed and improved in more than 30 years of research. Tracing is done by transparency (figg. 4-5) with the plastic sheets in direct contact with the engraved surface. The direct contact with the rock surface and the manual operating are by far the best way to recognise figures on the engraved surfaces. 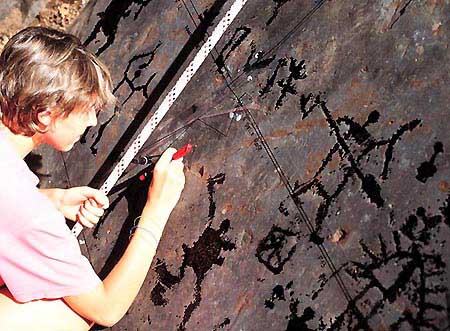 Figure 4 – Tracing on the Big Rock of Paspardo, Valcamonica, summer 1998 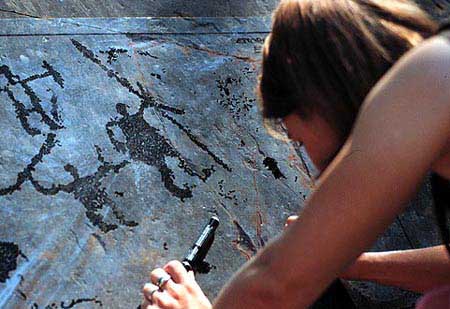 Figure 5 – Tracing on the Big Rock of Paspardo, Valcamonica, summer 1998

Assuming a correct way of operating, we obtain a series of traced plastic sheets (standard dimension are 60 x 80 cm, fig. 6), which composition deliver like a puzzle the entire engraved surface. The figures have been reproduced as bidimensional and not coloured, only black. As it is not possible to manage the tracings in the original (1:1) dimension, there is the need to reduce them to a suitable scale. 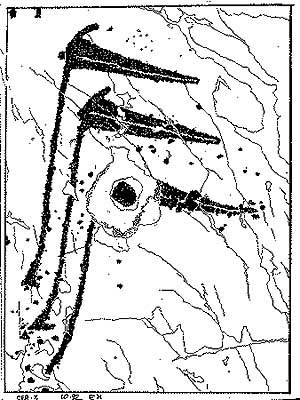 Each sheet is reduced by photography or photocopy, and joined with the others to obtain the complete surface. This work is normally done by manual cutting and gluing. Here for example a sector of the Rupe Magna in Valtellina (fig. 7), which surface contain 5454 figures in 85 sectors. For this work Footsteps of Man traced in 5 year 780 plastic sheets, then reduced, manually recomposed and integrally published in the final book. 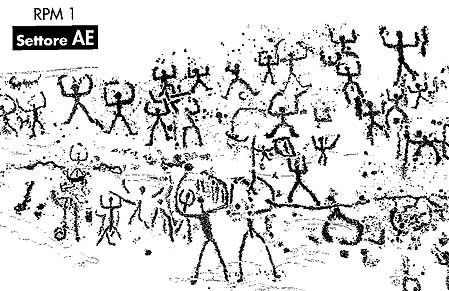 Another way to accomplish this work is given by the graphic software, scanning and auto-tracing the reduced sheets. 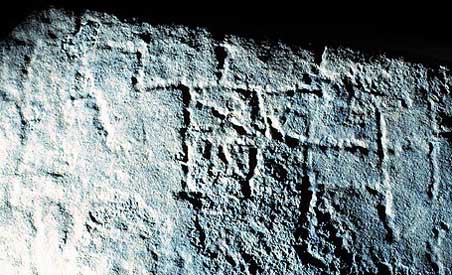 Figure 8 – The CEN-CRL2 rock (Valcenischia, I) in a grazing light picture 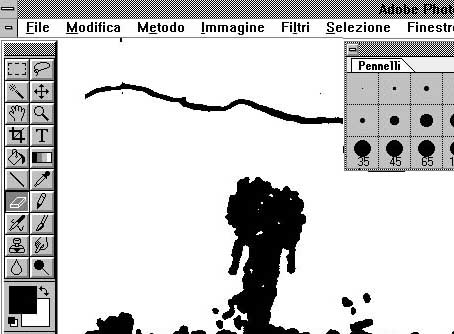 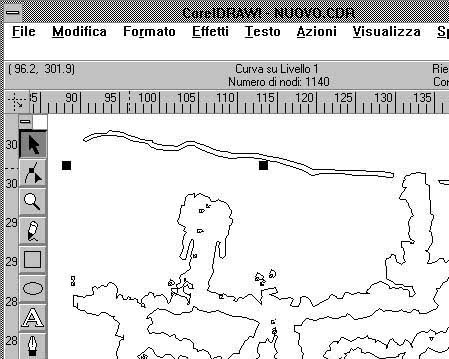 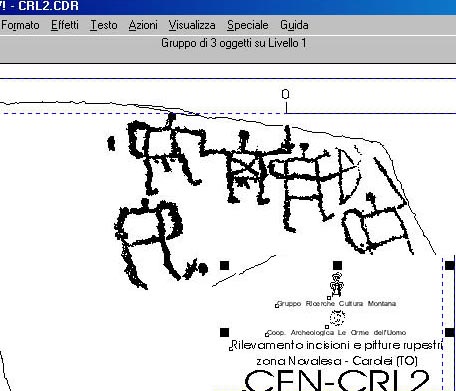 In this way there is the possibility of best managing the tracing. Here are some of the most important features. 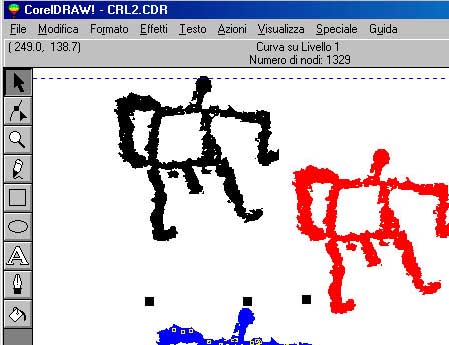 Many of these results can be obtained also by working on pictures files by imaging software. But all the previously cited features are surely better managed by working with vectorial designs.

Figurative engravings. A complete “auto tracing” has been experienced for the Pera dij Cros (the rock of the crosses) and for some rocks in the Susa Valley, both in Italian western Alps. Direct contact tracings have been made by the archaeologists of the Footsteps of Man archaeological co-operative. The work has been conducted under the enchargment of the Piedmont Archaeological Superintendence.

In the Pera dij Cros case 22 sheets has been reduced, scanned, auto traced and composed in Corel Draw (fig. 13). In this way it has been possible to add the sections of the engravings, to colour in grey the part of the surface which was underground before the discovering of the rock in the ‘70s, to underline by different grey tonalities the different kinds of engravings (human figures and crosses). The final digital tracing has been stored in 2 versions, adding in one of them the cataloguing number of each figure. 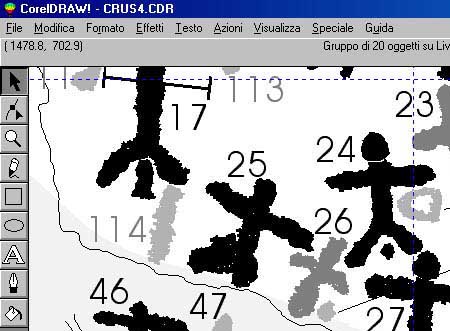 The same work has been experienced in the Mompantero (fig. 14) and in the Novalesa areas, both in the Susa Valley, where 18 rocks has been digitally auto-traced. Also in this case different kinds of engravings has been outlined by different grey scales. 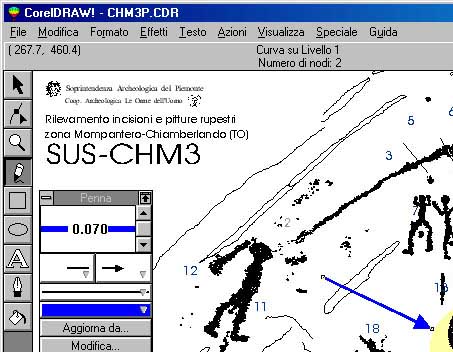 Cup-marks. In the Albedosa valley (I), again by enchargment of Piedmont Archaeological Superintendence, ten rocks have been auto-traced. It is a different kind of rock art, with only cup-marks (fig. 15). There is no evidence of pecking, so only each cup-mark or groove border is to be traced. In this case deepness has been marked with level curves (one each cm), darkened with progressive grey tonalities. 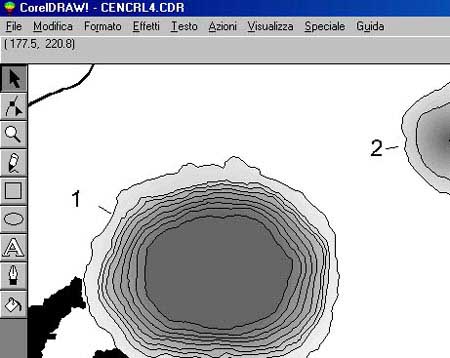 Paintings. The same method (manual tracing and computer vectorial rendition) has been applied to the Cavour (I) open air paintings (fig. 16-17). The different layers of superimpositions and of colours have been translated in different tonalities (fig. 18). In this case the manual tracing has been done with the help of a PhotoShop enhanced picture (fig. 17), where the colours had been previously changed and pushed to an artificial contrast by a tonality substitution. This method is obviously more successfull when the painting colour is different from the base rock colour. On the contrary if a red painting has been executed over a reddish surface the picture manipulation and the colour separation and/or substitution will be clearly not so successful. It is to be pointed anyway that “authomatic” colour or brightness manipulations are very rarely completely objective: each passage could cause the loss of some detail, each different filter could result in a slightly different shape of the painted figure. My personal opinion is that even in this case we can’t abandon the manual tracing, thus adding a fundamental photographic control with natural and enhanced pictures or, better, doing a double work and comparing the different results. 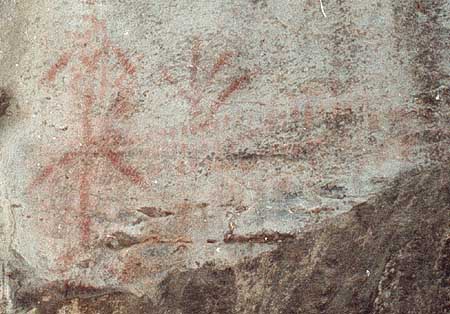 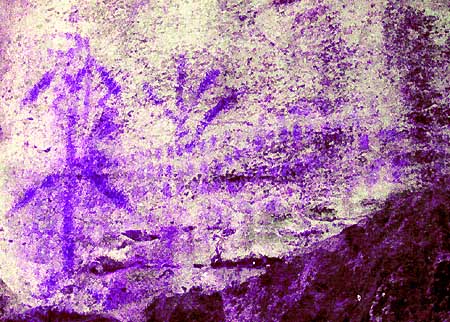 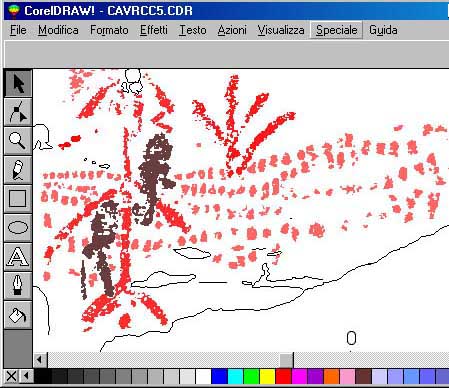 In conclusion the digital auto tracing method reveals to be a powerful tool in Rock Art recording. It is more appropriate in case of not heavily filled and superimposed engraved surfaces, where the work of the digital cleaning is particularly long, anyway possible. Its archaeological and scientific accuracy depend obviously by the quality of the manual tracing, while its software management qualities are undoubtful. The software – hardware evolution will certainly offer in the immediate future new improvements in this particular field of the Rock Art research.