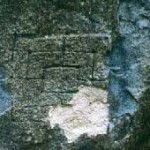 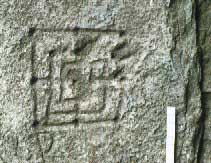 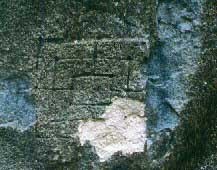 In this essay I want to introduce all depictions of nine men’s morrises which have been discovered until today and collected in the archive of the ANISA society (1).

In the eastern Alps until now more than 35.000 petroglyphs are known and only 33 of them are depictions of morrises, nevertheless they could be find in all regions. But the regions of Lofer and Golling with about 11.000 known petroglyphs also contain the most morrises.

Most of the depictions consist of three concentric squares, but sometimes they are also drawn with four or five squares. The smallest one is 3,5 cm long, the largest 50 cm. On the average their length is 15 cm.

The depictions of morrises are mostly located on lonesome and hidden places, which can not easily be reached like steep slippery slopes and woods. The are scratched on fallen stones, rock panels, rock clefts, shelters and entrances of caves which have in common a talcic weathering stratum which can easily be treated.

The nine men’s morris was a popular game. The very difficult question of the meaning and dating of the depictions of morrises should also be discussed in this contribution. At the beginning I want to give a survey of the different approaches and meanings in the literature (2). 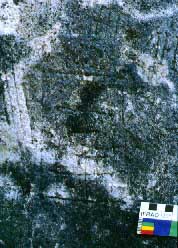 Comments on interpretations of morris boards

Fantasy, the incomprehensible, the cultic sphere are dangerous barriers for a realistic interpretation of rock art by men. It may lead crazy notions lasting a life time. Oftentheinterpretations tell us more about the interpreter than about the object interpreted (1, Mandl-Neumann). Don’tconstruct anything complicated, supernatural and romantic,

but look for interpretations which are as simple as possible. The creators of the rock engravings were usually simple, uneducated people who were able to drew what they had seen and what they had dealt with.

Of course with simple and uneducated men we have to take into account cultic and magic actions. They were living in a world which they tried to explain by analogies. What does cult mean for the visitor of the Holy Mass on Sunday? Are we aware of the cultic act of the priest when he sacrifices in a sacred room in our presence, when he blesses us (3)? What about pilgrimages (4)? Why is the horseshoe (opening to the top) mounted on some cars? What the talisman, the symbol of luck on the chain? Are these objects not also carriers of luck to have magic influence (5)? Greeting people lifting the hat, shaking hands, spitting three times in front of a black cat were originally doubtlessly luck-bringing magic actions. Are we still aware of that? Such questions demonstrate that magic and cult are common things today. But we should not attempt to construct essential cultic activities of shamans or sorcerers from these everyday matters. The magic practices around us are part of our everyday life and are of no great importance. They only become important if they lose their everyday quality. And that is what we seem to believe about rock engravings. Signs on the rocks look very old and therefore the are often connected with cultic activities and magic elements. At a closer look at the frequently shown symbols like the pentagramme, the Jesus-monogramme, the cross symbol, the sex symbol we get simple and profane results which show that they were symbols of everyday life, symbols which were supposed to bring luck, which were used against fear, which had apotropaic aims.

In his book about in medieval Hungary Sándor Pétenyi wrote that the nine men’s morris, with its simple rules was popular with the nobility, but also among common people. Being apopular game in ancient times it was still played in medieval times. He believes that the Hungariens brought it from the East during their migration. They had contact with the Arabs with Byzantium and with the Vikings. Ofcourse the neighbours of the Hungarians were confronted with the game somewhat later (6). Morrises engraved on stones and bricks are assigned to High Middle Ages and Late Middle Ages from the peninsula of Istria very likely date from the Middle Ages (7) Similarly the depiction of morrises in the cloister of the cathedral in Brixen, South-Tyrol can be assigned to the High and Late Middle Ages too. For the depictions of morris boards, which after Biedermann could represent an old world view scheme(8), the symbolism for everyday life has to be considered first. Here we think of the game first. A depiction on a vertical wall cannot be used for playing a game! The pins would fall down. If it is not a game, is the only alternative a cultic meaning?

And can the depictions in the northern Kalkalpen with four or five concentric squares still be called morris boards, while the so-called morris with three pins cannot be the target as there are four or five crossings on the axes? Aren’t these already unlovable mysteries?

First one should consider whether the nine men’s morris was a popular pastime of the people of the High and late Middle Ages and the early modern times. This strategic and not very difficult game was easy to prepare. All you needed were a plane area on which you could draw the squares and the crossing lines. Anybody could do it anywhere. If the game was commonly known, also its structure was known. Now, if various kinds of rock engravings were drawn, e.g. also of houses and crossbows (9), why should not pictures of morris boards be drawn too? One cannot live in an engraved house and one cannot shoot with an engraved crossbow and one cannot play “nine men’s morris” with an engraved morris board. Nevertheless the house is a house, the crossbow is a crossbow; why should the morris board not symbolise the board for the game or be a picture of the board?

Other aspects may be good luck in a game and the happiness to be able to play a game. It may not have been unimportant that this strategic game sometimes brought luck to an untrained man. This fortune may have been transposed into the transcendental and may have made the morris board a luck symbol. Perhaps playing the game at home was forbidden because it meant a waste of time and money. It may be possible that the game was therefore played in the open air and the engravings were made in defiance. Perhaps it was the intention to show others that one remained calm in a lonely, frightening place and spent one’s time symbolically by engraving a morris board?

If the inhospitable surrounding of most places with morris depictions is taken into account the morrises could be either taken as a symbol for fending-off magic against demonic powers or as a symbol for escaping from an obscure, partly dangerously steep area. This strategic symbolic content of the complex depiction could then have been taken into account and symbolise a perhaps forgotten but subconsciously known cosmic world order in this case expressed in an apotropaic imaginative desire. Was it then perhaps a symbol of order and law for common use?

The structure of the concentric squares and the geometric arrangement may let us think of a system of order. In that case the depiction of morrises would be a hint to the law and order of daily life, of the cultural and moral environment.

Summing up it may be said that a multitude of interpretations is possible: it might be an apotropaic luck-giving symbol, protecting people against danger, as the complex I was-here-sign representing a personal mark, as a sign used as a hint (e.g. a symbol for order) for other people. All these interpretations have more or less strong magic relations.

Nevertheless one cannot assume that the morris-like ideal plan of ancient cities, which was understood as the symbol of cosmic order, was known to the uneducated rural people of the Middle Ages. It is more appropriate to relate the depictions of morrises on vertical rocks to the subconscious and conscious magic practices of the everyday culture of the High and late Middle Ages. 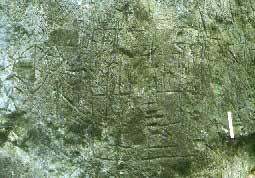 The engravings are found on limestone (Dachsteinkalk) whose weathered surface could be easily engraved.

This kind of surface is formed on wet parts of walls, they decay more or less rapidly on the surface and steadily grow by chemical reaction at the basis. The thickness of the weathered layer depends or the intensity of weathering and has, subject to its position after some time the same thickness. The thickness of the weathering layer is also relevant for the age of the rock engravings. Thin layers are young and do not have ancient engravings. Thick layers are older and may have older rock engravings.

At some of the engravings described in this article the moss was not removed for this reason.

Acid rain might show first signs of damage: bright solution-troughs on the limestone of a few mm to 1 cm in size. These bright spots can be observed more and more frequently and a scientific study is desirable.

Up till now one could notice that the weathering of the surfaces including the rock engravings progresses relatively rapidly. This is obvious from the engraved years dating from the 16th and 17th century which show strong indications of weathering. It leads to the conclusion that most of the engravings cannot be very old and date from Modern Times. The depictions of morrises fall under these criteria too and, as a rule, they show strong weathering as well. Only in protected positions they are still well preserved. Such favourable localities are, however, rare. If we compare the weathering of morris depictions with the weathering of crossbows dating from the late Middle Ages and early Modern Times, a relative coexistence can be postulated. Therefore the morris depiction can be attributed to the late Middle Ages, or more precisely: They were engraved with high probability between the 13th and 16th centuries. Occasional results are possible where morrises are found next to engraved years from 16th, 17th, 18th and early 19th centuries which allow a correlation on the basis of grove weathering.