The conclusion of the rock art survey (part **) 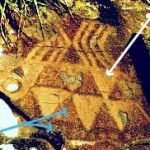 The conclusion of the rock art survey (part **) in Santa Catarina Island and adjacent islands – Brazil.
The petroglyphs suffer constant aggressions, from walking over the engravings, mark the petroglyphs with a piece of rock, painting made with oil paint… . 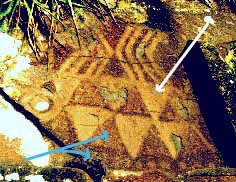 The petroglyphs suffer constant aggressions, from walking over the engravings, mark the petroglyphs with a piece of rock, painting made with oil paint; to explode rocky walls full of petroglyphs looking for treasures (Rohr 1969) – many treasure hunters believe that the petroglyphs are indication signs made by pirates.

The survey resulted in the cataloguing of 564 engravings, grouped in 32 sites from 14 locations. Of these 564 engravings, two are from Joaquina Beach and Armação do Sul Beach, which are extinguished sites and their petroglyphs are in the Homem do Sambaqui Museum. 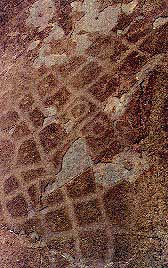 “Net-like” formation. Dots and circles inside the meches can’t be represent the caught fishes.

There is not a distribution pattern, the petroglyphs are sometimes in horizontal blocks and sometimes in vertical blocks.

All of them were found in external littoral coast, exempting the Caminho dos Reis site, one track uniting Galheta Beach to Barra da Lagoa community.

Curiously, we have knowledge that inscriptions with thin engraved lines (1 to 1,8 cm) frequently show a greater consuming than the others of breadth engraved line (with more of 2 cm). The deepest engrave was 8 mm, but the majority had about 1 mm. The engraved area has a variation of petroglyphs with 10 x 10 cm to panels with more than 5 m of length, covered by symbols.

Sometimes we found them on the ground of Rock-shelter, or in plateau higher than 8 m. Why some of them were practically hidden as long as others could be seen of the sea when the island was coasted? That’s is a question remaining without an answer.

The circle is the predominant element, totaling 218 engraves; followed by a variation of waved lines and zigzags, with 62 engraves; and after this the variations in obtuse angle, with 41 engraves.

Petroglyph from an extinguished site of Joaquina Beach. Example of variation in obtuse angle

There are also the triangle in series and anthropomorphic representations as figures with a lower rate of appearance, but present in several sites.

There are no data proving clearly a diachronism followed by stylistic systematic differentiation. Few superimpositions were found to be analyzed.

Apparently they all belong to the same style (geometric abstract), exempting the petroglyphs from second site of Galheta Beach, which are composed by unregular lines of free form.

The stylistic perception applied on the petroglyphs goes from simple pecked motives, without a major care, to others with fine final touch in two polishing levels. 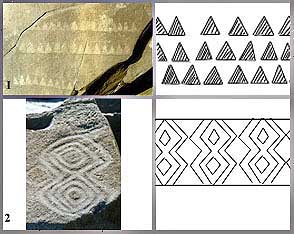 Similarity among petroglyphs and cultural elements of 3 traditions

Until now it is impossible to asseverate which culture (or cultures) is responsible for this rupestrian manifestation. If cultural elements of the 3 traditions are analyzed (hunters and collectors, itararé, guarani), it is possible to realize that any of these could be responsible for the confection of the petroglyphs.

The body painting is present in all 3 traditions. The hunters and collectors possess whalebones engraved showing geometrical motives (however found in sambaquis of Laguna city, sited in south of the Santa Catarina State). Some elements which are present in itararé tradition also suggest similarities, as for example the circular habitation and fusiform adorns. Despite being the less studied, the guarani (carijó) tradition is the one that presents the most propitious evidence to a comparative analysis: the painted pottery, were some elements show a large similarity with the ones represented in the petroglyphs.

Because of the very few data about this 3 traditions it becomes risky to interpret such symbols. Maybe more studies in this area could bring to light more appropriate elements in trying to interpret the symbols and relationship between traditions and petroglyphs.

If we risk some inference, we cant correlate some elements to fishery. The “net-like” formations can be associated to net used in fishing and some circles and dots appearing inside the meshes can represent the caught fishes. The dot series can be related to some kind of counting, maybe phases of the moon, which are references to fishing periods.

I hope the data contained in this research to be useful for future deeper researches and maybe to find out who were the authors of the Santa Catarina Island petroglyphs and what message they possibly could be transmitting us through times.

My sincere acknowledgements to people who contributes in an important way to the realisation of this research: