Pattern and Function at Jeffers Petroglyphs 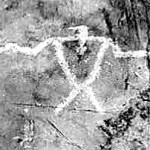 TRACCE no. 9 – by Robert Alan Clouse 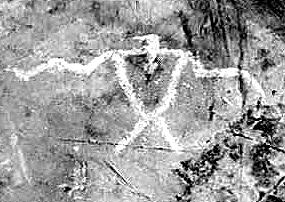 The Jeffers Petroglyphs site in the Midwestern United States contains over 2,000 recorded carvings, some of which likely date to5,000 B.P. The nearly horizontal surface of the quartzite outcrop retains ripples and mud cracks as evidence of its shoreline formation 1.6 billion years ago and striations resulting from the last glacial advance some 14,000 years ago. Sitting atop a high ridge in a virgin prairie in the Couteau des Prairies, the site is on the watershed divide between the Mississippi and Missouri River basins near the eastern periphery of the Great Plains.

Largely descriptive in nature, the 1970s initial detailed research documented glyphs representing animals important for subsistence, a variety of humanoid forms, weapons (including the atlatl), and abstract forms. The absence of such forms as firearms and the horse and other images frequently associated with the late prehistoric period suggests that the carvings clearly predate European contact with American Indians in this region.

Recent analysis documents spatial patterning which reflects the episodic nature of the creation and use of the site. The use of Correspondence Analysis as an analytical method clearly depicts relationships between glyphs and glyph clusters that are partly explicable within the cosmology of various American Indian Plains tribes. Ethnographic data recorded among the Cheyenne, Dakota, Hidatsa and others by explorers, naturalists, and anthropologists contain a wealth of information useful in understanding the meaning of many of the glyphs. Particularly useful are American Indian authored ledger drawings that allow for interpretation of certain elements of the site in a historically recorded context. The cosmology associated with creation myths provides another interpretive framework within which to understand relationships between the site and its landscape setting. 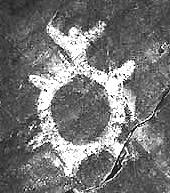