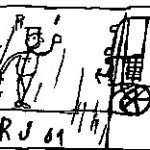 TRACCE no. 9 – by Katalin Ernyey

2nd International Congress of Rupestrian Archaeology
2-5 October 1997 DARFO BOARIO TERME
Preliminary Report: they had been engraving bricks more than half a century…
Engraved bricks, absolutely similar to prehistoric ones, in their physical character, were found, last spring in Budapest, by the author.

Engraved bricks, absolutely similar to prehistoric ones, in their physical character, were found, last spring in Budapest, by the author. (Later I found that in 1981 they were mentioned but not analysed in a television programme made by the Budapest Association for the Protection of the City (Ráday 1988:I.64, II.125).

The engravings are situated in the heart of the inner city, on the Múzeum and Puskin street side walls of the University of Eötvös Loránd, ex department of Natural Sciences. They cover more than 4 sq metres of the yellow decorative brick (kinkier) decorated walls of the building, and their number is between 150-200.

The engravings can be grouped into four classes:

The names, numbers, drawings are related to each other in their context and enter into the big group of graffiti.

The oldest graffiti, dated by numbers is from 1884, one year after the construction of the building, the youngest is from 1929. Most of the engravings without datings (95%) can be dated by style and motif analysis between 1884-1940

The particularities of the engravings, that inspired me to present them at this congress are, that during all these 56 years, nearly all of them were made by two well-defined groups: they are engravings by pointsmen, employed by the Budapest Transport Company between 1878-1925, named BKVT, and engravings by soldiers taking part in the Soviet Revolution in 1919 in Hungary.