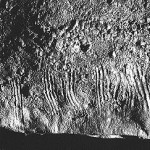 2nd International Congress of Rupestrian Archaeology
2-5 October 1997 DARFO BOARIO TERME
Bronze Age sculpted caves in the Périgord (Dordogne – France)
The Périgord has been famous since the XIX c. for its wealth of caves painted and sculpted in the Palaeolithic era…

The Périgord has been famous since the XIX c. for its wealth of caves painted and sculpted in the Palaeolithic era. Less widely appreciated, however, are the later depictions, particularly those of the age known as Protohistory.

They tend to be ignored because they are often found alongside those of the Palaeolithic age. A typical example of this association can be seen in the cave of Rouffignac (Barrière, 1974, p. 185 Chevillot, 1981 and 1990).

The recent discovery of a perfectly sealed Bronze Age cave on the private property “Les Fraux” at Saint-Martin-de-Fressengeas in the North-West part of the Dordogne has confirmed the theory that Bronze Age man in the area produced cave art, generally geometric or schematic designs. 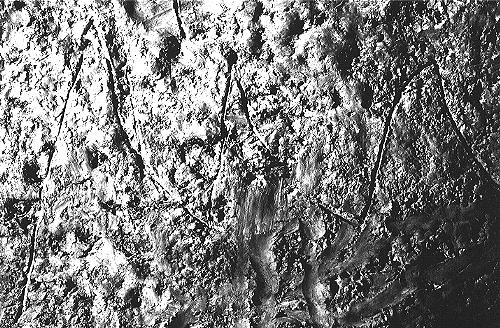 I. The Cave of Rouffignac

This exceptionally vast cave – 7km long – is mainly known for its palaeolithic paintings. But the cavity has been almost constantly inhabited to this day. The depth of the strata apparent at the mouth of the cave provides proof of its occupation during the Neolithic, Iron and Bronze Ages. Inside, various structures, particularly the sepulchres, and remains of activity within the cave, can be attributed to the Bronze Age (Barrière, 1974 – Chevillot, 1981 and 1990).

Apart from the Palaeolithic paintings, in various parts of the cave there are rock carvings and finger printing made in fresh clay corresponding in every respect to those found in the cave at Les Fraux, such as the tectiform, serpent and zigzag motifs.

It is greatly to be regretted that no study, even partial, has yet been carried out on this cave, which was discovered quite by chance in November 1989.

Of particular interest is the fact that it is the first purely Bronze Age habitat found in the Périgord, unadulterated by either Palaeolithic, Neolithic or post-Bronze Age occupation. It also contains a valuable collection of ceramic and metal ware as well as structural elements (postholes and other installations) and cave art on the walls and sometimes even the ceiling. Significantly the site was occupied during a relatively short period, from the Middle Bronze (cf. the cave Groupe des Duffaits) to the Final IIIa Bronze Age (between about 1500 and 950 BC), which means that the sculptures can be dated more accurately.

There are several hundreds of man-made depictions on the wall both isolated and in groups. Most of the art follows linear, schematic and geometric designs: parallel lines, broken lines, chevrons, zigzags, ladder shapes, etc., etched in the clayey walls. It is evident that these designs were made by various means: with metal blades, fingers, sheaves made of animal bones, etc.

We have drawn attention to these examples as we consider them to be significant in the study of the development of Bronze Age culture in Western Europe, particularly as they are not widely known.