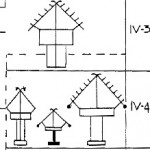 TRACCE no. 9 – by Emanuela Tognoni

The architectural figures engraved on the rocks of Valcamonica present structures of Iron Age (8th-1st cent. BC) and they can be interpreted as houses, temples or granaries. Engraved with perspective, isolated, in couple or in groups, they vary in structure and dimensions. All dwellings have three fundamental elements (fig. 1): the base, represented with three or more vertical lines or with an only mark, often has a support (plinth); the rectangle that forms the central body; the roof, with triangular section or, more frequently, pentagonal, with short vertical lines, decorative elements or supports. Sometimes, at the extremities of the roof are engraved some disks that can be interpreted as sun circles, shields, wheels with rays or simulacra, whereas on the top of the roof sometimes there are some heads of animals (horns of cows, heads of birds or horses) that, according to the popular traditions and wide-spread beliefs in the whole world, have an apothropaic value (BRUSADIN 1961-62).

The study of the rock 57 of the National Park of Rupestrian Engravings of Naquane, Capo di Ponte, and the comparisons with many other engraved rocks of Valcamonica had consented the identification of seven different types of architectural figures (fig. 2). During the constitution of this typology it has been noticed the formal and stylistic differences among the figures: the firsts refer especially to the type of the base and of the roof; the second instead concern the structures. These in the first time are simples and essential, than they become more complex either in the forms or in the decorations, and, at the end, they are careless in the execution and in the proportions, coherently with the evolution of the Camunnian rock art of the 4th period, the Iron Age. The analysis of the superimpositions among the figures of dwellings, animals and warriors, that are dated from the style or the weapons, was very important (TOGNONI 1992).

Moreover the architectural figures are frequently associated with characteristic subjects of the Iron Age and with figures that have a symbolic value as the warriors, the birds and the footprints. In this sense also the architectural figures are part of the heritage of ideas and religious beliefs that animates the Camunnian art of the 1st millennium BC.