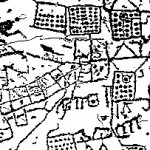 TRACCE no. 9 – by Cristina Turconi

2nd International Congress of Rupestrian Archaeology
2-5 October 1997 DARFO BOARIO TERME
The map of Bedolina in the context of the Rock Art of Valcamonica.
The work has consisted of taking tracing of the engravings, followed by a chronological analysis of the figures, based on the study of the superimposed images.

Rock 1 of Bedolina di Cemmo is situated on the right side of Capo di Ponte at the height of 300 m in a panoramic position and slightly inclined toward the bottom of the valley.

The work has consisted of taking tracing of the engravings, followed by a chronological analysis of the figures, based on the study of the superimposed images, and on my personal interpretation of the principal layout. This is composed of 36 quadrangles, filled internally by regular lines of circles, and nearly all joined together by irregular lines. The whole has the look of a topographical representation and the common interpretation, and also the most probable, is a representation of cultivated fields connected by paths, streams or irrigation canals: for this reason the rock is known by the name of “the map of Bedolina”. Armed figures, animals, huts interfere with the map and the analysis of these superimposed images has allowed the map to be dated.

The first scientific survey of the rock was made in 1960 by M. Beltran Lloris for the Centro Camuno di Studi Preistorici: the analysis of the style of the figures, the type of trace and, in second place, the analysis of the superimposed images allowed to date the map back to 1500-1400 b.C.

In the survey made in this work new figures (seven armed figures, one animal and one hut) have emerged which in the first survey hadn’t been seen. Moreover the analysis of the style and the study of the superimposed images, made according the most recent chronology of the rock art of Valcamonica, with particular reference to the Iron Age, has allowed to insert the map under the IV style, which is dated to the Iron Age.

The representation of a territory of such intensive cultivation moreover is better inserted in the cultural context of the I millennium b.C, when in all Europe there was a full confirmation of the private propriety. In particular in Valcamonica the archaeological and geological investigations, made in the middle valley, prove that in the last millennium began a movement of the dwelling and of the agriculture activities towards the lower valley. So the map could be the witness of these movements of human activities. Above all the word “map” in its modern meaning of representing cadastral territories is not a correct interpretation if referred to prehistoric representation of territories. I believe rather that this picture has abstract meanings, magical-religious, or ritualistic functions, practised to protect the territory from every type of calamity.