TRACCE no. 9 – by Congress staff

The exhibit “Forma” collects the reconstructions of experimental archaeology made by Jack Belmondo – stage name of Giuseppe Belfiore Mondoni, born in 1946 at Cerveno – considered one of the most important experimental archaeologist in Italy. In 1989 he presented some models of hut, chariot and plough during the experimental archaeology section of the congress I Camunni tra Storia e Preistoria. Between the 1989 and the 1990 he started the first melting of metals to obtain daggers, axes and swords, activity that developed in the following years, especially due to the fact that he was requested to reconstruct few weapons for important exhibits and museums in northern Italy. Unfortunately he died unexpectedly on April 24 1997, after finishing other important works – a granary of the Iron Age in the regional Park of Foppe di Nadro and some reproductions of objects found in the Roman graveyard of Borno (Valcamonica) now exposed in the town. The exhibit is planned to honour his memory with the consciousness that his work will be alive and remembered to all the people he knew or simply to all that want to approach his beautiful creations.

The exhibition resumes, through drawings and photographs, the more recent rock art findings in the Western Alps and includes the last researches and interpretations of scholars.

Result of the work of the Soprintendenza Archeologica of the Piedmont, of the Museum Civico of Cuneo and of the Cooperativa Archeologica “Le Orme dell’Uomo”, shows as the rupestrian archaeology is important in this region for the archaeological research and for the popularisation of the results obtained to the great public.

This itinerary exhibition has already been exposed in some towns of the Piedmont: now for the first time is in Valcamonica showing the beautiful rock art of the Western Alps. 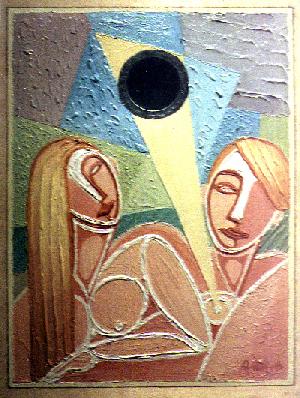 Daniela Robbiati discovered the vocation for the figure and the graphic during the study at the Art School of Busto Arsizio (VA). Since the first artistic production it is evident the use of symbols and metaphors, with a certain predilection for the line signs. Among her favourite symbols appears the circle, often surrounded by frames and other symbols inspired by the ancient world. In the recent production the artist has almost abandoned the graphic for a painting that can be defined statuesque. The new attention to the prehistoric and primitive imagery is visible in the use of materials, like glass, flints and mirrors. The exhibit “Segni” proposes a possibility of mysticism, suggested by the use of ladders and by the chromatic break that symbolise the different state of conscience. The artist favours the ambiguities and the transparencies, conscious of the parallelism and the interference in the daily life between Absolute and Reality.

Donatella Stamer exhibits recent works of art, especially realised for the Congress. She studied at the Art Academy of Lecce and took part in many exhibition in Italy and in some European countries. Now inspired by Camunnian rock art after the participation in an archaeological course in Valcamonica, she wants to conjugate the space without time through the revisit of the places, tempting the memory so that the past could suggest the new way to cover. It is the chronicle of the past that appears again in the first page through this diaristic form. The spears and the blunt instruments follow geometrical trajectories. Donatella Stamer with “L’uomo dalle braccia alzate” wants to show the human being that represents himself.

The exhibition “Visions from Himalaya” by Dr. Y. Mathpal (b. 1940 at Naula, Almora) proposes a series of water-colours which reproduces rock art figures and enchanting landscapes of the Himalayas, places pervaded by an intense spirituality. Here it is still present a living religious tradition represented by sadhus and yogies that live secluded on the top of the mountains and that are visited by pilgrims from the whole world.

Yashodhar Mathpal, director of the Museum of Folk Culture of Bhimtal, U.P., is closely associated with the rock art programme of the Indira Ghandhi National Centre for the Arts of New Delhi where are collected many of his rock art reproductions. Among is known rock art publications are Deer in Rock Art of India and Europe (edited with A. Fossati and G. Camuri), The Prehistoric Rock Paintings of Bhimbetka, and the beautiful recent
Rock Art of Kumaon Himalaya.

by Marcello Chiarenza
inauguration: h. 18.30 Saturday, 4 October 1997 Garden of the Municipality of (Darfo)

The exhibit of Marcello Chiarenza is part of the European Section of the exhibit “Deer. Early Images in the Art of India & Europe” held in New Delhi in 1993. This itinerary exhibition has already been exposed in many cities of Italy and now for the occasion of the 2nd international congress of Rupestrian Archaeology will be in Darfo Boario Terme with its wonderful arboreal statues. The Kalevala narrates about an elk constituted of arboreal materials: branches of willow, rushes, trees of marsh, bark of fir.

The figures, that are inspired by the deer symbolism, take shape from branches, pruned shrubs and from fruits. The big deer of hazel evokes the many figures of deers, conceived in transparency by the prehistoric artists. The sickle of moon stretched between the antlers tells about the sky and the ultra-terrain waters….