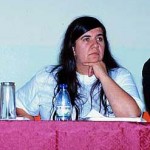 An archaeologist who campaigned to stop a dam from destroying prehistoric rock-art in Portugal’s Côa Valley is appealing against a harsh five-month jail sentence for criminal libel and defamation. 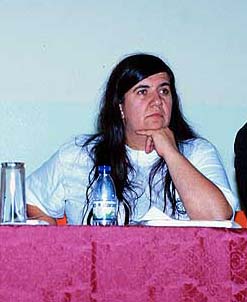 An archaeologist who campaigned to stop a dam from destroying prehistoric rock-art in Portugal’s Côa Valley is appealing against a harsh five-month jail sentence for criminal libel and defamation. The judgement of Monday, January 17th includes unprecedented damages of around US $10,000.

This ordeal was over an unsigned story that appeared in a small free fortnightly local paper dated March 1st, 1995. The reputedly unruly editor died shortly after that edition appeared, leaving a supposed interviewee in dire straits.

Mila Simões de Abreu, a mother with children aged 9 and 12, was forced to stand trial in the accuser’s distant hometown. Here a young judge and prosecutors indulged in an inquisition stretched over three months from last November to this January.

Trampling a dismissal two years ago, legal idiocy galloped roughshod over a law that placed blame on the late editor and dragged this suffering rock-art researcher and her family through yet more unforgivable anguish.

Nothing could show the story is a completely true report of some conversation, so the accuser’s allegations, normally inadmissible hearsay, guesswork and false proof became the core of the judgement against the researcher. 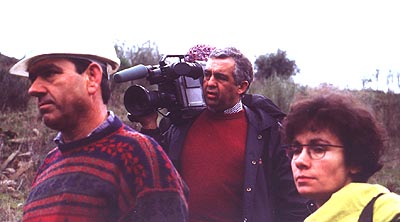 The first visit of the press at Canada do Inferno (now Côa Archaeological Park),
February 1995, during the building of the dam

Bizarre behaviour surrounds this baffling decision–last of which is the judge’s refusal to let appeal lawyers have copies of the court proceedings, which are on tape. This move is not altogether surprising because the trial was very irregular. One court official in Lisbon said there were so many anomalies that there has to be something quite powerful behind.

On the first day, the public minister (a sort of public prosecutor) said she knew the affair well because she has engineers in her family that worked on the dam. Just before the first session ended, the minister proclaimed words to the effect that it was better when Portugal was a dictatorship and there was not excessive freedom.

There were numbing scenes, like when the judge sat impassively as the public minister let slip she had interrogated a witness in the street. Later, she aloofly watched while the accuser’s lawyer hurled unrestrained slander at the scholar.

Less impassively, the judge repeatedly snapped and barked at the unhappy university teacher, who had to crouch and shiver for hours on end in a chilling draught. So low was the mistreatment and indignity, a casual onlooker might have thought some incorrigible drug trafficker was on trial.

With this mistreatment, it’s no wonder the archaeologist became ill before Christmas and could not attend court. Her lawyer certainly didn’t expect hearings to proceed without his client, so he didn’t make a long five-hour journey to the courthouse. Contrarily, the judge appointed another lawyer in his place and steamed ahead with the trial, dishing out arrest warrants for absent witnesses and a scrutiny against the doctor who provided a medical-certificate for the sick archaeologist.

This most abnormal and possibly unconstitutional trial, along with the judge’s refusal to hand over the court proceedings may be reasons for the appeal court to quash the case. Appeal lawyers are not certain if there will be a retrial. It can be two years before Mila Simões de Abreu and her family get to know whether this ordeal is over and if they can live their life in peace again.

All the trial anomalies are worrying concerns but the farcical sentence goes beyond reason and understanding–at best, it’s a confused misjudgement and, at worst, plainly evil.

It’s incomprehensible that a good country like Portugal–which strives to be accepted as a humane and caring member of the international community–should let even one of its institutions become an instrument of suppression, persecution and vengeance against any freethinking person.

Reported by Ludwig Jaffe for Companions in Solidarity:

If you want to sign this appeal please fill this form.
Your name will be added (manually) to the signatures above.
Important: NO AUTOMATIC REPLY. CLICK ONCE PLEASE.
After you click the form is sent, even if you think nothing happened. To see your signature you need to wait the editor reads the email, updates this paper, and downloads it.