Archaeology of the Côa Valley

The underlying issue, however, is that the Côa valley has become the battleground of two schools of thought: the traditional Palaeolithic art experts who insist the valley’s rock art is of the Pleistocene and about 22,000 years old, because according to them it is of a Solutrean style; and a very small number of archaeometrists who find this unlikely because of a long list of aspects of the art itself, the valley’s morphology and geology, and of the art panels generally, not to mention direct dating evidence producing identical results in three blind tests. 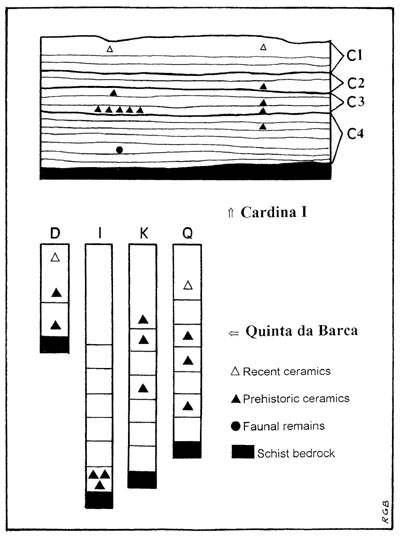 Figure 1. Top: a section of the excavation at Cardina I, showing the distribution of ceramics. Their occurrence in three of the four main strata indicates that the microliths found with them are probably Neolithic, except in the lowest quarter of the sequence, where the lithics might be Mesolithic. Bottom: Four typical sediment columns at Quinta da Barca, indicating that ceramics begin right from the basal rock, so these sediments are presumably of the second half of the Holocene. (After Aubry, Carvalho and Zilhão 1997.)

Portuguese archaeologists have set out to prove the Pleistocene age of the rock art by essentially three means: finding an animal figure depicting a species not existing in the region during the Holocene; finding petroglyphs below ground level and minimum-dating them via stratigraphy; and finding occupation evidence of the Upper Palaeolithic period, preferably the Solutrean. 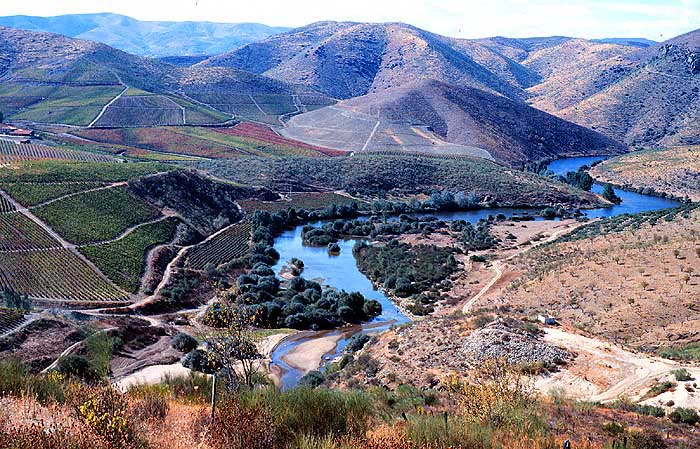 Every possible effort was made to meet at least one of these goals. A thorough search of the valley turned up more modern or historical depictions, such as crucifixion scenes, pictures of locomotives, birds, inscriptions and engraved dates, but not one image of a Pleistocene object. Every sedimentary deposit around the base of decorated cliffs was dug up, but with the exception of some figures partially concealed by very recent uppermost sand deposits, no sediment-covered petroglyphs were found in this valley with over a dozen rock art sites comprising many thousands of motifs.

Moreover, wherever occupation evidence was discovered, the sediments contained ceramics down to bedrock, which means that the lowest strata could only be Neolithic or later (2). This means that the valley’s sediments are generally mid to late Holocene deposits, which is precisely what the archaeometrists had said in 1995. Australian Dr Alan Watchman even removed a sediment sample from a large terrace to analyse by thermoluminescence dating. This sample, from 2.5 metres below the surface, was secured from feldspar grains, indicating a mid-Holocene age (3), which Aubry et al. have confirmed (2). 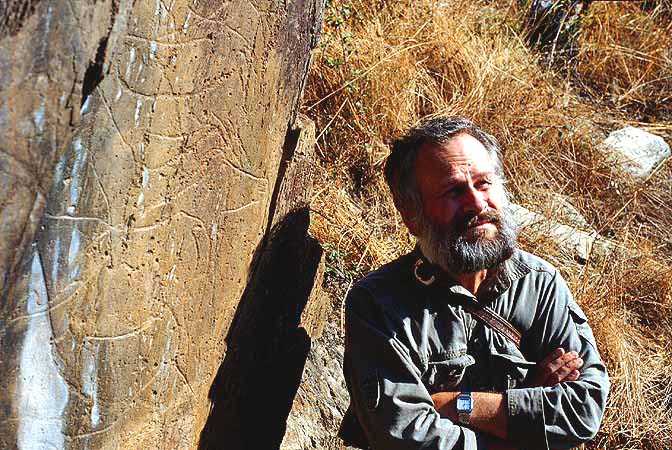 he author in front of a Penascosa engraved panel, IRAC ’98

The only possibly pre-Neolithic deposit found in the Côa valley is at the site of Cardina I, which is not a rock art site and located 25 m above the river (2). There, various ceramic occupation layers occur down the upper three quarters of the profile. Below that there are some distinctly microlithic stone tools, mostly under 15 mm long and identical to those in the Neolithic sites, apparently occurring without ceramics. They can therefore tentatively be assumed to be late Mesolithic (Figure 1). But again this provides no new information, it merely confirms the archaeometric finding that the oldest petroglyph found at the three main sites appears to be of Mesolithic age, perhaps around 6500 years. In Portugal, the Mesolithic period begins only about 8000 BP, i.e. much later than in most other parts of Europe. No radiocarbon dates earlier than 1000 BP have been reported by the Portuguese state archaeologists, although datable material was available from the sites. 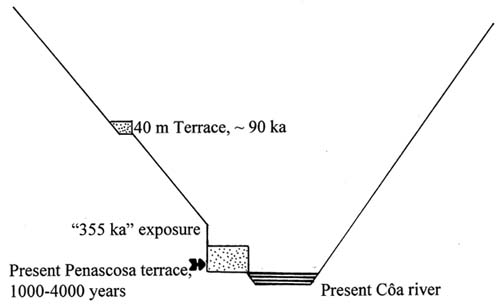 Figure 2. Schematic diagram showing the relationship of the Penascosa terrace, the 40 m terrace, and a supposedly 355,000 years old rock exposure “dated” by cosmogenic radiation products analysis. Clearly the rocks now exposed at Penascosa are much younger than the 40 m terrace

Zilhão and colleagues even report finding remnants of a Late Pleistocene terrace on the valley slope, 40 m above the present river level (Figure 2), which implies that the river was 40 m higher at the time it was formed. Since then the Côa has progressively excavated the present valley, which is a geomorphologically very recent feature. The apparently complete absence of Pleistocene sediments in the lower Côa valley, except high on the valley slopes, renders it very unlikely that the valley floor could ever yield evidence of an Upper Palaeolithic occupation. Even if such living sites were discovered elsewhere in the valley, their mere presence would of course not prove the Pleistocene age of the rock art, it would merely make it possible that some of the petroglyphs might be of such antiquity. However, all the archaeological evidence so far produced, from dozens of excavations, offers not the slightest indication of a Pleistocene occupation of the lower Côa valley.

The petroglyphs recently found at Fariseu, after the Pocinho water level was lowered by three metres, are reported to extend another three metres below the sediment, which is a little confusing as it implies that the excavation extended below the lowered water level. How is that possible? Moreover, the petroglyphs “present the white colour characteristic of recent, experimentally induced impacts on surfaces of the same kind of rock”. Dr Zilhão tries to explain away the completely modern appearance of these new petroglyphs by suggesting that sedimentation was so rapid that no weathering took place. But the Côa schists weather so rapidly that the white colour (which is attributable to the light reflected by recently crushed mineral grains) of fresh petroglyphs disappears within a few years, and to suggest that petroglyphs remain unweathered, even below sediment, for tens of millennia is naive, to say the least. Moreover, for the last 15 or so years, the site has been almost continuously inundated, and the petroglyphs would have to be badly corroded even if they were only a couple of centuries old. Consequently it appears that Dr Zilhão has fallen victim to a hoax or practical joke, which in view of the highly politicised status of this rock art corpus and the fanatical predispositions of some researchers involved in its study does not surprise. The issue could easily be clarified by independent microscopic examination of the new markings.

So far we have not seen a single radiocarbon date from any of the hundreds of excavations conducted in the Côa valley. I understand that many charcoal samples were recovered, so why have the results from them not been reported? Recently Dr Zilhão has been sharply criticised by palaeoanthropologists in relation to dating evidence for the Lagar Velho skeletal remains which he concealed because it did not suit his favoured interpretation. He has accepted these charges in a debate with Professor Tattersall. Until we are presented with credible scientific evidence of the kind that is customary in modern archaeology, the archaeology of the Côa valley remains in limbo.