For centuries there was no discussion about supposed Palaeolithic rock engravings in the Austrian Alps. Only in recent years have some references appeared, even some pages on the WWW (e.g. Bednarik), which necessitate clarification.

The international literature – which very seldom alludes to the eastern Alps – has produced the impression that there are two schools of dating for rock art in Austria: 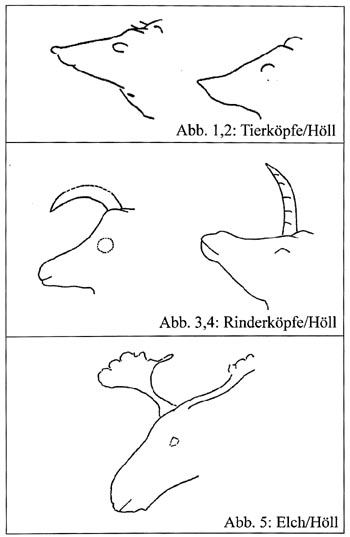 The non-Austrian reader was given the impression that numerous supporters of the respective theses were conducting passionate discussion. This impression by no means corresponds with the facts of the history of scientific investigations in the field.

What actually prompted the assumption of Palaeolithic rock art in the Austrian Alps? Despite the discovery and investigation of many important rock art regions in the southern and western Alps (Mount Bego, Valcamonica, etc.) long ago, the Austrian Alps still remained without any outstanding finds even after World War II.

To the credit of Burgstaller, who reacted to the first announcements of finds by foresters and hunters, the first documentation took place in the fifties and sixties: the Höll site in the Warscheneck Mountains, the Kienbachklamm site near Strobl, followed by a large number of further finds concentrated in the Austrian provinces of Salzburg, Upper Austria and Styria. 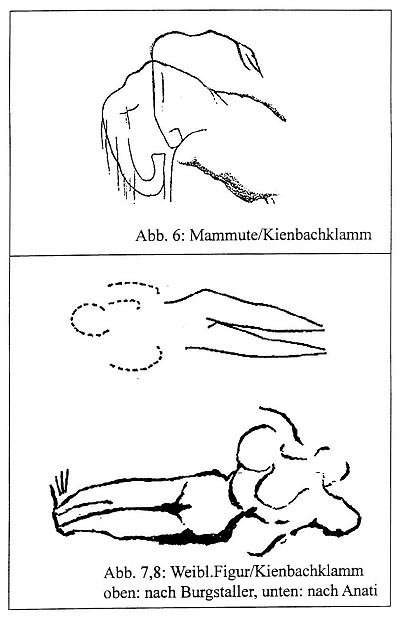 In both of the former two regions, Burgstaller found anthropomorphic and zoomorphic engravings that he described as “the most remarkable discoveries”. He compared the engraved cervid and bovid heads and one head of an elk with representations of the Franco-Cantabrian cave art (Altamira, La Madeleine, etc.) and stated striking similarities. But he was very cautious with chronological classifications at that time:

“Despite of the amazing formal conformity between the Austrian and the Palaeolithic art of western Europe, nobody will therefore draw conclusions about their time of origin. The conformity only proves that the Postpleistocene rock art did not disappear all of a sudden. It survived as a traditional style in regions of retreat for milleniums” (1971:49).

The catalogue of the Rock Art Museum of Spital am Pyhrn, published in 1979, states that “one must assume a very early time of production: interglacial or postglacial” (1979:13).

In the preface to the third edition of his book Felsbilder in Österreich, Burgstaller places great emphasis on the statement that the major part of the Austrian rock art belongs to the Bronze Age and the Iron Age. Yet he claims Palaeolithic origin for about a dozen of representations: some heads of unidentifiable animals (Figs.1, 2), the heads of extinct races like bos primigenius and bos longifrons (Figs. 3, 4), and one head of an elk (Fig. 5). Besides of the argument of stylistic similarities, he reports finding of Palaeolithic artefacts in some Austrian caves like Salzofenhöhle, Lieglloch and Rameschhöhle ranging from a few to dozens of kilometres away.

Burgstaller feels encouraged in this dating by the certificates of international experts like Breuil, Kühn, Anati and Okladnikov. However, with the exception of Anati, all of them only saw the photos, and their testimonials only agree with dating into the first millennium BC. Only Anati adds in one sentence that the beginning of rock art in the Warscheneck Mountains possibly could date into the Neolithic period.

As “final and best” evidence, Burgstaller considered the discovery of two mammoth drawings in Kienbachklamm (Fig. 6). In the appendix to the third edition of his rock art book he writes:

“They [the mammoths] are evidence enough for the origin of Austrian rock art, created by people who have seen mammoths themselves before the beginning of the last glacial period in the Alps” (1989:101). 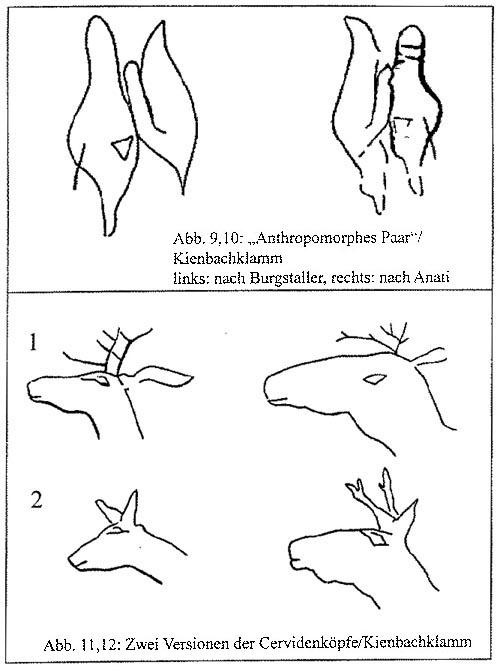 The only rock art researcher who accepted this dating without reservation was Wanke of GEFEBI, Graz. He designated the engraving of an elk as “the only certain Palaeolithic rock engraving in Austria” (1976:102).

The response of Austrian archaeologists and prehistorians was quite different from that reflected in some recent publications. There never has developed anything like a school which confirmed or propagated Burgstaller’s statement. Quite the contrary: the official academic doctrine decidedly distanced itself from this interpretation and even dismissed the Austrian rock art as manifestations of bored hunters and herdsmen of recent times.

The following are two examples of many: In his extensive work Die ur- und frühgeschichtlichen Funde in Oberösterreich, the Upper Austrian archaeologist Reitinger mentions the rock art of Kienbachklamm only in one line and classifies it as undatable (1968:381). Pittioni, professor of prehistory and early history at the University of Vienna, strictly rejected Burgstaller’s comparative method as it „is basically wrong to claim ancient periods of origin for the Upper Austrian rock art only because of formal conformities” (cited in Burgstaller 1971:97).

The only international author who assumed Burgstaller’s Palaeolithic dating was Anati. In a paper of 1980 he even went so far to say that the petroglyphs of the Warscheneck Mountains were the origin and starting point of the whole Palaeolithic art of the Alps. Although Burgstaller particularly stresses the declaration that Anati did not spare the effort of tiresome climbing up to the finds (1989:2), he committed some misleading errors in his reproduction of some engravings. A lying torso was supplemented by Anati to a female nude with large breasts – in no way corresponding to Burgstaller’s photo and drawing (Figs. 7, 8). An anthropomorphic couple was reproduced with similar generosity (Figs. 9, 10). Further misleading is the fact that he reproduced both engravings side-inverted and related them to the rock art site of Totes Gebirge (1991:54), whereas both in reality are located in Kienbachklamm.

One of the most recent comments is included in the rock art guide book Sui Sentieri dell’Arte rupestre published by the Italian research group “Gruppo Richerche Cultura Montana” together with “Cooperativa Archeologica Le Orme dell’Uomo”. Author Fossati subscribes to neither of the two extreme datings (all ancient or all recent). For him the possible solution lies in the fact that both thesis contain acceptable elements, but both must be refuted because of their exclusiveness. So Fossati ascribes some engravings like hunting scenes or figures of birds to the Prehistoric period, but attributes the main part of the eastern Alpine rock art to the Middle Ages and more recent times.

As we turn from the historical truth about the development of the discussion about supposed Palaeolithic rock art in Austria, let us now consider an evaluation of the facts as seen from the viewpoint of modern rock art research.

The general question is whether it is even possible that rock engravings can survive on exposed limestone rock in the alpine climate as much as 10,000 or 20,000 years. The distinct answer of a geologist must be negative. It is not sure which amounts of weathering can be supposed for the 10,000 years since the last glacial period or even for the times before. Certainly we cannot assume the amounts of recent times, because the chemistry of the atmosphere has changed dramatically during the last 100 years due to human intervention. However, a retreat rate of 2-20 mm/1000 years assumed by Bednarik defines a realistic spectrum of what might be possible. This means that a vertical or slightly inclined rock surface has retreated 2 – 20 cm in 10.000 years and 4 – 40 cm in 20.000 years. Therefor it is theoretically impossible as well that engravings can survive on an exposed limestone wall over such periods. As not a single example of the engravings in question was found in a really protected location (in caves, under rock shelters, etc.), we cannot seriously discuss a Palaeolithic age as the time of origin of such art.

Inspections of recent years failed to establish the exact locations of the engravings in question. The grooves at the supposed sites in no way differ from the surrounding parts of the rock surface.

Thus the only materials to be investigated nowadays are the photos and drawings of the discoverers (Burgstaller and Lauth). Careful study suggests the following division: With a bit of fantasy, some animal heads of the Höll site can be seen on the photos. However, the other photos — neither of the elk head nor of the female torso and least of all of the mammoths — do not support Burgstaller’s interpretation. In total there is no evidence that the grooves in question are artificial ones. Further observation attests that Burgstaller himself was very insecure in documenting the engravings: In one publication he offers two quite different drawings of the same animal heads of the Höll site (Figs. 11, 12).

Careful consideration reveals a question from the field of perception research, a modern branch of psychology: People tend to see what they want to see. Could this have been Burgstaller’s pitfall? It is not necessary to know about the latest results of investigation in the field of human brain for accepting the fact that our brain constructs realities.

In summary, the following may be said about the misunderstandings and misinterpretations surrounding the “Pleistocene” rock art of Austria:

Seen from a present-day view, one can agree with neither Burgstaller’s interpretation nor with his dating. As long as no sensational new discoveries are announced, we need to conclude the debate about the supposed Pleistocene rock art of the Austrian Alps.

Note. This paper by no means intends to accuse Burgstaller of forgery. On the basis of personal conversations and correspondence with Burgstaller, the author believes that Burgstaller is completely convinced of the correctness of his interpretation and dating. His self-defined life task was to establish the ranking of the rock art of the Austrian Alps as equal to the most famous sites in Europe, thus filling the gap between Italy and Scandinavia.