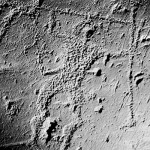 Two recently discovered rocks at Vite, Vite-Deria area, Paspardo (Valcamonica, BS).
During the researches of 1997 six new rocks engraved have been put in light: two of them have very big dimensions and we want to point out these surfaces for the particular styles and few important themes present.

The site called Vite (La ‘it in Camunian dialect) is found in the Vite-Deria area, inside the Municipality land of Paspardo in the Brescia Province. It is base between 700 – 800 m on the sea level, on the left side of the middle Valley, and borders the upper part of the new road that put in connection Paspardo (1000 m on the sea level) and Capo di Ponte (350 m). The construction of this new road, called “new Deria road”, in fact still existed an ancient road with the name of “Deria road” following more or less the same itinerary, has obliged the beginning of a work of cataloguing and drawing of the rocks engraved, especially after the damages of some rocks engraved made by the workers of the new road. Some other rocks were endangered by these works so this is why we took the decision of survey and document the entire area.. 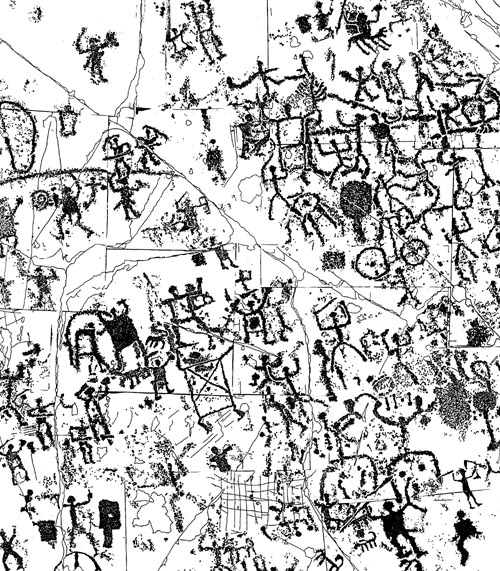 In 1990 the Municipality of Paspardo, owner of the area and conscious of the historical and cultural importance of the rocks engraved of his land, decided to start a methodical campaign of documentation, entrusting the realization to the Cooperativa Archeologica “Le Orme dell’Uomo”, under the permission of the Archaeological Superintendency of Lombardy and with the accordance of the Regional Park of the Rock Engravings (the rocks engraved are amid the territory of this park). Between 1990 and 1998 the following engraved sites have been analyzed: “La ‘It”, “Al de Plaha”, “La Bosca”, “Bröscaroeula del diavol”, “Le Scale”, “Dos Baitì”, “Deria”. “. 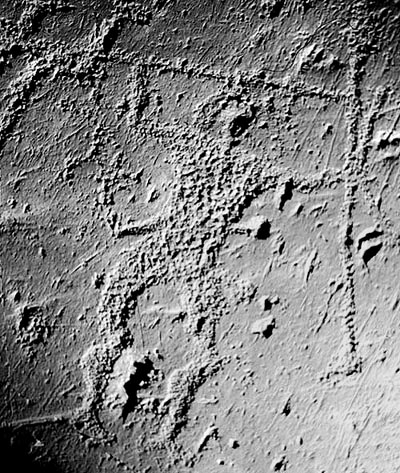 During archivistic and bibliographical researches it has been noted that the area was already known during the thirties, thanks to the discoveries of Giovanni Marro, an anthropologist, director of the Anthropology Museum of Turin. Walking in the woods, next to the two ways utilized by the people to reach Paspardo from Capo di Ponte, he found a lot of rocks engraved. A large number of photographs, kept in the Anthropology Museum of Turin, show figures coming from the rocks of these sites.

The rock art complex of the Vite-Deria area today analyzed, constituted by almost 70 rocks engraved, can be dated to two different phases: an old period, that can be attributed to the end of the Neolithic and the beginning of the Copper Age, composed by topographical representations, and one more recent phase, datable to the Iron Age, in which one can find the usual iconographic repertoire based on the warriors figures engaged in duels, hunting, dancing, and other armed attitudes. The Bronze Age figures are less numerous, but these are known in other sites and rupestrian areas (e.g. In Valle, Dos Costapeta, Dos Sulif). The last engraving phase can be attributed to mediaeval and more recent phases: there are crosses, keys and dates, but also warrior with trident pikes. 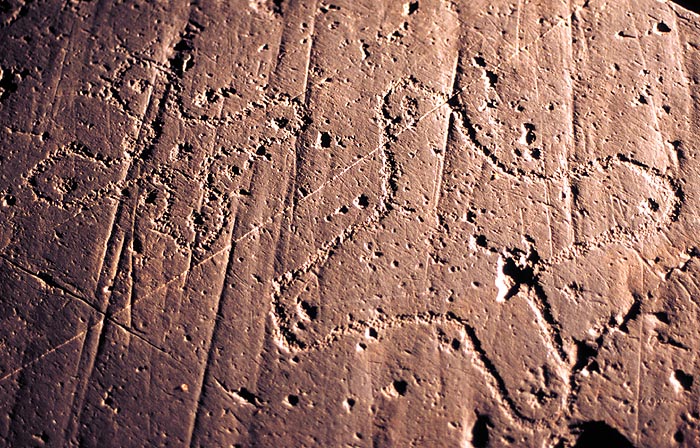 During the researches of 1997 six new rocks engraved have been put in light: two of them have very big dimensions and we want to point out these surfaces for the particular styles and few important themes present. On both the drawing have been obtained only with great difficulty due to the extreme gradient of the rocks: it has been necessary to be tied with a rope and construct some scaffolding with logs, systems that could be utilized also in the prehistory by the engravers themselves.

The rock 51, in the steepest part of “la ‘it” site, overlooking the Re stream and the Fuos valley, has supplied a very rich documentation, with more then 150 figures. Among the most ancient engravings, attributed to the Final Bronze Age, some praying figures are visible: one of them is a female. There are only few figures associated between them and perhaps they are in relation with two figures of shovel, a very usual theme in the Bronze Age rock art. on the rock are present also warriors of different figures, especially those of the style 4th 2 (7th-6th cent. BC), 4th 3 (5th-4th cent. BC) and 4th 5 (1st cent. BC – 1st cent AD). Attributed to the 4th 2 phase is a nice deer-hunting scene. Some axes of two different typology – with quadrangular blade (6th-4th cent. BC) and with half-moon shaped blade of the type called Hellebardenaxt (3rd cent. BC – 1st cent. AD) are very important from the chronological point of view. Some warriors are represented with a typical Etruscan style (5th cent. BC). The hut engraved by scratching the rock is very rare and it is datable to the 4th 3 phase (5th-4th cent. BC). The three inscriptions engraved on this rock are in the so-called camunnian alphabet: it is notable the q and the f; also some e with six vertical lines (instead of the usual three) look associated with warriors of the phase 4th 2-3 (6th-5 cent BC).

Another rock, not far from the last, is the VIT 54: it has more then 700 figures and for this reason is one of the most engraved rock in Paspardo and in the entire Valcamonica. It comprises an extension of 30 m linear: on this surface it is shown the almost complete imaginary of the camunnian world from the Middle bronze Age to the end of the Iron Age: shovels, praying figures, a chariot, duels, hunting scenes, horsemen, huts, weapons, footprints, cup marks, and 9 camunnian roses. As the rock 51 also the VIT 54 has not only axes with quadrangular blade and Hellebardenäxte, but also two inscriptions in the camunnian alphabet. Two big figures of warriors (the biggest is 140 cm in height) have been recognized as figures already seen by the late G. Marro in the thirties. Another point of contact between the two rocks is the presence of a pair of warriors engraved with a style clearly influenced by the entruscan art (5th cent. BC). One of the two warriors appears with a complete panoply wearing a crested helmet, holding in one hand a spear and in the other hand a shile with another spear: a sword is still in the scabbard attached to the belt.

The themes of the engravings that appear in the two rocks (duels, huntings etc…) suggest a ritual interpretation of the imagery. The figures were probably realized during initiation rites of the youth of the noble class: they probably used to engrave the rocks during fairs or ritual anniversaries in which happened competitions, duels and physical exercises. The difficulty with which many of the figures were made, due to the extreme gradient of the rocks, seems to confirm these suppositionsi.