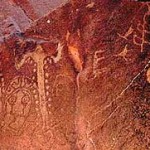 Another serious menace to a major rock art site. What can we do? We can start from the online petition Save Dampier rock art.

Murujuga petroglyph is one of thousand to be destroyed by entirely unnecessary state vandalism.

The Dampier Archipelago in the Pilbara region of north-western Australia features what is regarded as the world’s largest concentration of petroglyphs (rock engravings or carvings). It also possesses a major corpus of standing stones, similar to megalithic monuments in Europe, the largest such occurrence in Australia. This outstanding body of Aboriginal rock art is considered to be the greatest non-European cultural heritage property in Australia, and is thus one of the major heritage sites in the world.

During the 1960s major industrial facilities were established in the remote archipelago. Current plans by the Western Australian government of further extensions to this industrial complex designate 38% of the land area to be occupied by petrochemical and other plants.

At present levels of atmospheric pollution, most of the Dampier petroglyphs will disappear during the second half of the 21st century. However, if the emissions are trebled, as proposed by the W.A. government, this process will be accelerated greatly, and scientific data predict that the rock art will begin to disappear by about 2030.

The expansion of the industrial complex by adding a multi-billion dollar petrochemical industry is opposed by scientists, conservators, conservationists and by the owners of the rock art, Aboriginal people of the region. Moreover, the local shire council objects to it strenuously and requests that the development be located at Maitland on the mainland, an industrial estate set aside for this very purpose. Even one of the companies involved in this development prefers Maitland for logistic reasons, as does every stakeholder in this issue.

This is not a confrontation between those who are for or against development. None of the parties opposes the development as such, they merely want it relocated away from the Aboriginal sites. The International Federation of Rock Art Organisations (IFRAO) demands that the State Government exercises its responsibility of protecting the Dampier rock art, and that it implements a management plan for the archipelago after proper consultation of the stakeholders. IFRAO has the support of the world’s rock art researchers, indigenous communities, the conservation movement, the state opposition and of those wanting cultural heritage preserved. This Web-site serves to inform about our struggle to save these magnificent galleries of hundreds of thousands of irreplaceable rock art images recording tens of millennia, and it solicits the support of the citizens of the world.

Please visit the following pages featured on this site: