Rock Carvings in the Borderlands 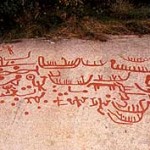 Bohuslän/Dalsland in Sweden and Østfold in Norway. An INTERREG IIA project. Final report.

This is a brief presentation of a final report of an extensive INTERREG IIA project Rock Carvings in the Borderlands that was the result of a co-operation during 1996 to 2000 between the County Administrative Board of Västra Götaland in Sweden and Østfold County Council in Norway.

The location of the project area

The project was partly financed by the European Regional Development Fund and by Norwegian government Interreg funds.

The border region comprises the counties of Bohuslän/Dalsland in Sweden and Østfold in Norway contains has one of the richest occurrences agglomerations of rock carvings in the world. Within this area, more than 75,000 images into 5,000 sites have been carved or hacked into the rock. The choice of motifs is rich and varied – from simple cup marks and circular figures circles to advanced, artistically carved images more complex designs like artistic depictions of people, ships, animals and weapons. The images are often combined to form scenes and expressive compositions. These rock carvings are an art treasure and an invaluable part of Europe’s prehistoric cultural heritage. UNESCO has therefore included the rock carvings at Tanum, Bohuslän on its the World Heritage List of Sites.

The images that were once carved into the rock – at that time the most durable material known to man – are now beginning to show signs of heavy degradation and are disappearing at an increasing rate. It seems that this is mainly due to a combination of two factors; increasing air pollution caused by man and natural weathering. If this degradation is allowed to continue at its present rate, many priceless rock carvings will soon be destroyed and as a consequence the region will loose an important part of its cultural identity. 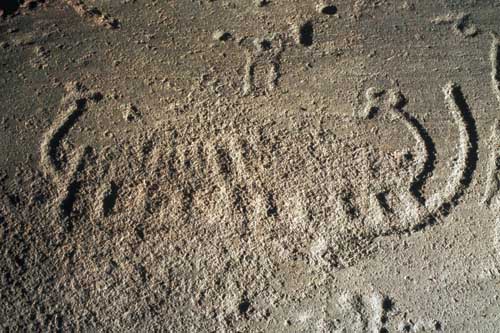 The aim of the INTERREG IIA project, Rock Carvings in the Borderlands, was to establish an inter-disciplinary, cross-border network of the most highly qualified experts from Norway and Sweden in order to improve the knowledge and the tools for an effective management of rock art and thus make it possible both to preserve and to use the rock carvings to develop a sustainable cultural tourism. In order to fulfil this task the project has achieved the following goals: 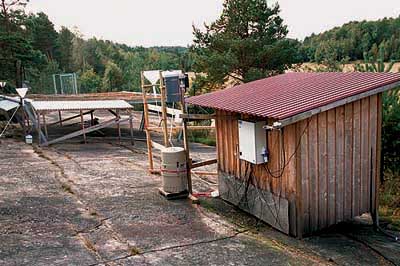 A research site in Tanum, Bohuslän, designed to investigate the mechanisms of weathering. Photo: Jan Magnusson) 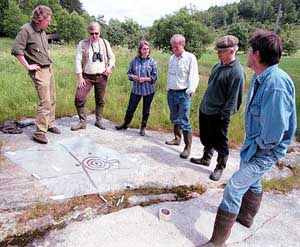 A plastic tracing is discussed by some of the participants in a documentation seminar (From left to right: David Vogt, Ulf and Catarina Bertilsson, Gerhard Milstreu, Jarl Nordbladh and Kenneth Ihrestam). (Photo: Jan Magnusson)

250 people participated in the project over a 4-year period, totalling 64 man-years and the total turnover was 5,5 million euros.
The final report can be ordered free of charge from 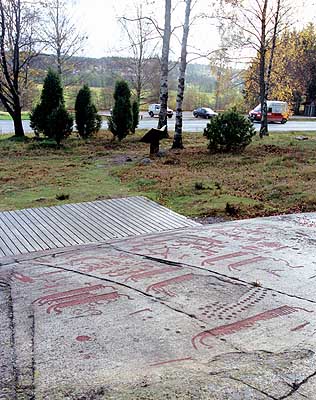 A rock carving site at Fossum, Bohuslän, prepared for public access with a platform, information signs and a car park. (Photo: Jan Magnusson)