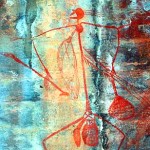 Dear People.The rock art and landscapes of the Australian Aboriginal is amongst some of the oldest on earth. We will camp in peaceful surroundings – and will have opportunity to swim in streams and waterholes.

Dear People. The rock art and landscapes of the Australian Aboriginal is amongst some of the oldest on earth…

The Victoria River region of the Northern Territory is unique for the large amount of rock art galleries it contains – and for the fact that Aboriginal elder Bill Harney allows visitors to accompany him as he explains the art and culture of his people. – (see attached CV )

The old people like Bill are dying out and soon this firsthand knowledge will be lost. In 2004 we have been asked to facilitate a documentation of Bills country and art and culture for future generations.

So it is that we will be heading out with Bill with a cameraman, a story writer and an assistant to film Bills stories before they are lost.

Due to enormous interest in Bills stories – in part due to the success of his books – Born Under a Paperbark Tree and recent release of Dark Sparklers (a story about the Aboriginal look at the stars)- and also for Bills international recognition – we are opening up the expedition to members of the public who have enquired about such a trip.

This email has been targeted to people who have expressed interest before – or whom we believe are associated with a group who might be keen to come along. The trips are not being opened up to the general public.

Their will be four trips this year.
The dates are:

The expedition will leave Katherine at 8am first day and return and to Katherine 5pm last day (Katherine is 300 klms south of Darwin) There is ample transport alternatives to get from Katherine to Darwin.

The area we travel will be wilderness with no facilities other than what we carry. Tents and bedding will be provided and all meals will be cooked ‘out bush’.

We will camp in peaceful surroundings – and will have opportunity to swim in streams and waterholes.
A bush toilet and shower will be available. 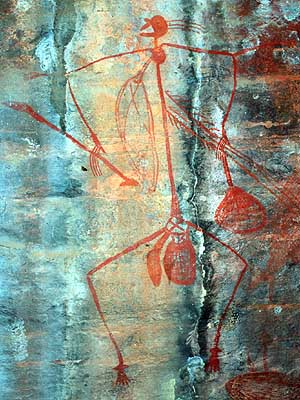 The cost per person will be $Australian 1250 and include all meals, camping and four wheel drive transport.
Days activities will involve hiking and four wheel driving to rock shelters and overhangs, opportunity to see lots of wildlife, and around the fire at night hear more from Bill as we share in singing , didgeridoo playing and guitar….

We will be away from the tourist route and can guarantee this as a once in a lifetime experience.
If you want to get away from the maddening crowds , in an area where you can almost hear your heartbeat , and hear stories of a culture that we could do well to learn from – you would be welcome.
We plan to limit each trip to a maximum of 12 people – including the three film makers.

If you would like to accompany one of the trips, or have a group who would like to come on a ‘private basis’ – ie you have the trip only with your group – please respond to either:

Mike Keighley in Australia or Paul Taylor in the USA. 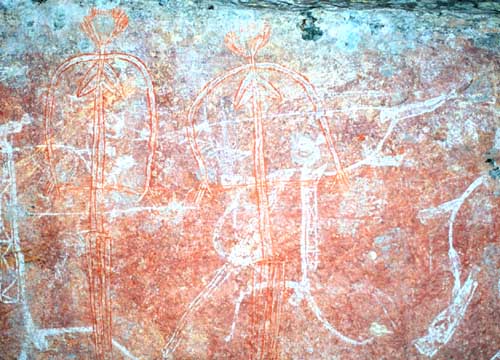 YDUMDUMA BILL HARNEY, an Elder and Senior custodian of the Wardaman people of the Victoria, Flora and Katherine River Districts of the North Territory of Australia.

Ydumduma was born on the bank of Brandy Bottle Creek in the MUY MUY clan country of the Wardaman people, in the early 1930’s to his mother Ludi. Ydumduma himself is of the YBULYAWUN clan of the Wardaman Nation. The Nation once comprised 11 clans, today the members of a mere 5 clans, survive.

Wardaman were an extremely aggressive and successful Tribe having controlled the major parts of three river systems. They drove the early pastoralists from the traditional Wardaman lands. Over 40 years elapsed before the Wardaman were finally subdued by the European and then at a tremendous cost to the invader.

Wardaman were massacred in their hundreds and returned that horror many times on the European usurpers, killing police and pastoralist alike, in reprisal for their own maltreatment.

A proud and resourceful people, the elder warrior males, observed in their splendour still, as late as the 1930’s and described in the records as “the hereditary Lords of the Wardaman people” by an author who happened upon them in close proximity of the township of Katherine.

From this high quality of human stock descended Ydumduma.

Ydumduma was raised and educated in the traditional ceremony’s of his ancient people by Jumorji, a senior lawman of the Wardaman and Ydumduma’s Aboriginal father. From Jumorji, Ydumduma takes his country and his heritage, for the Wardaman practice a patralinial hierarchy, with eight moiety groups.

Ydumduma is steeped in the law and ways of his people as well as having a strong knowledge of the laws and ways of the Muningja (White man).

Ydumduma is not formally educated in the system of the white man, the systematic process of his people’s dispossession deprived him of that, yet his white man knowledge, gained by his life experience, is vast.

He is semi-literate and semi-numerate. As an aboriginal he speaks seven languages and is the last senior lawman (knowledge custodian) of his people.

In the White man way of things Ydumduma is an Emeritus Professor.

In the law of his people and their closely affiliated tribal neighbours, he is the equivalent of the Chief Justice of the High Court of Australia. The Big Lawman, wherever he is, among the Aboriginal peoples of Australia, a man accorded the highest respect.

In the white man’s world he began work at 8 years of age in the Stockcamps of the big English Pastoral Company, Vestey’s, who for a time possessed the rich traditional land of his people. Vestey’s pursued and won a huge fortune from the grazing of cattle on the lands of Ydumduma and those of his ancestors.

He began as a lowly horse-tailer and rose to become head-stockman, the highest employment category and responsibility an Aboriginal male could achieve at that time.

He was, for a time head-stockman for the famous family of European Cattle Barons, the Durack family. Ydumduma retains that family’s respect to this day and that of many other Europeans.

He has travelled widely in this land and in other nations of this world, promoting his cultural heritage and the magnificent art record of his people.

Ydumduma is widely regarded as a Master story teller or songman of his people; his fame is both national and international.

As an artist in his own right, Ydumduma has works all over the globe, paintings in the National Gallery of Australia, the Federal Parliament and the Northern Territory Legislative Assembly.

He is a co-author of 2 books ‘ Born Under the Paperbark Tree’ (1996) or the University of the Bush and ‘Dark Sparklers’, a Wardaman interpretation of the cosmos (2003).

He gathers and processes the traditional didjeridu timber, makes, paints and performs with that haunting instrument. From this and the paintings of his ‘dreamings’ he now makes a living, supporting an extended family of some 30 people.

Ydumduma has never been on the Welfare Line and although of Pension age, steadfastly refuses to be kept by the Government.

Ydumduma has at various times in his long working life been a crocodile hunter, a Buffalo hunter, a fisherman, a fencing contractor and today still conducts guided tours of his traditional lands.

An extraordinary and successful businessman (a rarity amongst his peoples) his products, stories and tours are in incessant demand.

He will travel to Sydney in November 2003 with his youngest son, Hederick, to launch, with his co-author, his latest publication ‘Dark Sparklers’ at St Andrew’s College of the University of Sydney.

Amongst humans Ydumduma is best described as ‘one of Natures Gentlemen’, others have described him on of Australia’s living ‘National Treasures’. An extremely knowledgeable, intelligent and gregarious man.

Ydumduma, since 1976, has been responsible for the return to his people of 5,000 square kilometres of their traditional lands. He is actively leading his people in the acquisition of further Freehold land at present.