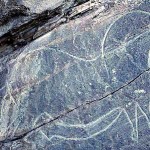 This gathering about the archaeology of the Trás-os-Montes region in Northern Portugal marks the tenth anniversary of the disclosure and campaign to save the Côa Valley rock-art.
The River Douro flows along the east and southern boundaries of a region characterised by deep steep valleys, many of which are dressed with winding,cascading wine terraces.
New and old live side-by-side, at times, in harmony, and sometimes in discord. It is not unusual for tradition to dictate what may or may not be done, reminding us that only the imprudent and foolish cast aside wisdom drawn from the past.
With this thought in mind, we hope this gathering may provide the opportunity for us to reflect on and discuss knowledge that can be retrieved from the past, looking back at what was and thus gain an insight of what could and should be.
Why Freixo de Espada à Cinta?

Freixo de Espada à Cinta had its début in 1981 when the scientific community heard that Palaeolithic style rock-art in the open-air existed near a small village called Mazouco.

Now, once more, this beautiful and peaceful place is coming out, opening its doors and welcoming scholars and enthusiasts to change the town into the Rock-Art Capital of the Douro.

The Municipality of Freixo de Espada à Cinta has, from the outset, supported this endeavour to forge a series of cultural and scientific events in Portugal’s hinterland.

An array of similar finds such as Siega Verde near Agueda in Spain and the renown Côa Valley lie around Freixo de Espada à Cinta, which is on the Cross-Border Rock-Art Itinerary being developed for the European Union’s XXI Century Douro/Duero INTERREG III-A Project by the University of Trás-os-Montes and Alto Douro in Portugal and the University of Salamanca in Spain.