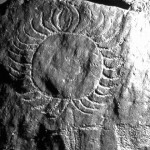 A labyrinth figure, possible ancient initiation game, lies on rock 1 of the National Park of the Rock Engravings of Naquane, Capo di Ponte, just in the centre of a site that once was simply known as Aquane. This probably was one of the most important areas of cultual activities related to the rock art tradition in Valcamonica. Looking at this rock with the eyes of a non-expert visitor, the surface will appear as a confused set of figures: men and dogs are hunting deer, while women are working on looms, duellists are fighting while warriors follow a horseman fully armed, probably a chief. 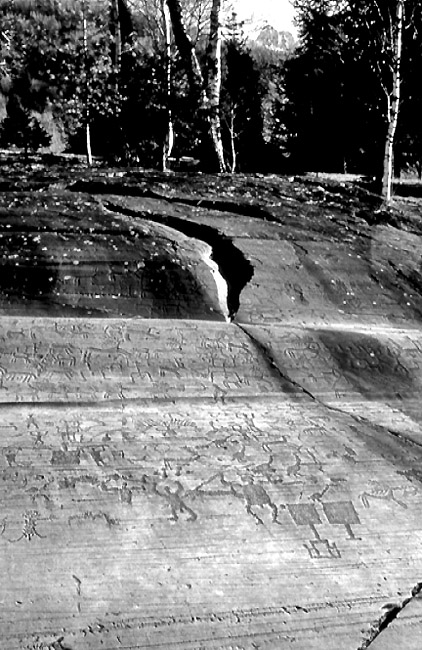 Most of the figures appear connected to other engravings: cup marks, shovels, footprints, huts. All this imagery, depicted on the rock all around the labyrinth, is the witness of the last prehistoric rock art phase on this surface: that of the Iron Age, a period where rock art appears as the production of the male warrior class of the Camunnian society (DE MARINIS 1988; FOSSATI 1991). Women are not present within this art. Scholars think that almost 80% of the 300,000 engravings of the Valcamonica rock art tradition belongs to this period, the first millermium BC. However, is the entire rock art tradition a construction of the male classes or is it possible to define themes and figures related to female activities? The basis for this idea is, in fact, what would be still possible today: 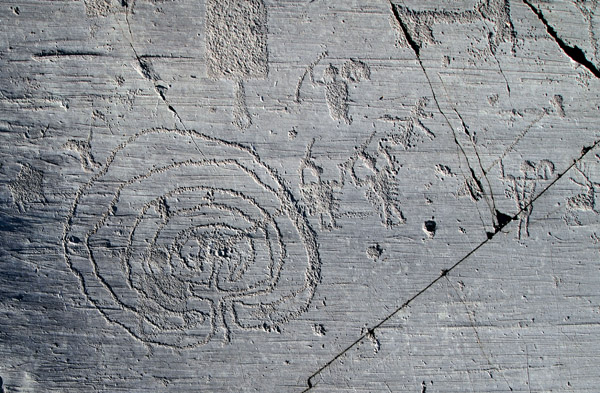 The labyrinth on rock 1 of Naquane

This paper develops ideas presented in the paper Nymphs, Waterfowls and Saints: the Role of Ethnography in the Interpretation of the Rupestrian Tradition of VaIcamonica, Italy, in the Seminar Ethnography and rock art, organized by the Oregon Archaeological .Society, Portland 3-6 September 2002. All figures, where made by the author or “Le Orme dell’Uomo”.