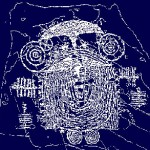 The discovery of new engraved stelae at Ossimo Superiore in 1988 provided a long-awaited opportunity to excavate and study ceremonial Chalcolithic (or Copper Age) sites in Val Camonica and the central Alpine region (1). Investigations at the main site, L’Anvòia OS4, were resumed in 1993 and are currently in progress (2)…

… Here we announce a new publication (***) in which the results from 1988-95 are summarized with a particular emphasis on ritual context and behavior, and an extended discussion of methodology and prospects. Preliminary information has been added on the proceedings of the latest field seasons (pp. 67-82).

The Ossimo-Borno Plateau is a 9-kilometer-long saddle, suspended at about 1000 m between lower Val Camonica and a lesser tributary basin to the west, the Scalve Valley, in the Lombardy pre-alpine zone (northern Italy). To the northeast the plateau is connected with undulating terraces and a highly dissected interfluve area, the Inferno District, particularly rich in scattered finds of prehistoric stelae or “statue menhirs”. OS4 is located within this district at an elevation of about 850 m, on a small est-west ridge surrounded by mixed deciduous-conifer woods. In 1988 a nearby site discovered on the same occasion, Passagròp OS5, was also tested. OS4 and OS5 were the first prehistoric excavations to be carried out on the plateau, as well as the first controlled investigations of Chalcolithic “stelae sites” in the Central Alps.

At both sites, excavation has shown that the surfacing stelae were still in their primary context.

In addition buried monoliths were found. Significantly, the OS4 excavation also produced artifactual and ecofactual finds, including pottery, unbaked-clay objects, flint artifacts (an engraving burin, a broken reaping knife), coloring lumps and sticks, charcoal bits, a single charred bone, “figured” manuports, and plenty of large-sized flakes and fragments from shattered stelae. Most of these finds are clearly to be associated with the preparation and ritual functioning of the site, some indeed pointing to unexpected and puzzling behavior. Evidence of at least 12 and possibly as much as 15 stelae has now been obtained, thanks to the identification of abundant re-used fragments in modern dry-stone huts from two satellite areas of the site (OS4A and OS4C). The preliminary perception of two main levels in the prehistoric layer at OS4, combined with the observation of several phases of engraving on a number of stelae (including in situ stele Ossimo-4), implies some complexity and duration for the site.

The OS4 site is examined in terms of setting, geology and lithology, stratigraphy, cultural features, small finds, “symbolic” monoliths and spatial organization. Inferences are drawn from the spatial patterning of finds for behavioral and ritual manifestations, including the history of individual stelae from manufacture and positioning to abandonment and collapse. In this context, a summary is given of the “morphotechnic” analysis of the ornated stelae and other main stones (3). A revealing case is stele Ossimo-12, so far reconstructed from two large fragments from OS4A: after an earlier phase represented by a dagger-and-belt composition, this huge monolith was taken out of the ground and re-engraved upside-down according to a later ideology (rows of hand-to-hand humans).

In addition to such analyses, the small but increasing amount of cultural residue associated with the monoliths provides a first glimpse of cult performances at a Copper Age ceremonial site in the middle Alpine region.

Artifactually, site OS4 belongs to the Copper Age 2 culture of Val Camonica, as known from a settlement at Breno Castle, c.2800-2400 cal. BC (4). Engraved motifs show continuation of both the OS4 and OS5 sites during the Copper Age 3 or Bell Beaker (Vaso Campaniforme) horizon, c. 2400-2200 cal. BC, according to the proposed seriation of R.C. De Marinis (5).