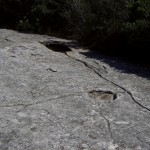 A large number of archaeological sites and artifacts dating back to prehistoric times in Finale Ligure area (Western Liguria), are due to the appearance of the first manifestations of human religiosity. The Author, in light of these finds, explores the primitive roots of the religious phenomenon.

As described in masterly way by the works of Luigi Giussani (14), (15), the religious factor is an integral part of true nature of the man. Coincides, in other words, with “ineradicable and irrepressible” questions as: “what is the meaning of life, pain and death?” and “why it is worth living?”.

These questions are the ontological foundation of life and men has always tried to relate their lives of creatures destined to die, with the total meaning of life itself.

In archaeological research conducted in the zone of Finale Ligure by the Author of this work, the encounter with the religious factor, has confirmed the view taken by Giussani: since the beginning of its existence, the man had a relationship with the mystery of the Godhead.

The Finale is a unicum. From geological point of view, in fact, the high frequency of karst features (with the formation of natural cavities), promoted, since ancient times (350,000 years ago), the human presence.

The discovery of “bifaces” from Plateau of Manie and Grotta delle Fate settlements dates back, in fact, to the presence of Homo Erectus. The Grotta delle Fate and the Arma (a Ligurian term to indicate a cave) delle Manie have also returned the skeletal remains of Homo Neanderthalensis who lived during the Middle Palaeolithic (120,000 to 38,000 years ago). It is with Neanderthals that appears the first documentation certainly related to the religious: the burial of the dead that took place in the caves themselves, were oval in shape, covered with stone slabs. This ritual demonstrates the respect of these primitive men for the deaths. The simultaneous presence in the burial of objects of daily life (food, stone tools, and jewels with engraved decorations) and red ocher (that recalls the blood, as a vital element), could be related with the hope of new life, after the death of the body.

About 38,000 years ago in the Upper Palaeolithic, during the last great glaciation that marked the extinction of Neanderthals, Homo sapiens sapiens appeared: in the cave of Arene Candide were found several graves, including the most famous of them is the “Young Prince” (dating back to 24,000 years ago), so named for the rich outfit that accompanied this man, who died prematurely, in his life after physical death.

In the Neolithic Age (which grew, in Liguria, from 5,800 to 3,600 BC) the man, nomadic hunter and gatherer, became a farmer and rancher. The better control of natural resources, made ​​man sedentary, led an increase in population with the simultaneous change in social organization and the introduction of the concept of “property”. In less than 2,000 years, man’s life changed more significantly than during the previous 2 million years: a radical mutation known as the “Neolithic Revolution”.

The archaeological finds at Arene Candide, Arma della Pollera and, quite recently, at Pian del Ciliegio Rock Shelter (Manie Plateau) date from, mostly, the period of “Impressed Ware Culture” (Early Neolithic: 5,800 to 5,000 BC) and “Square-Mouthed Pottery Culture” (Middle Neolithic: 5,000 to 4,200 BC). They are associated with cults and rituals that developed in the MediterraneanBasin, connected to the reproduction and growth of plants and animals. The discovery of female figurines features would seem, in fact, tied to propitiate the fertility of the land and flocks (6).

From 4th millennium BC, the man increased knowledge concerning the processing of metalliferous minerals. Following the development of metallurgy, the communities were organized into increasingly complex structures, with true hierarchical structures. Hillforts (Photo 1), known as Castellieri or Castellari, were built in high places. In Finalese have been well studied: Hillfort of Verezzi, Castelliere delle Anime on Rocca di Perti, Sant’Antonino, Monte Sant’Elena above Bergeggi. 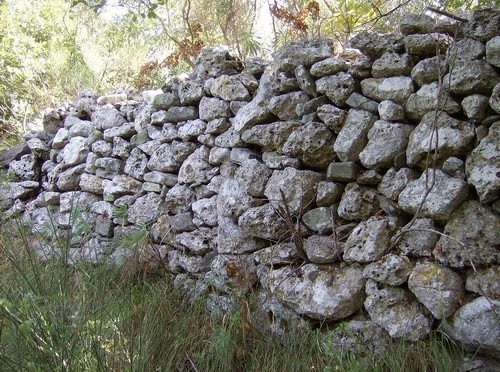 Distinct ethnic identity were defined, linked to quite distinct geographical areas. In the North Western Italy and in Southern France, between the Middle Bronze Age (about 1,600 BC) and early Iron Age (about 900 BC) appeared the characters of a new people: the Ancient Ligurians, one of the ethnic groups of pre-RomanItaly.

Since the end of the fifth millennium, at the end of the third millennium BC (a period covering the Neolithic and Bronze Age), developed a civilization related to the cult of the stone. Megalithic buildings were erected: single and/or aligned Menhirs, Dolmens and Cromlechs (megalithic fences). The presence of such structures is often related to areas of engraved rocks, believed to be contemporaneous with each other.

The significance of this proximity, could be explained as a sign of the presence of the “sacral”. In this regard, the engraving of “prayers” confirm this hypothesis. Cups and gutters, may be, instead, have been used as containers and liquid collectors (organic and / or meteoric) for ritual purposes (7), (8), (9), (10), (11). The “cruciforms”, may be, on the other hand, signs of Christianization and, as such, be ascribed to more recent times. This would confirm the attendance of these sites even in Roman, Medieval and, perhaps, even more recent Ages, with purposes (hunting, animal breeding, agriculture) that differed from the originals.

With the Iron Age (that, in Liguria, developed between 900 and 180 BC) the stele statues (or anthropomorphic steles) made their appearance: these standing stones with engravings are well represented in the Lunigiana (Eastern Liguria). Currently, the only example, found in the Finalese area, of this artifact is the rudimentary stele of Pila delle Penne (Photo 2 and 3). 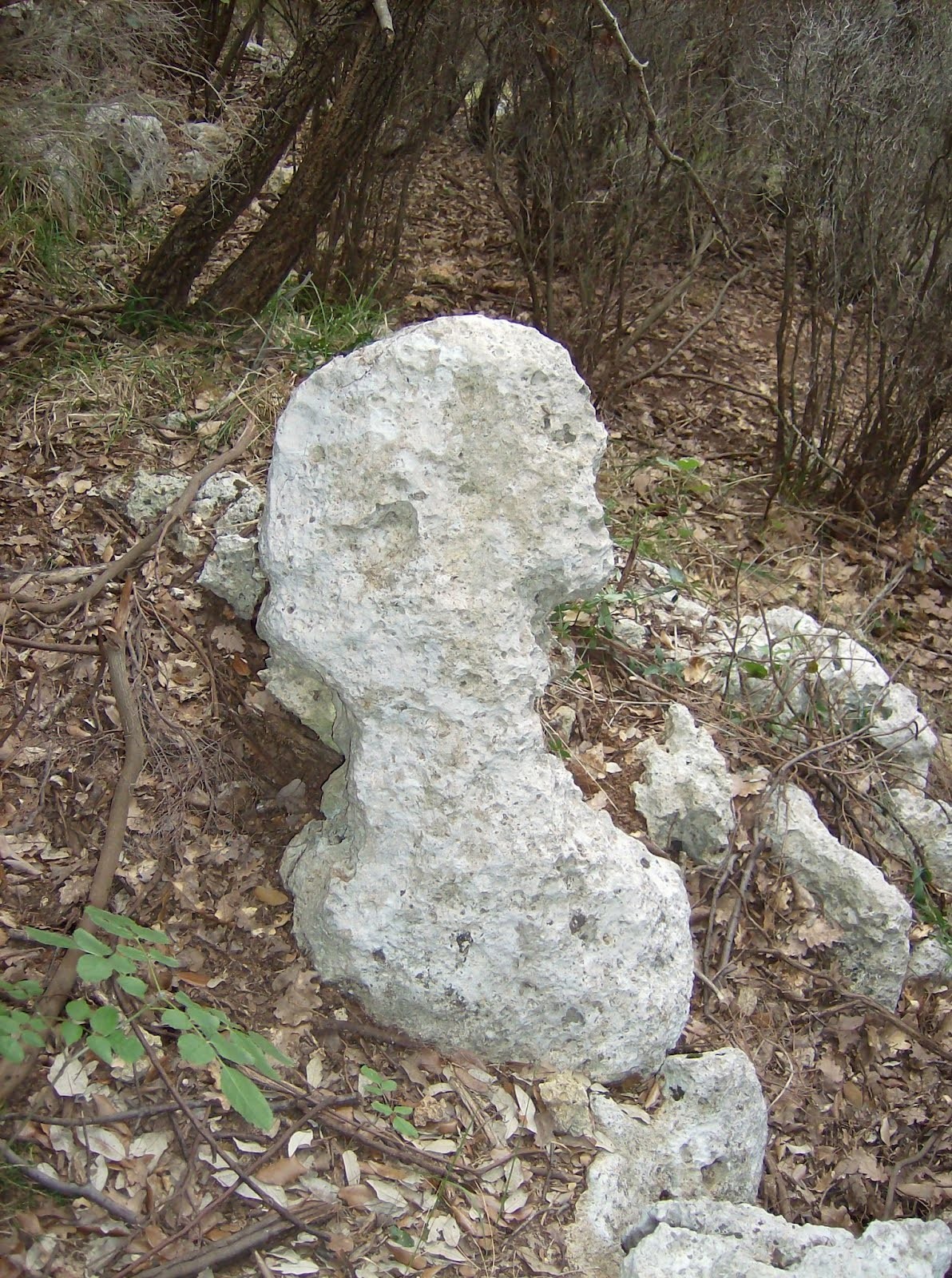 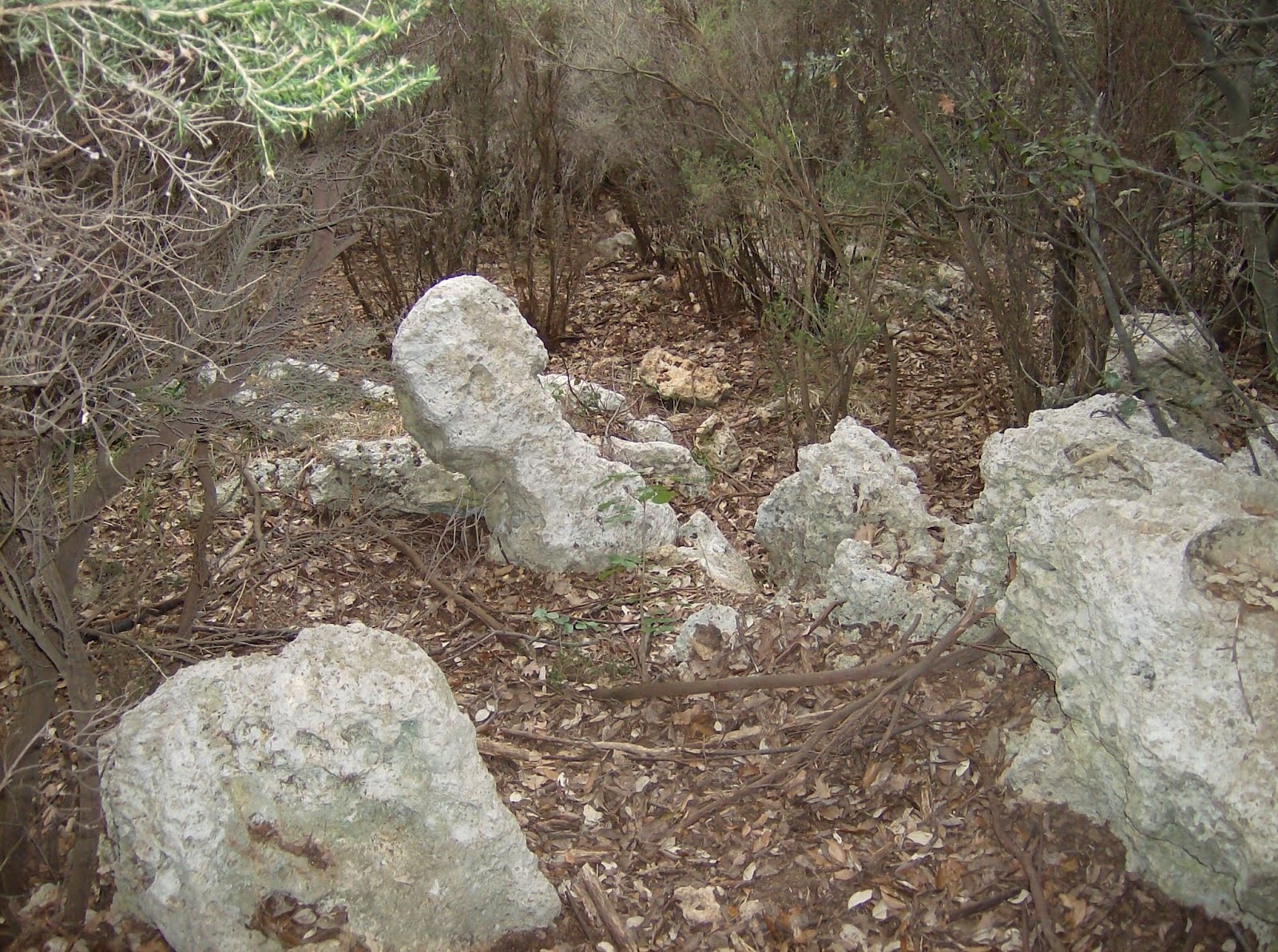 Photo 3: The wall and Stele of Pila delle Penne

The religiosity of the prehistoric man was directed, according to the most current theories, to the veneration of the peaks of mountains, springs, rivers, trees, weather phenomena (thunders and lightnings) and from the celestial bodies, especially the sun and the moon. 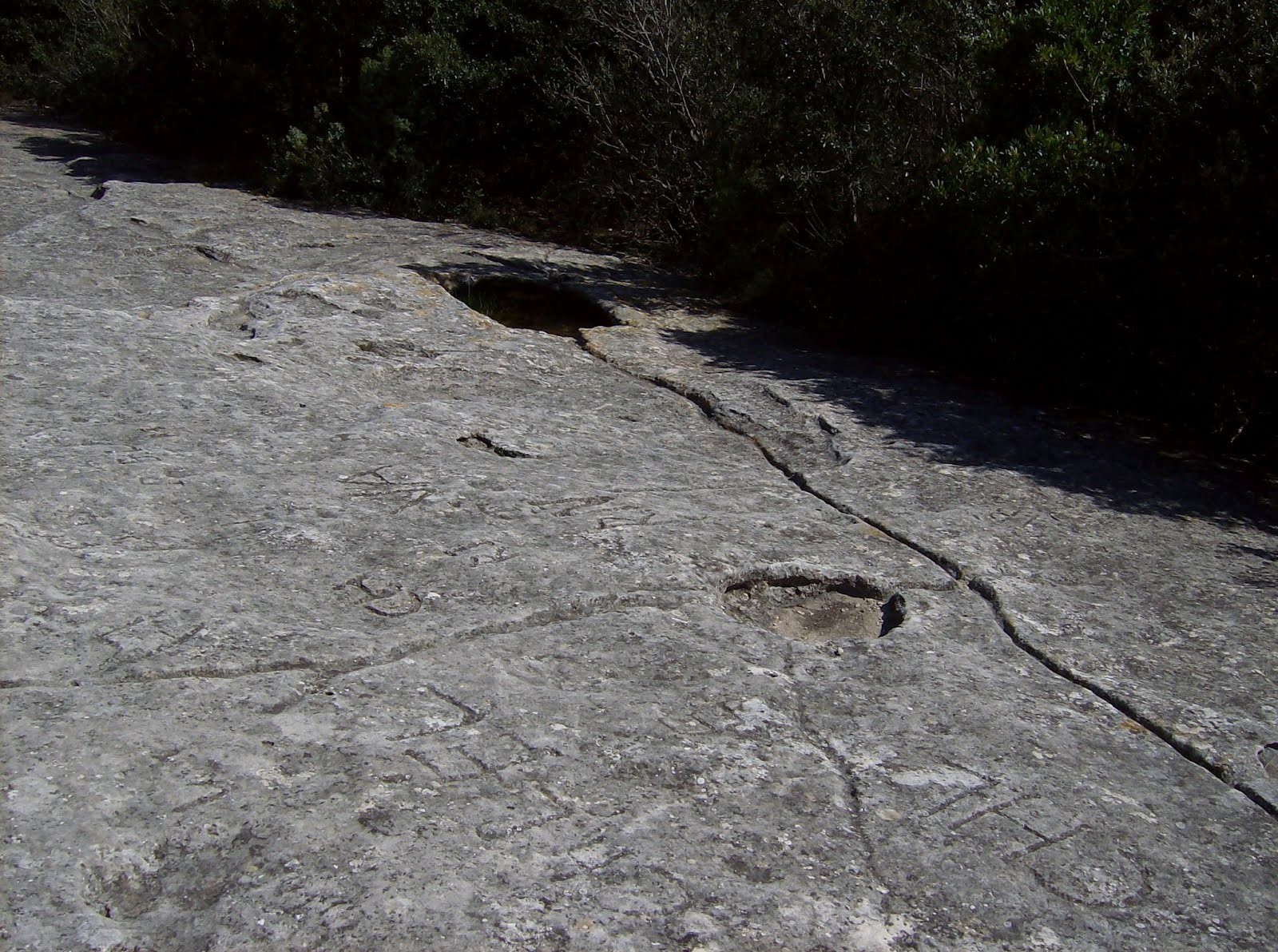 The dating of these archaeological remains is not unique. The existence of other similar structures in the European area, is well known.

We remember, in fact, what has reported in numerous studies that refer to the sanctuary of Panoias, (Northern Portugal). Here, beside a large rock with ponds, canals and cups, there is the following Latin inscription dating from the third century AD (11):

(i.e. “Here the slaughtered victims are consecrated to the Gods: their entrails are burnt in the square ponds and their blood is diffused along the surrounding small ponds”).

Large rocky outcrops, with characteristics similar to those described for the sanctuary of Panoias, in the Finale, could, at least for a certain period, have had a similar function.

The fact, moreover, that the “altar-stones” are built on high ground indicates, probably, the desire to choose an appropriate site for have a sort of visual inspection of the land below, also in relation to the sacredness of the hill stations and mountain peaks, typical of the Ligurian-Celtic populations.

Dolmens and Menhirs are not, therefore, unrelated to the Finalese and sub-alpine cultural area, as it was thought until a few decades ago (Photo 5, 6, 7). 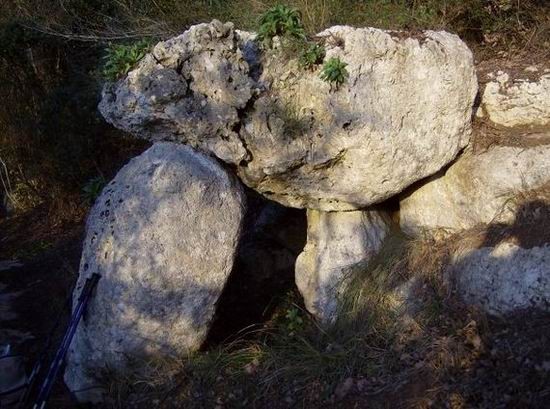 Photo 6: The Dolmen of Monticello 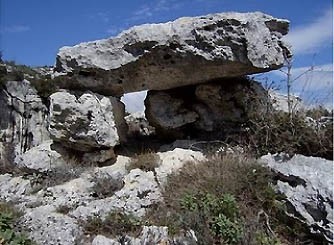 Photo 7: The Altar above Arma Strapatente

It believed, in fact, that the megalithic culture had been arrested in the Alps region, without crossing the Alps only exception was the Pugliese area (Southern Italy), where dolmens, menhirs, specchie (i.e. mounds of stones) were attributed instead to the influence of people from the Balkan Peninsula, across the Adriatic Sea, while in the rest of the Mediterranean basin, the megalithic is well represented.

Regarding theLiguria, in the second half of the eighties of last century, in the northern Sanremo hinterland (ImperiaProvince), were identified two circular burial mounds. One of them, studied with stratigraphic methods from the local section of the International Institute of Ligurian Studies, has been attributed to the final phase of the Bronze Age (1).

The penetration of megalithism in this Region was thus demonstrated, presumably from the nearby Provence.

Consequently, other artifacts found in Liguria, especially in the area of Finale (just mention the Menhir and Dolmen of Verezzi), until then attributed, though with reservations, to the recent rural culture, took on a different meaning and scarcity of megalithic remains in Italy, differently from the transalpine regions (especially the North-Western and the islands), could be explained by the increased turnover of civilizations over time, that would have radically transformed the appearance of the area, resulting in the loss of many of these artifacts (7), (8), (9), (10).

The Religious Sense is born, therefore, from the remotest antiquity and the man has asked to identify rituals (worship of the dead) and to recognize the sacral presence in certain geological formations (e.g. mountain peaks) or the construction of megalithic structures, like Menhirs and Dolmens.

These artifacts can be dated to a amount of time between the end of the fifth millennium to the late third millennium BC: corresponding, roughly, to a period ranging from the Neolithic and the Bronze Age (20), (26).

This length of time could be corresponding with that of other megaliths that have already been described by Scientists and by the Author.

The dating of the petroglyphs and megaliths described is a difficult problem to the present, because are placed outdoors and can easily modified by atmospheric and human factors.

The Stone Altar above the Strapatente Cave, the other Altars or “Stone Tables” on the tops of rocky outcrops of Finalese, the so-called Dolmen of Monticello (near Finale Ligure), the rudimentary anthropomorphic Stele of Pila delle Penne, the findings of the Plateau of San Bernardino (among which the Bric Pianarella Observatory and the Archaeoastronomical Complex of Marcello Dalbuono), but also other neighboring megaliths (2), (3), (5), (6), (12), (13), (17), (20), (21), (23), (24), (27), (28), (29), represent only some examples of findings that would deserve a more detailed study in the light of modern scientific knowledge (e.g. archaeometry, and archaeoastronomy, stratigrapy, geology, etc.) that could lead to important innovations in the area of Western Liguria and, especially, in the Finalese.

This paper is also available at: