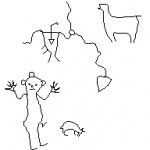 Ethnohistorical sources regarding the creation of rock art around the world frequently make reference to “little people” as the makers of rock art. As David Whitley (1991) has noted, this may be due to a taboo against talking about a dead shaman and not verbally distinguishing the shaman’s spirit helper or tutelary spirit from the deceased shaman

My ethnohistorical research with the Native American Ojibwa in northern Minnesota and elsewhere in the midwestern United States, indicates that Spreading Dogbane (part of the Periwinkle family), Catnip, and Deadly Nightshade were used by the Ojibwa shamans (who made the rock art) as hallucinogens. In researching atropine hallucinations (e.g. from Deadly Nightshade, a dangerous poison), I discovered a medical literature that indicates that people who take atropine hallucinogens and people in the second stage of alcohol withdrawal during delirium tremens (i.e. they have stopped drinking two to three days earlier) often see “little people” for half an hour.

As odd as this sounds, I would suggest that the effects of atropine and alcohol may account for the numerous reports of “little people” making rock art around the world.

Loud sounds often trigger the synesthesia that occurs in the later stages of altered states (such as banging a rock) and can result in the blending of foreground and background. This distortion of perception is commonly used in filmmaking to create the “lilliputian” illusion.

A similar lilliputian illusion would result from the use of atropine hallucinogens by the shamans who made the rock art to record their vision experiences.