Rock no. 20 of Redondo (Valcamonica) 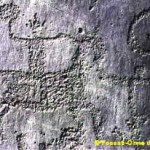 TRACCE no. 2 – by Elena Marchi

In Anati’s chronology (1) the Iron Age corresponds to style IV, put in sub-groups by De Marinis (2) and Fossati (3), that is:

Every sub-group has a different chronological phase and a dissimilar figurative style. After the schematic style of the IV 1 phase, defined geometrical-linear, there is the pre-naturalistic style in the IV 2 phase, which introduces the descriptive naturalism of the IV 3 phase. The final phases are still characterised by naturalism but with considerable traces of decadence, which will culminate in the IV 5 phase.

Rock 20 of the Redondo site, in the Capo di Ponte municipality, is rich in innumerable engravings attributed to the IV style, like a lot of rocks in Valcamonica. It is a completely exposed vertical surface , 6 metres long and 4 meters wide. It is sandstone, like most of the engraved rocks in Valcamonica. The rock is placed on the orographic right side of the Oglio Valley. The area is characterised by the presence of a considerable group of engraved rocks, studied in 1970 by Paul Louis Van Berg and R.C. De Marinis. Starting from 1993 I studied and traced this rock for my thesis. The rock has 163 figures engraved with the hammering technique:

These engravings belong to the Iron Age, except for the Latin alphabet, attributed to the Roman Age. The 132 superimpositions among the figures permit the establishment of 4 phases: 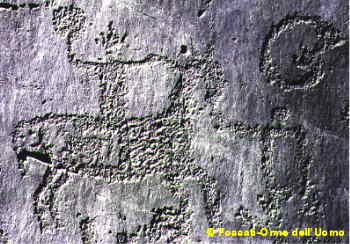 The artefact figures are very important within the scratched engravings: the 5 knives with sheath are comparable with the Benvenuti knife (VI-V Cent. BC) of the near Este culture. It is very difficult to establish the meaning of these engraved knives on the rock: perhaps they are ritual and symbolic weapons. In fact in the Iron Age the weapon figure is not a pars pro toto symbolising the man figure as in t he Copper Age. Also the pot figure can be placed in the sacred or ritual world: it is a one-handle jug, with spout and conical body, like a Schnabelkanne. The pottery figures are very rare in Camunian Rock Art.

The hammered engravings of Rock 20 are more varied compared to the scratched figures. They are of IV 3-4-5 styles, that is from naturalistic style to decadence. A pregnant mare figure is very interesting, with the little horse in the womb. The type of the engraving seems one of the X-ray engravings, present also in India and in the Sahara Rock Art. For the Valcamonica this is an unicum.

In Camunian Rock Art the figures of warriors, of duels, of weapons, of ritual pots, of hunting in the Iron Age are connected to the youth initiation rites of the aristocratic warriors. The engravings are like gifts to the Gods on occasion of these rites.