The State of the Research (Alpine Arc) part * 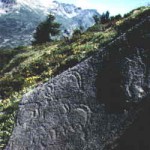 TRACCE no. 2 – by Angelo Fossati

The state of the research: Alpine and Italian post-palaeolithic Rock Art 1990-1995

In the western areas of the Alps different new sites have been brought to light.

back to index
The discoveries have been so important that a notable exhibition “Images from the Prehistory. Rupestrian engravings and Paintings: new messages from the rocks of the Western Alps” was conducted by a group of institutions as the Archaeological Superintendency of Piedmont, the Civic Museum of Cuneo, and the “Footsteps of Man” of Valcamonica (1).

The prominent area in the region is the Susa Valley. Here, especially during the last four years, some rocks engraved with spirals, meanders, labyrinths, weapons, crosses and human figures were discovered (2)(3)(4) .

The meander and spiral phase precedes the weapons and warriors period, and can be dated, due to the sumperimpositions, to the Bronze Age.

The axes are quite easily comparable with the so-called hellebardenaxt and datable to a period beetwen the 3rd cent. BC and the 1st cent. AD (5). 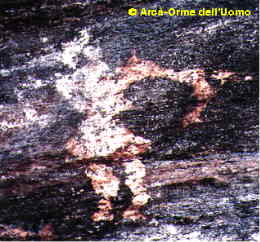 In this area rock paintings are also known. We could observe a group of paintings depicted in white representing warriors, riders and zoomorphs (6). The weaponry usually consists of bows and arrows, and in an oval shield.

To better understand the chronology of the paintings it is important to study the style of the figures, called geometrical and bi-triangular.

In Piedmont again a rock painted was found in the Alpe Veglia at the Balm ‘dla Vardaiola, a rock shelter with a single painting resambling a deer figure that was attributed to the Neolithic (8).

An area of great interest in the western Alps is the Haute Maurienne, in France. The major site in this area is Aussois. Discovered in 1977, the site has been recently studied by F. Ballet and P. Raffaelli (9). They have brought to light hundreds of figures, engraved on marble rocks polished by the glaciers, chronologically distributed between the end of the Bronze Age and the contemporary ages. The figures attributed to the prehistory present meanders and spirals, warriors depicted in the bi-triangular style, hunting scenes where the animal hunted most of the time is the ibex, chariots, topographical representations, weapons (axes), footprints.

We can find many points of comparison to the Camunnian Iron Age rock art. 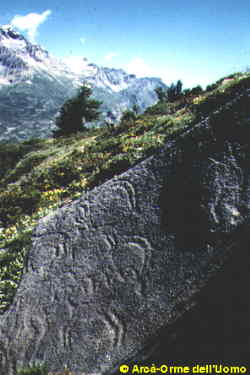 Another site recently discovered by A. Arcà of the “Footsteps of Man” is called “The Rock of the Ibexes” at Lanslevillard, where once again the animal hunted is the ibex. The scene is dated to the 5th cent. BC.Probably ibex hunting has a meaning that can be compared to that of the deer (10)(11).

In Val Grana some schematic anthropomorphic figures were found on two limeschist rocks (12). On these rocks we can find schematic anthropomorphs represented by open arms, sometimes a dot in the middle of the legs, to symbolize the female sex, and two dots near the bust as to represent the breast. Some authors have suggested a Bronze Age chronology for the Val Grana figures (13), but comparisons can be made with the anthropomorphic figures of the Copper Age in Valcamonica. These figures are not the only ones in the all Western Alpine Range that can be compared with the camunnian engravings attributed to the Copper Age: we must remember the newly discovered daggers of the remedellian type engraved in the Ubaye Valley (France) where some neolithic paintings also appear, in one case overlapped by a dagger (14)(15).

The rock art of Albedosa Valley was discovered by a local enthusiast, R. Amisano, and studied in 1995 by the team of the “Footsteps of Man”. The most important rock is called Saingiu dei Strie (Rock of the Witches), where footprints, snakes, cup-marks and crosses are engraved, probably starting from the Iron Age.

G.M. Cametti and P. Meirano of the Gruppo Ricerche Cultura Montana of Turin, a very active association in Piedmont, in July 1995 discovered a group of rock engravings in Valcenischia, west of Turin. On limestone rocks warriors figures and squares are engraved. Some of the warriors have a rectangular body, and are comparable with the armed figures of the last phase of camunnian Iron Age rock art.

But now we must talk of one of most famous rupestrian areas in the Western Alps: the Mt. Bego, whose petroglyphical complex has been completely and newly studied by the French team of H. De Lumley (16). The area has been divided in 23 zones that contain 3,639 rocks engraved and a total of 32,382 petroglyphs engraved on sandstone of different and beautiful colours.

The typology of the figures is not as wide as in Valcamonica rock art:

The zoomorphic figures with horns (also called bucranes) are certainly the most numerous, often depicting ploughing. Among the weapons, daggers and halberds are numerous, but only few axes are represented. The halberds and the daggers have been recognized to be very similar to the Copper and Old Bronze Age types; the study of the weapons within the figures with horns or the topographical representations has given indications for these too, which De Lumley put in the Copper Age and in the Old Bronze Age (2,500-1,700 BC).De Lumley has also given attention to the interpretation of rock art: the Mt. Bego is a sacred mountain where the figures engraved are the result of a symbolic language written by human groups that had an economic pastoral way of life (16)(17).