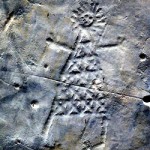 Ubaye historic petroglyphs are under survey and study; they may unveil many data about traditional mountain shepherd life, culture and skills. It’s a poorly known and fragile heritage, which must be properly protected and appreciated.

Ubaye’s Valleys are located in South-eastern French Alps, nearby Italian border. The survey of historic petroglyphs started 25 years ago with the Pierre MARTEL pioneering work; now about 6 000 engraved signs have been identified. A potential of 25 000 petroglyphs is still to be checked.
At this stage, it is possible to present a reliable analytical work on many topics: history, genealogy, traditions, beliefs, political convictions, philosophy and even ecology (even before this word has been invented). And more, it is evident that this heritage cannot be reduced to the sole contribution of idle and simple minded shepherds: this is a frequent and lazy statement.

Facing such a complexity, my proposal is to limit this tour to some samples, trying to highlight:

– the “fantasia” of many engraved signs;
– the obliteration practice over previous engravings;
– the persistence of incision tradition;
– the engraving techniques.

Anybody focusing on petroglyphs can notice that some rocks show a remarkable high density of signs. Some reasons for this choice appear to be logic: these rocks may have been situated near meeting points, lookout posts, dwellings or sources. Besides this, most of “ clusters” location reasons remain still unexplained. 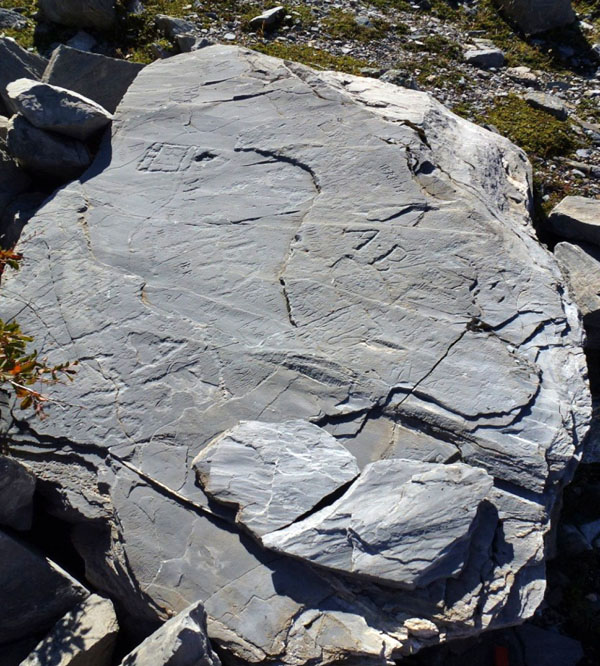 Fig. 1 – More than 30 engravings are present on this slab, from 18th century to 20th. Most are incisions, some are hammered while closest stones don’t show any engraving trace

Regarding religious and magic practices, celebration of an important event remain an hypothetic, poor, and hardly acceptable explanation, too sophisticated to be pertinent. The only fact to consider is that the carver generally does not take care of the rock characteristics in terms of its facility to be engraved, surface quality and available space for the engraving; it seems that the priority is to commemorate “here” and “immediately”.

With the same logic, “obliteration” is frequent; perhaps the follower did not see previous engravings. This is understandable for anybody dealing with petroglyph research. Many signs are so weak that only repetitive inspections allows to discover them. This may be also compared with the usual practice of neolithic monument builders which recycled with apparent nonchalance the monoliths of dolmens. More understandable are obliterations performed by competitors (shepherds). In most cases the competitor does not delete the previously engraved signs, in such a manner that the intruder should understand that he is not welcome. 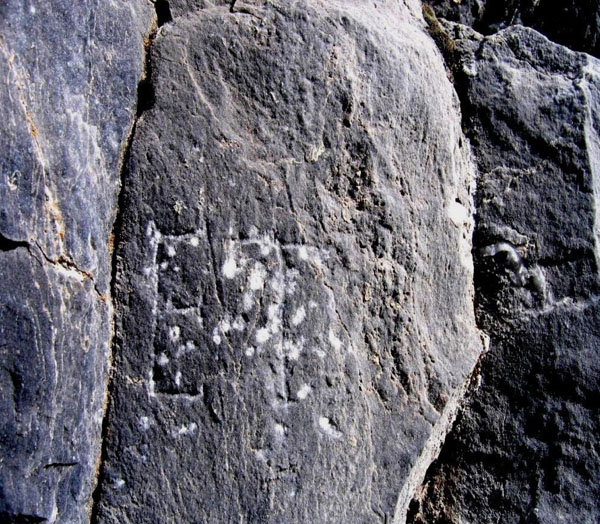 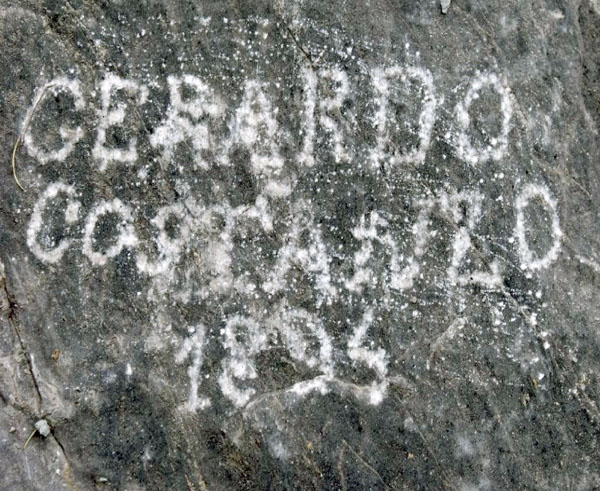 The unusual practice of covering engravings with a ground layer is not necessarily related to competition; of course these cases are distinct from mountain erosion effects. No clear explanation can be actually offered. 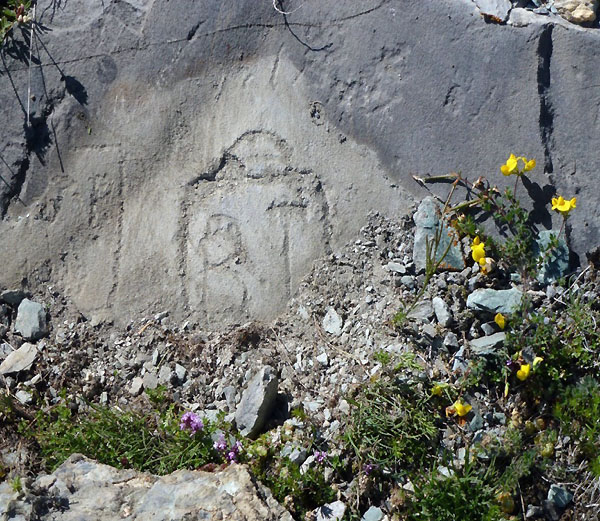 Fig. 4 – I exhumed these engravings, which were covered by ground and walled-up with a flagstone

About odd traces, here I show an unexpected figure (see below). First of all, I was so puzzled by the quality and by the care of a set of peckings that I started to trace it; at the end, I realized that it looked-like… an elephant. 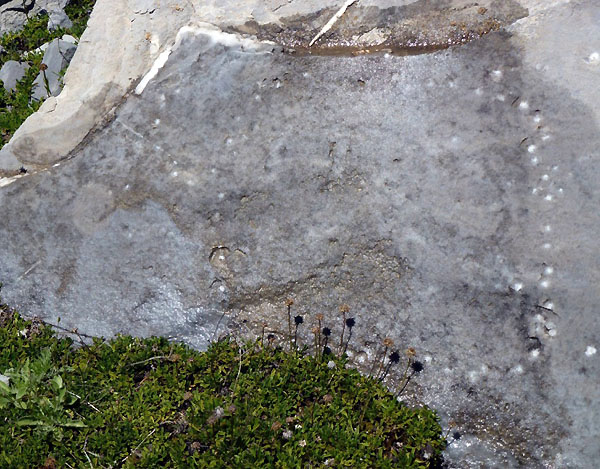 Fig. 5 – Is it the joke of a shepherd ? This stone bears also at least one engraved figure featuring animal horns in a lyre shape, upper right part of the “elephant”

The controversy about the way that Hannibal choose to cross the Alps is still unsolved; Ubaye valleys might have been used. Regarding this figure, my feeling is that we are facing the joke of some shepherd. The cultural level and the mood of Ubaye’s shepherds are very well illustrated by many engravings and would need pages of analysis. At least three other engravings of different age and technique coexist on this same stone and even under the “elephant” figure.

Moving to “recent past”

Shepherd REVERTEGAT wrote: “YVON REVERTEGAT, le 10 Aout 1943, L’AN DE LA GUERRE DE SICILE”. It’s a poor quality engraving, but highly significative; this simple shepherd wants to express his hope and happiness, hearing about the US landing in Sicily on World War II, exactly one month after the landing. The clear view of important events is very well illustrated by numerous other engravings in Ubaye, from French Revolution to present time. A complete analysis of these documents would show an unexpected selectivity and an accurate sense of History. 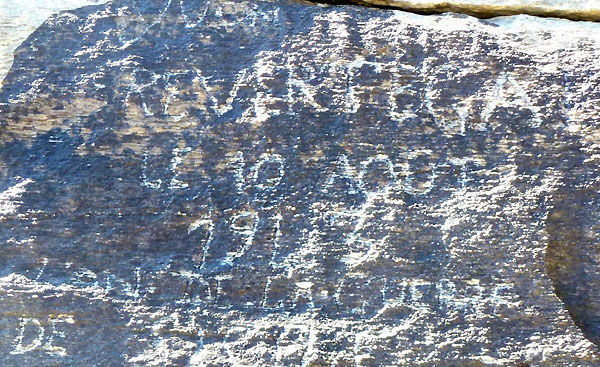 Fig. 6 – Yvon Revertegat left several engravings which allow to understand his management of the mountain pastures

And nowadays, this poetic engraving dedicated to the little Massil (Massilia is the greek name for Marseille city) is a part of a very complex and sophisticated set of engravings dated to the end of the XXth century. 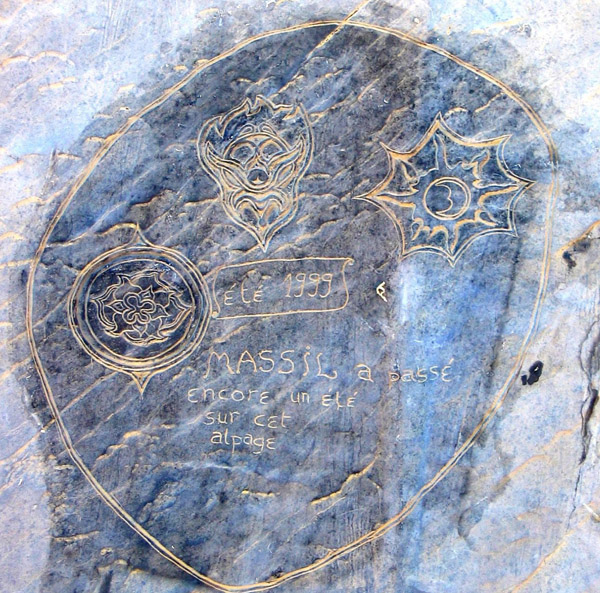 Fig. 7 – Stone carving is still a vivid practice in Ubaye with an unexpected artistic refinement

This leads us to some considerations about Ubaye’s petroglyphs:

– most of them have a small size and incisions are very thin and accurate; this can be correlated with the shepherds traditional skill to use a knife to ornate their sheep collars. The nearby Queyras Valley is famous for that, but its traditional symbols (“rosaces”=roses) are absent here;

– part of petroglyps are made by hammering with a pick, surely not with an hard stone as usually stated, which would be inconsistent with accuracy and feasibility. Knifes, picks and hammers were also utilized; shepherds may also utilize strong forged nails, normally used for sheepfolds building.

– layout the glyph;
– incision of the line;
– broadening by repetitive abrasion, in “U” or “V” shape or by rotation, leading to pecked dots, the confluence of which leads to a “cordate” or “pearl-necklace” shape which is frequent in Ubaye. 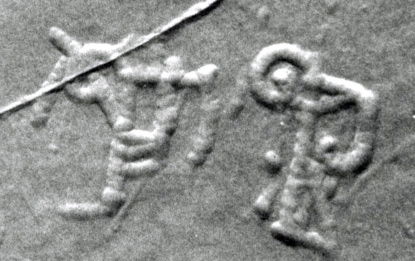 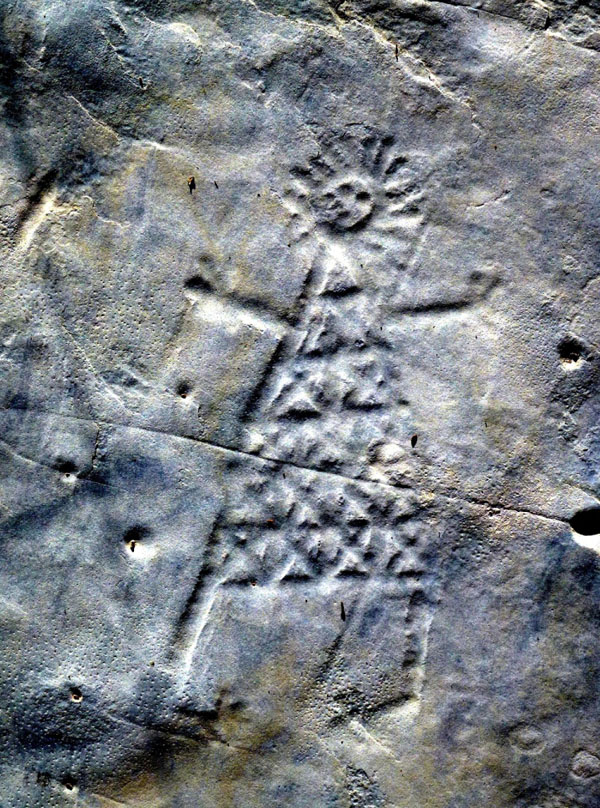 At the end of this trip, it is clear that this heritage cannot be neglected and needs more efforts to carry-out its inventory, analyze its engraved figures and work on documents which are often the only traces that simple people left. It is also obvious that most of these sings are able to exhibit powerful aesthetic characteristics linked to their environment, to the rock features and to the calligraphy quality. 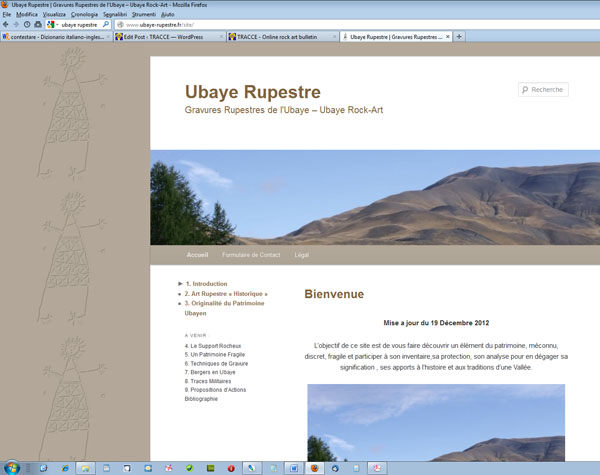