Direct dating: does it work? 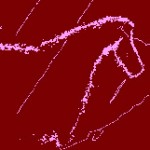 Direct dating: does it work? The Côa Valley experience. For the first time in Europe supposed scientific direct dating methods on open air rocks have been applied. According to the necessity of doing an experimental test, the site chosen was little and not relevant: the Côa Valley petroglyph site, the first European open air rock art site in palaeolithic style.

The work has been commissioned by the EDP, Electricidade de Portugal (Portuguese Electric Energy Company), the most interested in a (recent) dating of these petroglyphs, and in their preservation (under water).

The fact is that in Côa Valley a big dam is under construction. I suggest reading Mila Simões de Abreu – Ludwig Jaffe text for better information.
Two different kinds of direct dating experiences have been tested: AMS14C on silica skin (Watchman) and microerosion (Bednarik). I’m referring to NEWS 95 International Rock Art Congress pre-acts.
The micro radiocarbon dating (AMS) on silica skin is a method trying to catch (and date) sedimentary organic matter encapsulated by silica, which year by year (and century by century) makes accretions on every rock surface.
Watchman’s experiencefound a 7000-3000 BP ranging in carbon from silty brown accretions inside Côa engraved figures. But Watchman also found that :

Watchman himself says that there are some calibration problems in this kind of dating, always affected by environmental conditions.
Rejecting AMS dating obtained by himself and sustaining that silty brown accretions started from 1700 years ago (by pretending that only in this time man began to cultivate this area), he claims to date the Côa valley engravings between 1700 and 100 years ago, it means 300-1800 AD.
Grandfathers of some local Portuguese archaeologists perhaps engraved some of them.

It is based on microerosion analysis and internal analysis. Microerosion analysis is experimented by very few researchers by watching rock surface with a kind of geologist eyeglass.
In this way it is possible to examine the erosion of little crystals on rock surface, affected by weathering (water-wind-temperature).
Although “attempts to achieve microerosion dating were hampered by poor suitability of the schistose facies and the lack of reliable calibration”, Bednarik claims that “the most Palaeolithic stylistic features are generally less than 3000 years old”.

In which way is it possible to examine the erosion of little crystals on rock surface?
We don’t know. How to obtain a calibration curve?
We know only that some Copper age engravings (5000-4500 BP, haute Ubaye) on marble in the Alps, in open air (but not directly affected by rain), at 2400 m above sea level, have no patina, are white while the rock is orange (the same occurs in M. Bego), and that we can distinctly recognise each engraved dot.
On the contrary we know that by now no one can recognise some 100 years old engravings in open air, on limestone (1000 above sea level) exposed to rain and wind. We also know (by a long direct experience in seeing every kind of engraved sign) that there is a big difference between engraved figures on a vertical surface and signs on a horizontal surface. We know that patination and erosion depends on kind of rock, surface exposition, environmental condition, temperature, human pollution…
Do these conditions take full place in direct dating Côa calibration curve? Which experience in a rainy European climate has been tested? Why reject stylistic analysis completely, when they are based on archaeological and cultural considerations?
However, we have good luck:

Andrea Arcà
back to index