Rupe Magna, the biggest engraved rock in the Alps 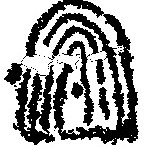 Rupe Magna is situated at Grosio, Valtellina, northern Italy. It was found in 1970 by Davide Pace, simply scratching away the moss stratum. The nearest Rock Art of Giroldo was found by the same Pace five years before. 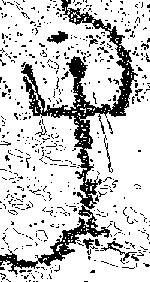 5454 figures have been counted after the tracing work

Rupe Magna (from latin, simply big rock) is a large surface polished by the glacier, completely engraved during prehistoric periods. Near the rock there are two ruined middle age castles (Visconti-Venosta family).
Rupe Magna and the two castles take part in Parco delle Incisioni Rupestri di Grosio (the Engraved Rock Park of Grosio), which take care of archaeological and historical heritage with panels, guided tours, school programs.
In summer 1990 Footsteps of Man were charged to begin the whole tracing and recording of Rupe Magna. This work was completed in spring 1995 after 780 plastic sheets and 342 square meters of engraved surface traced. Each figure has been recorded in database (by a clipper application), with measures, typology, description and under/overpositions.
69 different kinds of engraved figures were noticed, being able to understand at the end of the work the sequence of engraving periods.
First figures belong to the end of the Neolithic – beginning of the Copper Age (spirals, repeated arcs), by comparison with megalithic Rock Art.

In the Bronze Age we find schematic anthropomorphic figures (so called “orants”, with symmetric arms and legs, probably fighting), which continue in the first Iron Age with couples of men duelling and a few animal figures. Cup marks cover every other figure and represent the last engraving period (middle Iron Age).
With its length of 84 metres and width of 35 meters Rupe Magna is the biggest engraved rock in the Alps. It contains more figures (2987 taking away not significative dots) than rocks like “Altare” (M. Bego) and “Grande Roccia” of Naquane, Valcamonica.
The whole tracing is reduced 1:8 in 86 sectors. So each figure is identified by letters and number, like for example RPM-AA-112, which means figure 112 of sector AA of RuPe Magna.
The tracing method is the same used in Valcamonica: it consists of reproducing dot by dot on a transparent plastic sheet each engraved point found on the surface.
Rock Art of Rupe Magna is very close to Valcamonica Rock Art, with strong likeness in periods and styles. In this way it is easier to interpret it.
In October 1995, a book was published, containing archaeological description and interpretation of figures and periods, and the whole tracing.