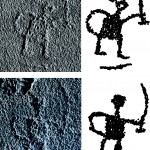 The discovery was made by G.M. Cametti and P. Meirano, researchers of Gruppo Ricerche Cultura Montana of Turin (a cultural association studying alpine culture and heritage).
On many limestone rocks, laid by the glacier and polished by the same glacier and by the wind, it is possible to see (only with grazing light) figures of warriors and topographic engravings.
Some warriors present a square body, in the typical style of the last Iron Age in Valcamonica. Another figure (the one represented in negative and positive) draws a sword, in a dynamic posture that seems to represent an armed dance, still alive in popular tradition, called the dance of “Spadonari” (men with swords).

The rectangular figures filled by regular dots are linked to the ones found in the near French valley of Haute Maurienne, and represent probably some topographic elements, like in Valcamonica in Iron Age maps.
The site is now covered by meters of snow. A work of documentation, with survey, recording, tracing and moulds is prospected next summer. This work will increase the catalogue of engraved rocks in the western Alps, based on the international file, used by Italian, French and Swiss researchers.
Rock Art of the western Alps, except M. Bego, is not as huge as the one of Valcamonica. The fact is that there is not sandstone in these valleys. New finds on limestone in Val Grana (schematic antropomorphs), Val Susa (Iron Age paintings), Val Cenischia, Haute Mauriennne (warrior with weapons, hunting scenes, inscriptions) are taking Western Alps Rock Art into a most important place in alpine Rupestrian Archaeology.