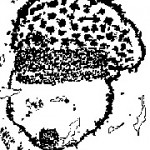 The Settled Ground
in the “Topographic” Engravings
of the Alpine Arc

The most recent studies, deriving from survey of the Vite area (1), have demonstrated that:

Point one is demonstrated by the rocks of Vite, where the first phase is made up of “macule”, totally pecked pseudo-rectangular areas on which double-based rectangular figures are superimposed. Other morphological elements are the contoured figures filled with dots, the contoured oval figures, often with a central point, the grid rectangles, the filled rectangles, the perimetric lines with eyelets. The same forms are found in the underlying zone of Dos dell’Arca (2), where they are by Sluga disputably interpreted as sex symbols. 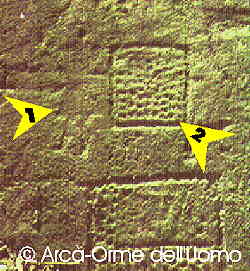 It appears obvious that there does not exist any relationship between this kind of topography and other engravings such as the famous “map” of Bedolina, placed by Anati in the last phase of the III style, i. e. at the Final Bronze (3), or topographic engravings at Aussois (France, see picture and Ballet-Raffaelli -4-). The stylistic differences are great: at Bedolina the geometric modules are square instead of rectangular, they are always contoured and never totally pecked and the alignments of dots are much more precise. In many cases there is then a central dot surrounded by a ring, and this convention is totally absent in the topographies of Vite and Dos dell’Arca. The topographic figures of Bedolina (and also some at Sellero -5-) in many cases are superimposed on men with weapons engraved in the first Iron Age, and appear to be subsequent to them. So they can be dated to the middle or final Iron Age.

Instead, regarding the second of the above points, the pre-Remedellian age (6) of the most ancient phase of the topographies is very clear. This is demonstrated (7) by the engraved menhirs of Bagnolo I, Ossimo 8 and Borno I, where filled rectangles with double base, macule and alignments of dots are subjected both to the Remedellian and “campaniformi” phases. The same “village-maps” of Vite present eyelets in the perimetric lines very similar to those of the Camunian and Valtellina chalcolithic stelae.

The chronology of the orants, presumed neolithic until now, and so placed at the base of the camunian cycle (to shift instead between the middle Bronze and the first Iron Age) is currently being revised (8). The necessity of such a revision is shown by Ms Ferrario when she demonstrates the lack of any underposition to the Remedellian phases and the similarity with the warriors of the Final Bronze. To these arguments one could add the repeated co-occurrence of figures of orants and Iron Age figures. Such recurrent co-occurrence makes impossible an interval of over 3000 years between the figures, which instead are more likely to be part of a contiguous series.

Once the orants are placed in the Middle-Final Bronze, the pre-Remedellian topographic engravings constitute the first phase of Camunian rock art and they fit in well in an interpretative picture tied to an agricultural-pastoral economy.

De Lumley’s general interpretation of the engravings of Bego is based on the theory of the expression of the divine. This involves a religion of the Sacred Mountain which sees its central expression in the primordial divine couple of the God Sky (male) and of the Goddess Earth (female), symbolized respectively by the bull-thunderbolt-knife and by the cultivated enclosures-fields. In this context the topographic engravings appear to represent both the earth and female divinity at the same time (the Goddess Mother, the God Earth).

Vite, rock no. 3: this kind of figure is very similar to the topographic ones found at Fontanalba, Mt. Bego

De Lumley’s chronology, amplified recently, concentrates the Bego engravings in a Chalcolithic-Ancient Bronze time range (2500-1700 B. C.), hypothesizing a greater ancientness of the Fontanalba sector compared to those of the Meraviglie (end Chalcolithic-Ancient Bronze). In reality the compound geometric figures are identical to the pre-Remedellian topographies of Valcamonica. Archaeological excavations done at Bego (Gias del Ciari, Conti 1942) have shown a human presence starting from the cardial Ancient Neolithic up to the Chalcolithic and the Ancient Bronze.

Such a hypothesis is confirmed by several superimpositions present in zone XIX where both drawings of horned animals and knives with elongated triangular blade superimpose the rectangular topographic figures. Unfortunately, study of the superimpositions is not facilitated by examination of the tracings, which do not distinguish between underpositioned and superimposed figures.