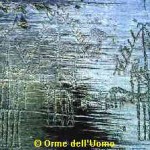 TRACCE no. 3 – by Emanuela Tognoni

The architectural representations carved on the rocks of Valcamonica are commonly interpreted as constructions: dwelling-places or temples, real or imaginary buildings.

The figures belong, as most other carved figures in this alpine valley, to the Iron Age, divided into 5 stylistic phases (IV-1/IV-5), which cover the period from the 8th century B.C. to the 1st century A.D. (1)(2)(3).

The figures of constructions are carved from a frontal perspective and face valley-bottom; they can be isolated, in pairs or groups, and also in various sizes. They are the “skeletons” of constructions, seen from an “X-ray” viewpoint, and they can be divided into three elements (4).

The base is an important element: it is possible to distinguish two main types, one with a single central groove, one with several smaller grooves.

The decorative or reinforcing elements are secondary elements, not always present; sometimes there are the ladders leading up the side of the main body. Usually the out-jutting portions of the roof beams are present, shown as reinforcing elements for the roof, and the ornamental elements placed on the joining of the main supporting root are frequent: beams, on the apex of the roof, or at the end of the cross-beams.

The analysis of the architectural representations of Rock 57 (Rock Art National Park of Naquane) has made possible to elaborate a chronological sequence which is confirmed by the analysis of numerous other figures of constructions carved in various areas of the Valcamonica (5).

The criteria adopted to differentiate the architectural figures are based on structural (the type of base and of roof) and stylistic differences. Stylistically, the figures evolve from simple and essential forms to more complex ones, both structurally and decoratively.

So, the figures have been divided into seven different types, corresponding to specific formal characteristics and different stylistic and chronological phases.

The typology so far elaborated shows that architectural representations appear in the Valcamonica from phase IV-2 and continue throughout the Iron Age, until the end of camunnian rupestrian art. These figures therefore are part of the rich iconographic and thematic heritage of the aristocratic ideology which animates camunnian art during the first millennium B.C. (2)(3). 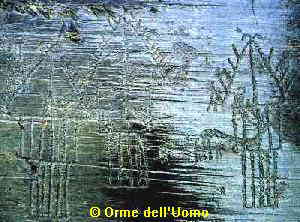 The exact interpretation of the architectural representations remains confined to a series of hypotheses. They could be the dwelling-places of the warriors, carved on the rocks to be consecrated to a divinity: frequent is the association between these figures and figures of warriors. Another recurring association is between constructions and footprints, which are certainly symbolic and probably related to initiation rites (6). The frequent association between constructions and ornithomorphic figures is connected with the sacred world of initiation rites for the magical and apothropaic value of the ornithomorphic figure, connected with the funerary sphere through the motif of the solar boat (3)(6).

In conclusion, the direction to be followed in the study of camunnian architectural representations is that of the warrior aristocracy which played such an important role in the iconography of the Iron Age in the Valcamonica and its initiation rites.